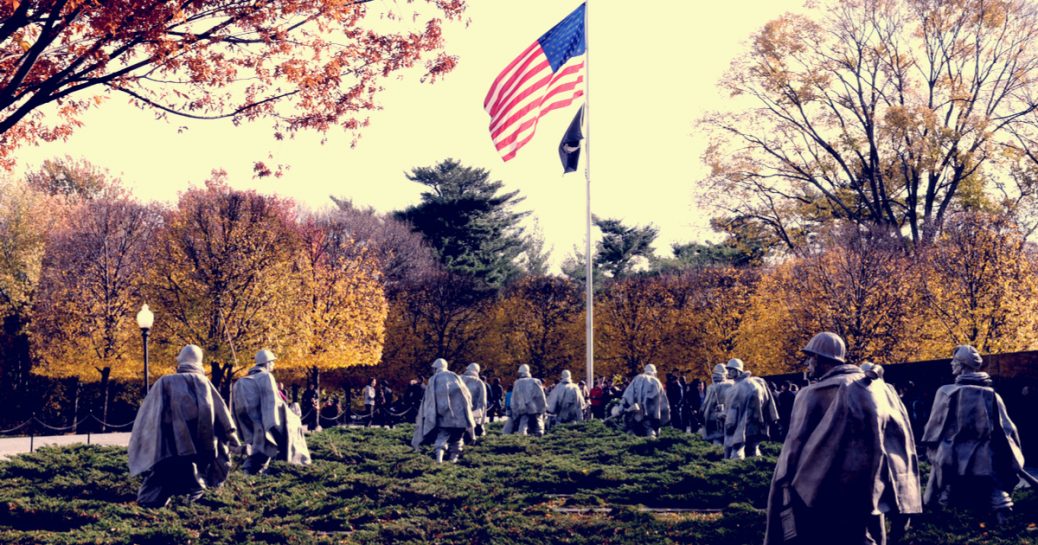 Vice President Mike Pence was in Hawaii earlier this week to receive the long-awaited remains of our fallen soldiers who were finally being returned by the North Korean government.

Here’s what Pence had to say:

Transcript from the White House:

Governor Ige, Admiral Davidson, General Brown, Lieutenant General Brown, Rear Admiral Crites, distinguished members of Congress, honored guests, members of our Armed Forces, and most of all, veterans from our Korean War, and the cherished families of our missing fallen:

Thank you for joining us for this historic occasion. And allow me to extend greetings and great respect to all those gathered here from our Commander-in-Chief, whose leadership and compassion brought this day about — the 45th President of the United States of America, President Donald Trump.

The Good Book says, “If you owe debts, pay debts; if honor, then honor; if respect, then respect.” And we are gathered here at this Honorable Carry Ceremony to receive 55 flag-draped cases, which we trust include the remains of American heroes who fell in the Korean War.

Some have called the Korean War the “forgotten war.” But today, we prove these heroes were never forgotten. Today, our boys are coming home.

President Trump asked me to be here on this day, on his behalf, and honestly, I’ve never been more humbled to be asked to represent him.

You see, as the Admiral just said, my dad, Lieutenant Ed Pence, fought in combat in the Korean War. He came back with a medal on his chest. But my dad — gone now 30 years — always told us that the real heroes of the Korean War were the ones that didn’t get to come home. And I just know there’s no place Dad would rather have me be than here with all of you, welcoming these heroes home.

Sixty-five years ago last week, the armistice was signed to bring the Korean War to its close. From the moment the guns fell silent, American soldiers returned home, some to their families and futures, and some to their eternal rest. But more than 8,000 Americans did not come home at all.

Our nation has worked tirelessly to keep our sacred promise to leave no man behind. And while several hundred of the missing fallen have been returned, for more than a decade, as a result of North Korea’s nuclear threats and escalations, search- and-rescue and recovery efforts have been suspended — until today.

On June 12th, President Trump traveled to a historic summit in Singapore with Kim Jong Un of North Korea. As our President entered into negotiations with North Korea, he also had our fallen on his heart. As he secured a commitment for the complete denuclearization of the Korean Peninsula, our President also secured a promise from Chairman Kim to return the remains of all fallen U.S. service members lost in North Korea.

I know that President Trump is grateful that Chairman Kim has kept his word, and we see today as tangible progress in our efforts to achieve peace on the Korean Peninsula.

But today is just a beginning. Our work will not be complete until all our fallen heroes are accounted for and home. We will see to it, in the days ahead, that these heroes will be the heroes who led the way to many more homecomings in the future.

Etched upon the wall of the Korean War Memorial is a tribute to the brave Americans who fought there. It reads, “Our nation honors her sons and daughters who answered the call to defend a country they never knew and a people they never met.”

At the time they answered that call, America was weary from war. Less than five years before, we had emerged victorious from the flames of World War II. But the end of that struggle marked the beginning of a new one, a war between the forces of freedom and the forces of communism. And 68 years ago, on the Korean Peninsula, the battle was joined.

On June 25, 1950, at dawn, communist North Korea invaded the free Republic of South Korea. Its armies stormed across the 38th Parallel. In just a few short days, they nearly succeeded in driving freedom from that peninsula.

America knew that this march would not have stopped in South Korea. Emboldened by a victory there, communism could have spread to every corner of the Asia-Pacific, toppling nations one by one. And so America resolved to stop communism’s advance in Korea. And we sent our best to do it.

Over three long years, nearly 2 million American patriots took up the fight. More than 100,000 were injured and 36,574 gave their all to defend our freedom and secure freedom for South Korea. And their acts of courage were no less heroic than that of their brothers-in-arms who stormed the beaches at Normandy or Iwo Jima.

They beat back relentless enemy attacks at the Pusan Perimeter for six straight weeks, and saved South Korea from being driven into the sea.

They came ashore at Inchon, and then pushed inland, retaking Seoul, the capital of free Korea, relieving their compatriots to the south and opening a crucial new front.

They made their stand at the Chosin Reservoir, surrounded and outnumbered 4 to 1 for 17 harrowing days and nights, as the temperatures plunged to 35 degrees below zero. They kept fighting until they broke through the enemy lines, and became legends.

From Heartbreak Ridge to Pork Chop Hill to Old Baldy, in foxholes, over mountains, and through rice paddies, they soldiered on. They drove back the enemy line, and the Armed Forces of the United States, together with our allies, defended our freedom, and won a lasting freedom for the people of South Korea that prospers to this day.

In just a few moments, the remains of some of those same American heroes were finally returned to American soil, draped in the colors of the country they served.

Today, they are known but to God. But soon we will know their names, and we will tell their stories of courage. They were soldiers, yes, but they were also husbands and fathers, brothers and neighbors, long gone but never lost to the memory of their loved ones. For generations, their families had only a black-and-white photograph to cling to, a faded letter, or the precious memory of an embrace on the day they left.

We don’t know who will come off these planes today. But we do know they are heroes all. Heroes with stories like Army Sergeant Dom Eritano, a World War II combat veteran from Ohio who went missing after a fierce battle on Hill 717. For his courage under fire, he was posthumously awarded the Silver Star and the Purple Heart.

Or they could be heroes remembered just like Major Charles Loring, who’d been held a prisoner by the Nazis after being captured in 1944. Less than a decade later, he returned to battle. On a sortie above enemy territory, near a place called Sniper Ridge, his F-80 was hit by anti-aircraft fire. And instead of diverting back to friendly territory, Major Loring directed his plane into the very enemy artillery that was threatening American soldiers.

They could also have stories like First Lieutenant Hal Downes. Hal trained for combat as the Second World War came to a close. He got married, had a son, took a job at a car company. But on his first day, as he said, before he even had a chance to sharpen a pencil, his wife called him to said he’d been recalled to the United States Air Force.

He went without hesitation. And on a night bombing run over North Korea, Lieutenant Downes was lost. He left behind his wife Elinor, their unborn daughter Donna, and a 3-year-old boy named Rick, who every day of his life since has worked without ceasing to honor his father’s memory and support the families of our missing fallen from the Korean War. And, Rick, we are honored by your presence with us today.

Or, finally, they could have stories like First Lieutenant Frank Salazar, called up from the Nevada Air National Guard, who volunteered to leave his duty station to serve in Korea. He was shot down on New Year’s Eve 1952, while flying a recon mission over enemy territory.

Lieutenant Salazar’s daughter Diana was just 4 years old when he shipped out from Travis Air Force Base. We met Diana last night at that very same Air Force base — the base where she saw her father depart for the last time. It was the first time that she had been back there. Diana, you honor your father, and all of us, by your presence today as well.

Whosoever emerges from these aircraft today begins a new season of hope for the families of our missing fallen. Hope that those who are lost will yet be found. Hope that after so many years of questions, these families will have closure. And hope that, as President Trump said just yesterday, that these, and those that follow, will, in his words, finally come home to lay to “rest in American soil.”

And so they shall. Some in Arlington National Cemetery. Some in national cemeteries across the land. Some in a churchyard alongside loved ones long gone. And some in a humble family plot by a cornfield on a lonely road.

But wherever they go, these, and all those that will follow, shall be remembered with honor. For as the Bible says, “No greater love has a man than this, that he should lay down his life for his friends.” And as these heroes are laid to rest, so we pray they will rest in peace.

To the families of our fallen, here and looking on, know that our hearts are with you today. We share your hope that someday soon your loved one’s precious remains will be restored to your tender care. And we pledge to you: We will never stop striving until every hero lost in the Korean War is home.

To the veterans of our Korean War, brothers- and sisters-in-arms, thank you for your service. We hope that in this ceremony, in this promise kept, you see once more the deep gratitude that every American feels for your service, and that you’d leave with the absolute assurance that the Korean War is forgotten no more.

And to our honored dead, who gave the last full measure of devotion for their families and our freedom — to these great American heroes, fallen so long ago: Today, as a nation, we breathe a word of thanks for your service and sacrifice. And we say to you, as one people, with one voice: Welcome home.

May God bless the memory of our fallen and their families. May God bless all who have served and serve to this day in the uniform of this great nation. And may God continue to bless the United States of America. (Applause.)