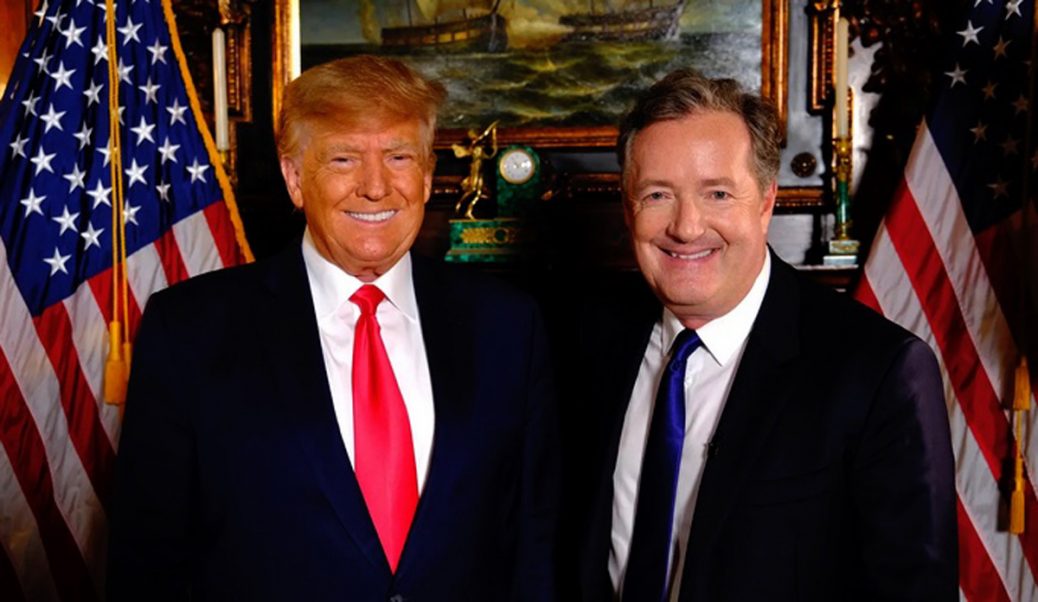 Piers Morgan has been peddling a deceptively edited video that the British broadcaster claims shows Trump storming out of an interview, but Trump just released the full audio proving that Morgan is lying about the whole thing.

The video Morgan pushed out makes it seem as if Trump abruptly cut off his interview with Morgan and walked out without properly ending the visit.

The 30-second clip that Morgan’s team released splashed across tabloids and media outlets, taking the lead spot across the Drudge Report with multiple links accusing Trump of having a “meltdown.” In it, Morgan splices several clips together that make it seem like as on-screen graphics and a deep male voice over says that Trump is a “former president in denial” over the 2020 election. The promo, which calls it “the most explosive interview of the year,” pulls a few short clips of Trump calling Morgan “a fool” and saying “this is very dishonest” and “let’s finish up the interview,” before showing Trump standing up and walking away and saying “turn the camera off.”

But that’s not what happened—not even close. Trump spent more than an hour with Morgan, and the way the promo clip cuts together what it calls “Morgan Versus Trump” moments to promote the interview which will air on this coming Monday night is particularly deceptive. Most of those moments had nothing to do with the election issue at all, and the full audio of the last bit of the interview shows that Trump standing up and walking away and saying “turn the camera off” came after Morgan ended the interview and thanked Trump for a “great interview.”

The audio file obtained by Breitbart News, which is about seven and a half minutes long, begins with Trump spokesman Taylor Budowich interjecting into the middle of the interview to tell Morgan to wrap it up. “We’re an hour in,” Budowich says. “We need to wrap.”

Morgan responds by begging for more time with Trump. “Just a few quick questions and then—” Morgan says. “Thank you,” Budowich responds.

Then the interview goes on for several more minutes. Budowich eventually again tries to wrap it up.

“I haven’t asked about—I wanted to end with your hole-in-one,” Morgan says, then asks Trump to describe his recent hole-in-one when playing alongside golf legend Ernie Els.

Trump agrees and says “go ahead.” Then Morgan asks his question, and Trump answers for more than a minute. After that’s over, Morgan agrees the interview is over and thanks Trump for a “great interview.”

As they’re unhooking their microphones and Trump is getting up to leave, Trump can be heard saying “turn the camera off,” and then a Trump staffer asks to “turn the mics off too,” and Trump says “very dishonest” as the audio file ends.

The full audio file proves that Trump didn’t just end the interview early and walk out on Morgan.

“Piers Morgan, like the rest of the Fake News Media, attempted to unlawfully and deceptively edit his long and tedious interview with me,” Trump said. “He wanted to make it look like I walked out on the interview when my time limit of 20 minutes went over by an hour. The good news is that the interview was taped by us as a means of keeping him honest. The interview was actually very strong on the 2020 Election Fraud, with me calling him ‘a fool’ if he truly believed those results.”

Trump added that the 2020 evidence was “massive and irrefutable,” and pointed to the forthcoming documentary from Dinesh D’Souza based off surveillance footage that True The Vote’s Catherine Engelbrecht obtained on drop boxes in Georgia and other states.

“For those who want to make Piers look bad, compare his video promo and how it was doctored to the real thing,” Trump said. “Hopefully they will now be doing some big changes to their final product. It just shows, however, what I have to deal with in the Fake News Media. He went out of his way to deceptively edit an interview and got caught. That is a big story, isn’t it?”