The Mysteries of Watergate 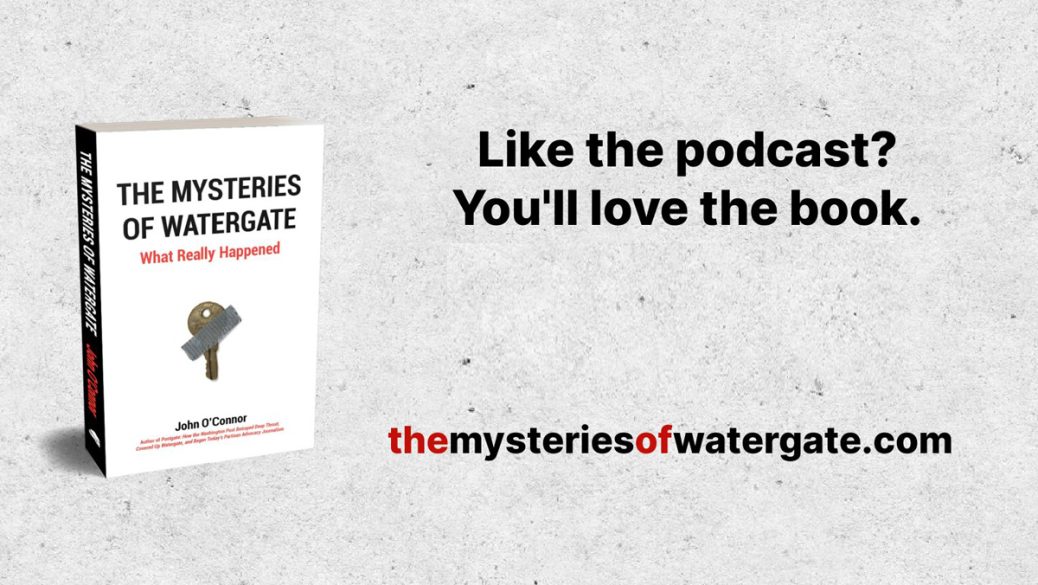 Combine a secret spy agency infiltration of the White House, the wiretapping of call girls, extortion, murder, fraud on the U.S. presidency, a high law enforcement official leaking to the press, a famous muckraker too intimidated to report the facts, and trial evidence barred from public discourse, all contributing to the toppling of a powerful, overwhelmingly reelected president.  Are these elements part of a wild, fictional beach book, or are they components of our country’s most serious political scandal, causing the only removal of a sitting president in American history?

John O’Connor, trial lawyer and once attorney for W. Mark Felt, Watergate’s “Deep Throat,” presents credibly sourced information to spin a tale like none of the hundreds of previous Watergate books and movies.  His book, The Mysteries of Watergate: What Really Happened, is only hampered initially by the reluctance of the critical reader to suspend credulity.  This can’t be true, one is tempted to think, in spite of his steady, even-toned exposition of clearly proven facts and credible circumstantial evidence.  But as this intriguing book works its way through thirty-four well-drawn vignettes, even the skeptical reader cannot resist its pull.

The question asked since 1972 has been: Why would Nixon engage in a risky, valueless operation, when he was far ahead in the polls against a weak opponent?  As O’Connor tells it, Nixon had nothing to do with this caper, nor did his senior aides.  Nixon harbored no illusion that the public might think him criminal, but the idea of being adjudged “stupid” ate away at him.

The book begins with a chapter treating the odd, little-known facts of the burglary and arrests of June 17, 1972.  Each of these largely overlooked tidbits, the book eventually proves, is connected to a deeply revisionist narrative of our country’s most impactful political scandal.

For instance, all the burglars were in the DNC Headquarters at the time of the arrests and could leave both the sixth-floor DNC offices, into the adjoining stairwell and then exit the garage, without the need for tape on the locking mechanisms of those two exit doors.  After all, the tape was needed to enter, not exit.  Watergate burglary supervisor James McCord, an ostensibly retired CIA agent, had assured the other burglars that he had removed the pieces of tape, of concern because they would be a tip-off to security if discovered.

The burglars had set up cameras and opened desk drawers.  But the Washington Post reporting had not explored the location of those drawers, an obvious clue to the true target.  A burglar had tried to rid himself of something in his possession during the burglary, so determined to do so that he engaged in a violent wrestling match with the arresting officer.  But again, this tidbit was left unreported by the Post. Why?

The wiretap monitor had been for the previous two weeks monitoring a phone in the office of one Spencer Oliver, Jr., a minor official not even with the DNC, but with the Association of State Democratic Chairman, a group that would never possess campaign information.  Meanwhile, the participation of PR agency Mullen & Company, full time employer of part-time White House aide and recently “retired” CIA agent Howard Hunt, raised questions about its own participation, when it was learned that a Mullen lawyer had hired a criminal lawyer to represent the burglars.

O’Connor uses the CIA’s own internal documents to show Mullen’s communication with star Washington Post reporter Bob Woodward, and as well with the DNC’s litigating counsel, to keep Mullen’s name out of the scandal.  Why?

What is intriguing about the events described in this book is that at each stage of the scandal, the CIA, Mullen, James McCord, and White House Counsel John Dean, each came close to being found out, narrowly escaping with assistance from the Washington Post – the very same newspaper that was supposedly unearthing the scandal bit by bit.

Howard Hunt, the burglary supervisor and supposedly retired CIA agent, did not wish to take a prison term for the team, and prepared a criminal trial defense that deeply concerned fellow CIA retiree James McCord, as well as agency officials.

In a planned rebuttal to Hunt’s case, Assistant U.S. Attorney Earl Sibert had proposed a case which, like Hunt’s, would involve explosive public revelations.  But eventually, Hunt pleaded guilty on self-interested advice from John Dean. Luckily for the agency, the Court of Appeals suppressed the prosecution’s surprising trial narrative as unnecessary, given Hunt’s plea.

The Mysteries of Watergate unfolds its many facts and characters in an accessible, entertaining story.  Whether the skeptical reader fights the author’s inferences and conclusions or not, this book will forever change the way one thinks about Watergate and the so-called journalism at its core.

For those concerned with today’s one-sided, partisan media narratives, this book is both a necessary, and even frightening, read.

Mark Anthony is a former Silicon Valley Executive with Forrester Research, Inc. (Nasdaq: FORR). Mark is now the host of the nationally syndicated radio called The Patriot and The Preacher Show. Find out more at patriotandpreachershow.com.
Tags: Commentary