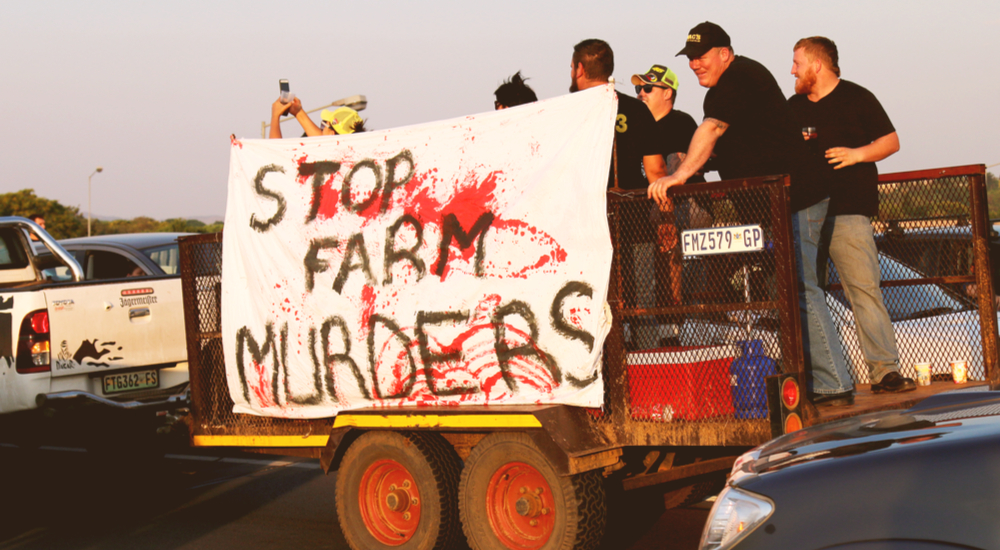 On a morning in April 2000, a Zimbabwean farmer, Martin Olds, mounted a defense of his 12,000-acre holding 400 miles southwest of Harare, after 70 men wielding automatic weapons arrived to lay claim to his land. For two hours, the 43-year-old former Rhodesian soldier used a shotgun and long rifle to fend off the invaders, wounding several while suffering multiple disabling injuries himself. He died there, his body treated indignantly by his murderers—communist thugs motivated by then-President Robert Mugabe

There were no arrests. Olds’ property, like 4,000 other white-owned commercial farms in Zimbabwe, was swarmed by squatters and ultimately seized by the state for redistribution to those loyal to the ruling ZANU-PF party.

But South Africa is on the threshold of an identical plunge, stemming from the push for “expropriation without compensation,” which critics characterize as “Zimbabwe 2.0,” the culmination of a violent post-Apartheid entropy that’s certain to be the lynchpin of failed statehood.

Commercial farming operations number between 30,000 and 40,000, cut in half from 25 years ago. Boers, or Afrikaners, the minority white population, predominate in the agricultural sector, thanks to forbearers who made the arid veldts bloom.

South Africa, unlike the balance of its neighbors—most prominently Zimbabwe, a one-time breadbasket—remains a net exporter of food, and the nation’s estimated 58 million residents are dependent on the farming sector for sustenance. The communist African National Congress, S.A.’s governing party for a quarter century, along with its venomous faction, the Economic Freedom Fighters, are hell-bent on enacting a policy of government-managed thievery in which white-owned land is redistributed to black hands, superficially to right past wrongs.

Taking the private property of those best capable of yielding bounties that feed millions is a prescription not only for a Zimbabwe redux, but a re-visitation of Mao’s Agrarian Reform Law that put China on a path to the Great Famine, or Stalin’s elimination of landed interests—“kulaks”—that instigated genocidal starvation in Ukraine. And don’t forget Venezuela.

Mugabe’s land seizures of the early 2000s amounted to the nationalization of the Ag sector.

The race-based villainy had been on the Marxist-Leninist ZANU-PF’s agenda since the internationally-orchestrated end of Rhodesia and birth of Zimbabwe. As David Wallechinsky observed in his book Tyrants, a decade before the seizures, “Mugabe amended the constitution to allow the government to confiscate land at any price it deemed fair.” Including zero.

Mugabe made a career of marginalizing whites, particularly farmers. Rhodesian President Ian Smith recalled in his autobiography, The Great Betrayal, how during a public meeting with henchmen in 1993, Mugabe referred to farmers as a “greedy bunch of racist usurpers.” He continued his incendiary diatribes to foment popular resentment during the land grabs (“reforms”), calling whites “enemies,” “settlers,” and urging supporters to “strike fear in the heart of the white man.”

The Afrikaner farmers of South Africa, the backbone of the minority “white Africans” there, are on the same precipice that Zimbabwean farmers faced.

Afrikaners’ future was manifest at the incipient stage of ANC rule and the presidency of convicted terrorist Nelson Mandela, who was wedded to a program of land seizures rooted in identity politics and not the least reluctant to join “comrades” in publicly bashing the Boers.

As Ilana Mercer detailed in her book Into the Cannibal’s Pot, during a 1992 party rally, Mandela gave the “black power” salute while members of the ANC’s enforcement arm, the Umkhonto we Sizwe, or “MK,” howled their anthem, declaring “We the members of the Umkhonto have pledged ourselves to kill them—kill the whites.”

Unsurprising that the ensuing years would be fraught with unspeakable crimes against Afrikaners, targeting even children. Farming communities have suffered deeply, with homicides approaching 4,000, according to the campaign Stop Plaasmoorde. Documentarians Jonas Nilsson, Katie Hopkins, and Lauren Southern have laid bare the realities.

Public officials and their acolytes regularly engage in vitriol, airing chants such as “Kill the Boer, Kill the Farmer” and “One Bullet, One Settler.” But given that the S.A. parliament serves as an echo chamber of racially charged rabble-rousing, and the country’s president brands land expropriation in tribal terms, calls for carnage would seem to fit into the lex non scripta of habitually dehumanizing Afrikaners.

Blue-penciling S.A’s constitution will be a cinch. The ANC and its trucklers have the votes to turn Section 25, the land disposition provision, into whatever they like.

Roets told members of parliament on Sept. 6 they were “drunk on ideology,” and their level of intoxication had blinded them to a “failed policy” of land redistribution that would only invite greater failure. Most poverty-choked Bantu want cash, not commodities that require continuous upkeep, he said. One black lawmaker answered with a threat of “war” against white farmers.

Two hundred and thirty-one years ago this month, the U.S. Constitution came to life. The Fifth Amendment protecting property rights was soon enshrined, eventually buttressed by the 14th Amendment. Despite the courts’ interpretational vagaries since Americans have been spared the agonies facing South Africans.

Governmental abuse of power is among the “injuries which nature cannot forgive,” in Thomas Paine’s words. People either flee from it or fight it. Martin Olds stood his ground, alone, till the bitter end. After his, thousands of other farms fell. Zimbabwe is paying a grave price.

President Trump’s directive for the State Department to investigate the train of horrors perpetrated against Afrikaners and the attack on property rights is noble. But Foggy Bottom’s politicization threatens to undermine the process. Ending trade concessions to S.A. under the U.S. African Growth & Opportunity Act and abrogating direct aid would send a message, but they won’t prompt a course change. The Chinese are prepared to backfill the loss of Yankee dollars in S.A.

A well-timed show of force could save lives, avert a humanitarian crisis and spur opponents of liberty to reconsider their options.

The South African government needs a stern reminder that it exists to protect the rights of all citizens equally and must stop afflicting an oppressed, alienated and desperate minority.