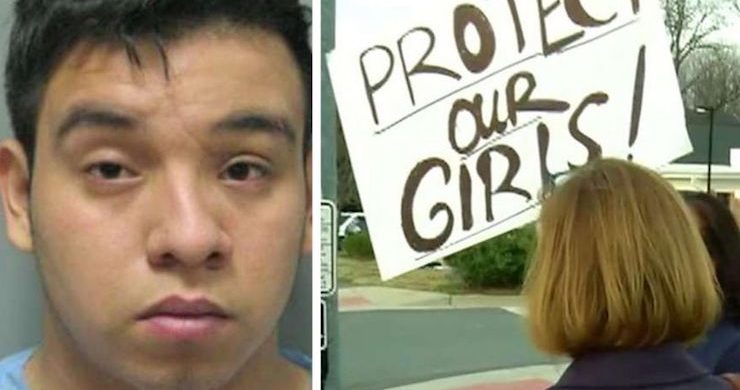 Is it really any surprise to discover that accused child rapist Henry Sanchez-Millian, 18—and his father Adolfo Sanchez-Reyes, 43—are both illegal aliens? Perhaps the state of Maryland—so concerned with family unification of other nation’s citizens on American soil—can arrange a holding cell for father and son to share? After all, that’s the convoluted reasoning behind their sanctuary practice (that actively subverts federal immigration law). Therefore, by their logic, a communal living arrangement behind bars is the most humane thing to do. At any rate, the son has been charged with first-degree rape and two counts of first-degree sexual offenses. If convicted, he faces the penalty of life imprisonment. On the other hand, his father contends with the comparably mild rebuke of deportation. That means separation of the two for the foreseeable future, if not forever. An ironic outcome given what started this mess in the first place.

This situation definitively demonstrates the domino effect of lawlessness. A dreadful chain of events that began with our porous southern border—the choices of a Guatemalan father and son to border jump—and Barack Obama’s eyes closed catch-and-release program that reunified the pair! Speaking of two lawbreakers, Sanchez-Millian’s wingman in that bathroom tryst with a 14-year-old at Rockville High School, is El Salvadorian Jose O. Montano, 17. (Reportedly, he was sent to Maryland to join an uncle.)

Complicating matters is federal law (U.S. Supreme Court decision in Plyler vs. Doe (457 U.S. 202 (1982)) that mandates school age illegals are entitled to a public education same as citizens. For their part, the local school administration enrolled these two wrongdoers—not as a junior and senior respectively—but in ninth grade classes. That’s how this duo of older, Spanish speaking foreigners had access to this much younger female (among many). (The sexual assault occurred on school property at approximately 9 AM on Thursday, March 16.) Specifically, how else would Montano have met her, or been present to push her into that boys’ bathroom? His attorney, David Wooten stated, “This was a consensual act. It was preplanned.” Wooten bolsters his claim by asserting that the victim texted “explicitly compromising images of herself”. Said last week and repeated Monday, Sanchez-Millian’s lawyer Andrew Jezic reiterated, “All parties were willing participants.” If you’re wondering why both narratives so tightly correspond, both men work together at the same firm!

All potential mitigating factors, if legitimate, have yet to be determined. Meanwhile, per Maryland state law the age of consent is technically 17, but persons aged between 14 and 16 may consent to sex given a small age difference of not more than 4 years for the older party. That’s immaterial here as her assailants, near or just beyond maturity, have both been charged as adults. So, Sanchez-Millian and Montano may have gotten away with flouting our immigration laws, but they will likely get no pass for their brutal bathroom misadventures involving gang-raping and sodomizing a fellow ninth-grader.

This egregious circumstance is one of many cautionary tales. How American society is being destroyed within by the wrongheaded embrace of the undocumented under the guise of dogmatic “tolerance” and multiculturalism. The actual problem isn’t America’s systemic discrimination of foreigners. By any measure, what country celebrates diversity, or differences, more fully than us? The wholesale rejection of illegals has nothing to do with their superficial attributes such as ethnicity or country of origin, as pro-illegal proponents laughably insist. Indeed, their knee-jerk demonization of objectors as “racists” are lame attempts at distraction: a subject-changing excuse to justify their bizarre advocacy of naked lawlessness.

In that regard, if our laws are so draconian, why do so many clamor to live here (by any possible means)? Historically, as today, America remains a melting pot with one modern caveat: a person with legal status is warmly welcomed here; one who doesn’t, isn’t. Likewise, would any sensible person open their private residence to cohabitate with total strangers? Is America not the beloved “home” of her legal inhabitants?

In truth, illegal aliens are criminals: an invading underclass of squatters. They’re the ones that don’t respect our laws and customs—not vice versa as their supporters loudly proclaim. Therefore, a wildly chaotic influence is exerted, like acid upon our culture’s social fabric. As important building blocks of that foundation are our public school systems, witness the snowballing uproar caused by this outrage at Maryland’s Rockville High School! The additional revelation that Adolfo Sanchez-Reyes is also undocumented is yet more salt to a whole community’s open wound. After all, it’s obvious Sanchez-Millian’s father acted as a familial magnet, didn’t he? A butterfly effect of what was, what could have been avoided, and what should have been prevented.

From every angle, this specific incident is intolerable. These affiliated troublemakers including Montano and his uncle (whose legal status is unclear) should have been immediately expelled, not permitted to enter and reside within the United States. But, they were and a radiating cascade of escalating crime, loss and disruption is the predictable result. Most tragically, would the unnecessary suffering of a violated 14-year-old child and her aggrieved family—sacrifices upon the altar of politically correct multiculturalism—happened otherwise? Worrying about the fate of foreign lawbreakers while ignoring the rights of victimized citizens explains the topsy-turvy nature of our mixed-up, rather than mixed, society.