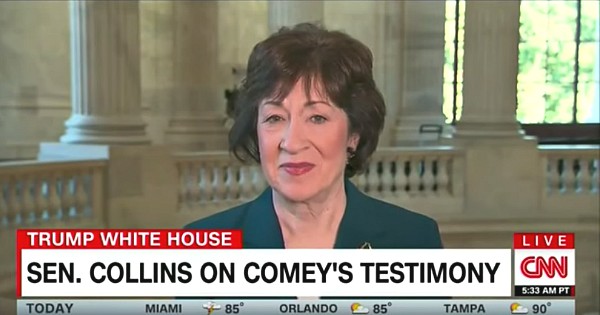 I don’t think you’ll often hear Senator Susan Collins (R-ME) defending the President’s actions, but CNN has become so aggressively “anti-Trump” that even she has been forced to defend the President. It happened during a conversation with CNN’s ultra-liberal morning host, Chris Cuomo, who wanted Collins to attack the President for meeting one-on-one with former FBI Director Comey. However, Collins wasn’t biting, and she reminded Cuomo that Trump has never been guided on protocol for these meetings and that it was Comey’s job to explain that protocol to the President. (A task Comey never even tried to fulfill.) Instead, Collins argued, Comey actually set the precedent by clearing the room and asking for one-on-one time with the President during their very first meeting.

That decision by Comey likely indicated to Trump that this was how such business was supposed to be handled. It’s a reasonable argument from Collins, particularly since Comey never tried to explain differently to the President.

Chris Cuomo: But how could he not know when he asked the A.G. and his son- in-law and others to leave. And when they tried to re-enter, told them to leave so he could talk to Comey? I mean doesn’t that tell you everything you needed to know about whether or not the president was being – acting in ignorance or acting with complete intentionality?

Susan Collins: Not necessarily, and here’s why. The first interaction that the president had with Mr. Comey in early January at Trump Tower, it was the FBI director who cleared the room so that he could have a one- on-one discussion with the president about that salacious dossier. And I wonder if perhaps that made the president think that whenever there’s some sensitive conversation to be had with the FBI director, that it should be one-on-one, because he had two subsequent one-on-one meetings, as well as other phone calls, with the FBI director. That doesn’t make it right, but ironically perhaps the FBI’s actions in that first meeting sent a signal to the president that that is how their interactions should take place.