Regarding the film: All Mine to Give 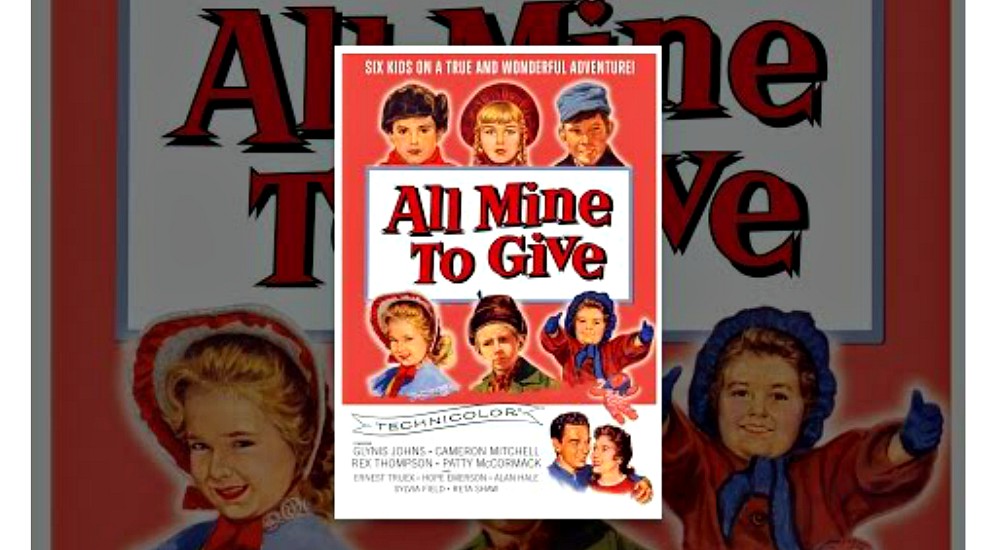 My wife and I have movie nights; her latest choice was: “All Mine to Give”.

As the movie begins, one is informed that the movie is a true story which took place “about 100 years ago”; the movie was filmed in 1957.

Now our copy of the movie is one of four films included in Volume II of holiday classics; my wife was not expecting the story she selected. As the story opens a young boy is pulling a sleigh across a mountainous clearing lined on both sides with trees; it turns out the sleigh is laden with his youngest sister; this scene is near the end of the film, as a segue to the story’s beginning. I’m hesitant to detail the movie – wishing not to ruin the experience of those which may want to view the film – but we can state the movie is heart-warming and poignantly touching going away (i.e., as it comes to close); some of the best of what may motivate human lives is displayed in the movie.

Two of the actors may be recognized Cameron Mitchell (Robert Eunson in the movie; he played “Buck” on the television western High Chaparral) and Alan Hale Jr. (Tom Cullen in the movie; he played the skipper on Gilligan’s Island); the primary actress in the film is Glynis Johns (She plays Mamie Eunson – Robert’s wife) they are joined by a number of lesser known (at least today; back in the 1950s & 60’s many of the actors would have been known…) actors and actresses… The movie script was taken from a 1947 story by Dale Eunson (we guess this to be a great-grandson – perhaps a great-great-grandson – of Robert Eunson)…

As the movie ended I asked my wife her thoughts, and she said the movie was “sad” and she, therefore, didn’t like the movie much, although she said it was a beautiful story…?

In my view, the story – because true – teaches how hardy human beings (in this instance – children, and adults…) at one time were in these United States, and – by induction – the wide-world. Louis L’Amour – famed Western writer – has many stories of youth’s needing to saddle the affairs of an adult; L’Amour – besides living the life of his hero’s – (perhaps it is more apropos to say L’Amour’s hero’s embodied L’Amour’s actual life…) – did extensive research on for his novels, and other writing. And we bring both the story of the Eunson’s and L’Amour’s stories of youth’s in contrast with what today has come to known as the “snowflake.” The imputed meaning of snowflake is an individual who – when placed under a small measure of stress/duress – melts, or becomes emotionally apoplectic; even social-political Leftist professors of English (professor Alan Shoaf – formerly of CUNY,  today he’s @ the University of Florida) lament the fragility of his students; professor Shoaf blamed George W. Bush’s “No-child-left-behind” (Shoaf referred to the program as: “No child left a mind”) a number of years back in a blog-post @ bestthinking.com (bestthinking.com blog terminated operation in January of 2017); we – in a blog response – discussed the cultural changes which more likely precipitated the alteration in many people’s miens; the alterations are not limited not simply to youths… But, we digress…

As it is the movie, besides showing stark contrast with youths, and people today, it also reminds one that Hollywood was always obsessed with showing the worst with which humans are capable, the movie is full of noble souls, and is as my wife described a beautiful, but sad, story; and as one reads the opening lines upon the screen; the story is true.