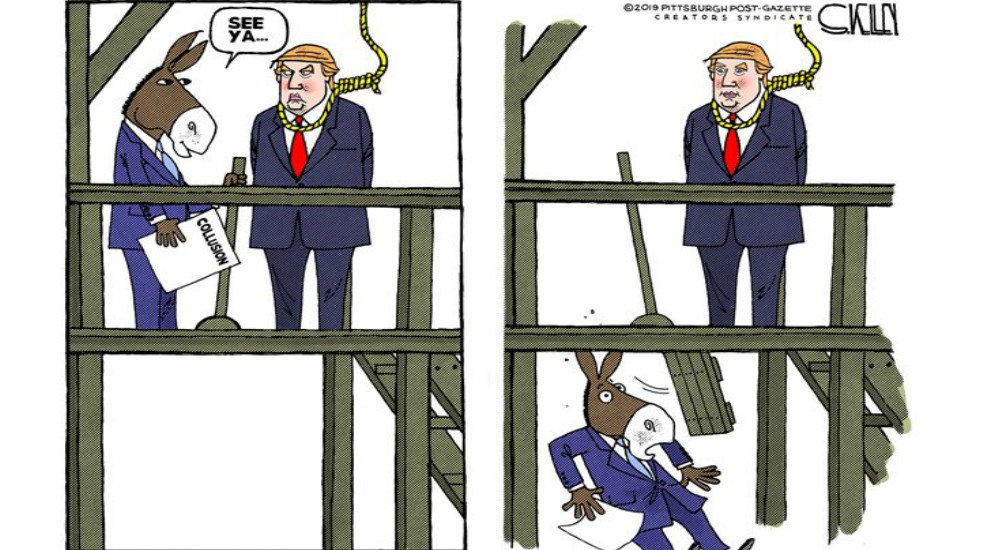 President Trump has announced that he is going to declassify the Mueller investigation as the Democrats can no longer claim that such action would be “obstructing justice.”  As bits and pieces of Mueller’s investigation are declassified, Americans are going to learn more and more that Congress knew full well that the Steele Dossier and the FISA warrants to spy on the Trump campaign were all fraudulent and felonious.

There are Republican members of Congress who threaten President Trump that if he declassifies everything then they would join with Democrats to impeach him to keep themselves from being implicated in the crimes of Obama and Hillary.  Were this to happen then this author and sixty million Americans would fully endorse President Trump in overthrowing those members of Congress and bringing them all to trial.  The left would call it banana republic persecution, but we would know different.

The Republicans of the House Intelligence Committee called on the Democrat chairman, Adam Schiff, to resign his position in the wake of Mueller’s collapsed investigation.  Pencil neck has slandered the Trumps for two years claiming to have proof of Russian collusion.  He defended his position by continuing his slander of the Trump family telling Republicans they “might think it’s okay for Trump to try to get dirt on Hillary from the Russians.”  Considering that Hillary took over a hundred million dollars in donations from Russian oligarchs, that is perfectly acceptable.  That the meeting with Donald Trump, Jr. was a ruse is ignored by the left who only use that meeting as the basis of their lies that it is Trump, rather than Hillary, who is a Russian agent.

The disinformation and lies by the left are compounded by their activist media posing as journalists and the activist law enforcement posing as purveyors of justice.  CNN hired Obama’s CIA director Brennan for his “insider knowledge” of Trump-Russia collusion.  Now he pretends he’s been played for fool.  How does a director of the CIA get taken when he is the head of America’s premier intelligence agency?  His job was to weed out false information and find the truth.  The answer is that he was not working for America but was trying to promote a fiction for the Democrats as being the truth.

Likewise, the dismissal and expungement of charges against Jussie Smollett in Chicago for perpetrating a fake hate crime is another case study of liberal duplicity.  Both the mayor, Obama’s friend Rahm Emmanuel, and the police superintendent have made vehement condemnations of Smollett’s fraud to make people believe they are righteously indignant at his betrayal.  Yet they stood by as Smollett’s record was expunged and made no mention of the true victims of his crime – Republicans.  These facts lend the lie to their phony outrage.

Some Republicans are saying that President Trump should now “move on” from this scandalous affair.  But why should he when Democrats like Schiff are vowing to continue to persecute him and his family?  Trump should not move on to govern since he has been effectively governing very well despite this attempted coup.  What he must do now is turn the tables and investigate the investigators and bring all the Obama regime to justice!  If he does not then the next election cycles will see more and more Democrat voter fraud as they increase provisional ballot fraud and give foreigners, felons, and foolish kids the right to vote in their states to steal the country from educated taxpayers.

It’s Not the Hosts That Create the Drive-By Media Audience, It’s the Fake News