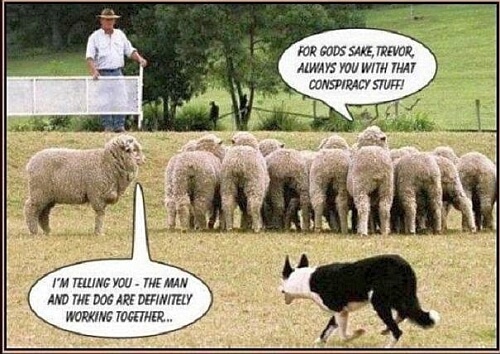 As corruption breaks up and breaks away, it is a noisy process.

Swamp Dwellers are now scared and they are fighting their last dirty street fights in the Deep State.

The Deep State used to owe its allegiance to the global elite rather than to our elected legislators or our elected President, shame on them. The outcome was   an intelligence community which had become a corrupt government answering only to the tich and powerful.

Then Donald Trump was elected and then he elected to keep his promises to the people and everything changed.

The Deep State had been fighting him at every turn.
Big Media sought to undo him. We have turned a corner.

All this has changed with the firing of Andrew McCabe.

It is rumored that McCabe is going to sing and he(we) will take down Comey, Mueller, Rosenstein, the Clinton Cabal, and even possibly Obama.

How will the evil George Soros survive without puppets?

Swamp dwellers have now been put on notice and by their explosive reactions, it seems, the people  they are paying attention.

How do we the people fit into this equation?

For almost a century (especially in the new digital age) big, bad corporations have and are still gaming the system. They win, we lose. We can fix this only by forcing in transparency.

Stealing from the working class of America to pay for an unfair corporate, banking, government or global privilege is WRONG . It is only when our laws enable such bully-thinking that they, too become wrong.

There is much we do not know about the Deep State (Military Industrial Complex & the Intelligence Community) and there is much we still need to find out. Now is the time. There are some questions we should be asking and I suspect we shall find the answers from Andrew McCabe, who sat on the crossroads of the Deep State; all corruption above and below him, passed through him. We suspect he knows it all.

We the people should not tolerate corruption WHEN WE KNOW. Now that we have a chance to pull aside the curtain we need to grab the opportunity.  I think we are about to find out much they don’t want us to know and it will be good for America and the world.

Two things drive change: the ideas of man and new technological breakthroughs. Make America Great Again may not seem to be a new idea; given what has been politically correct to think and say over the last 25 years has been the New World Order. Whether he lasts or not, Donald Trump will be changing “Business as Usual” and “Banking as Usual”, and shaking up the corruption in America.

In living memory there have been three civilizing waves: the Agricultural, the Industrial and now the Digital-Electronic Wave. The changes we now experience are fast and furious and are akin to a gigantic wave that is descending on us.  It is because of this that we need new leaders, men of vision who can help us to see where we are going. It is in times like this that we need a simple formula to sort it all out. There is such a formula and it is this:

EVIL SURVIVES IN SECRECY; CORRUPTION CANNOT THRIVE WHEN THE LIGHT OF DAY IS SHONE ON IT.

It takes men of courage and honesty to stand firm and hold a true course as we let go of the old corrupt order. It is such men of courage that we need to seek out and support in this next 2018 & 2020 elections.

Imagine a powerful sea, with large waves breaking. The force of each new wave is met by the force of the prior wave receding. At the place where the two waves meet, their force is broken into a thousand swirling eddies. Is this not what our society is experiencing right now?

It is not the first time two powerful civilizing waves have met and wreaked havoc on society. It was the force of the Industrial Revolution that undid the old agricultural order of Kings and the Aristocrats. The difference was that in those days it was easy to see unfair advantage and inevitable that justice and fair play would eventually overcome. The world was smaller but even then the changes brought by the new industrial wave fighting entrenched corrupt agricultural order wreaked havoc on the world. The French Revolution was ugly.

As the Industrial wave now meets the Digital Wave, the Digital Revolution has taken us global.

Now the conflict is both bigger and more subtle. This is because in the industrial order it is easy for bad men to hide because of the split between the consumer and the producer. Those taking advantage have learned to steal from both producer and consumer and they have perfected the art of hiding in the middle.  When men do not act to serve the greatest good, their activities MUST be conducted in SECRECY.

Those who have bad secrets are running scared and we can know them by their efforts to hide their acts and to curb transparency.

As the corrupt industrial and financial model crumbles, it is actually possible to create a better culture, maybe even a golden age. This may be hard to see as the water swirls around us and the banking and corporate and military and political powers fight to maintain an income inequality that will upend our culture.

To come through this and retain some liberty, we are going to have to have a willingness to refresh our lives, to let go of the old and to embrace the new.  This is the decision that each voter faces in 2018 & 2020.

First and foremost we MUST get the Internet back under American control, and subject to constitutional protections.  It is our constitution that protects America.

Sadly the Industrial Order could well be replaced by something far worse than what we now have, the signs of decline are already out there. We see the diabolic ideas of Saul Allinsky manifesting in America; having been secretly introduced by Soros, Obama & HRC to usurp our traditions of freedom.
Marxism got a hold in the last eight years.

What we are doing is riding the digital wave on the cusp, and it is almost ready to tip over.  We can ride and command this new electronic wave, keep it free and use it to create a far better system – or we can let it crash and engulf us. We can fail to take action, fail to elect the right new leaders and we can let the electronics that drives this new wave be used by the entrenched establishment to undo our working system of government in the USA and replace it with a global governance driven by ugly secrets and dark money.

How do we fight back?

It all begins and ends with a STRONG AND COLLECTIVE demand for TRANSPARENCY.

Keep up the demand for transparency.. Don’t let them EVER bury their dirty secrets again.

The Intelligence Community HAS TO BE ACCOUNTABLE TO THE PEOPLE.

They cannot hide behind secrecy or “political corruption” posing as classified data. We need to pull this FISA COURT SYSTEM into the open.

I ask you; think on this, WHY DO WE NEED A PARALLEL SYSTEM OF JUSTICE? Our founders gave us a fine system WHICH INCLUDED CHECKS AND BALANCES. By secretly changing the rules we know Presidents 43 & 44 were trying TO BREAK THE RULES. We police corruption by bringing their secrecy out into the open.

Quote for the Week

“Truth never damages a cause that is just”