Back in June of 2015, despite a GOP field of 16 other presidential candidates who were arguably the most talented overall in history, the billionaire businessman, showman and political novice Donald Trump used his formidable name recognition, celebrity and a handful of populist slogans and taglines straight out of the advertising and marketing playbook to work a modest plurality of angry and frustrated Republican primary voters into a frenzy. Able to win many primaries and become the presumptive G.O.P. Presidential nominee with pluralities of 35 to 40 percent in most cases because the vote was split among so many candidates, Mr. Trump’s nomination will, in this writer’s view, be largely a fluke.

Fluke not withstanding, Mr. Trump’s populist-driven popularity is real, and clearly understandable. Acting like part P.T. Barnum (you ain’t seen nothin’ yet) and part pro wrestling or mixed-martial arts promoter, Donald Trump put on his showman’s hat, put on a show, and made his audience believe the next show or act would be more sensational than the last. Tens of millions of Americans heard bold and thunderous declarations: “illegal immigration will be stopped!”; illegals will be rounded up, shipped home, and a wall will be built at Mexico’s expense!”; “terrorism will be stopped, because we will temporarily ban all Muslim immigration!”; “our leaders in Washington are stupid, have made stupid deals with nations like Iran and China, and I will negotiate deals favorable to America that will bring back millions of jobs”; “our foreign policy is a joke! we must stop the endless little wars, and make our allies pay their fair share for their own national defense!”; “we’re going to ‘Make America Great Again’!”.

Much in the style of encouraging raucous laughter at P.T. Barnum’s circus by pointing at ugly clowns or poking fun at bearded ladies or two-headed animals, Mr. Trump succeeded in using personal insults, name-calling and cheap shots against opponents, the media, and virtually anyone he disliked or disagreed with, to stoke his supporters loyalty through a strong emotional pitch alongside a dangerously weak intellectual appeal. This writer, like millions of those who supported and voted for Donald Trump, found gut-level satisfaction in the short list of policy-related positions he has commented upon or voiced his intent. Like countless other conservatives, I desperately want an end to illegal immigration, and the illegals all sent back where they came from. Of course I am sick and tired of the corruption, the

“Establishment, Do-Nothing RINOs” and weak, feckless leadership in Congress. I am very angry at Barack Obama and his administration, whom I view as wicked and America-hating, but even angrier at the G.O.P. majorities in both houses of Congress who have scarcely lifted a finger to keep their hollow promises of November, 2014 to stop Obama in his evil tracks. 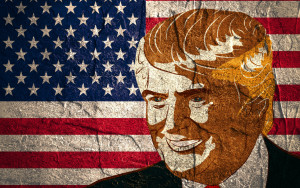 Mr. Trump has succeeded in getting my attention, and that of millions of others, by tapping into that unprecedented anger, frustration and division that is understandably rampant across America. Mr. Trump has also won the votes of many millions, who, much like the “honeymoon passions of new love”, allowed their political romance with the bluster and boldness of Donald Trump to blind them to his many shortcomings, his unseemly words and conduct, a past record in stark contrast to true constitutional conservative values and ideals, and his questionable fitness to lead as President based upon his tempermant, abrasive personality, and, assuming Mr. Trump possesses a moral center, it is unstable and unreliable at best.

Millions of patriotic Americans who are also Constitutional Conservatives, and many who also are Evangelical Christians, hoped and dreamed for a Republican nominee who would upon election, quickly and boldly strive to undo the horrific damage and evils inflicted upon our nation by Barack Obama and his administration over the past eight years. These Constitutional Conservative Patriots, and these Evangelical Christians, longed for the opportunity in November to cast their votes for a Conservative Republican whose platform of ideas, values, policies and programs is comprehensive and a clear alternative to destructive autocrats like Barack Obama and Hillary Clinton, who are hell-bent on turning this nation into a anti-Christian, secular, socialist dictatorship.

Mr. Trump, while many of these conservative voters might hold their noses and vote for your come November for the sole purpose of keeping the “wicked witch of the east” out of our White House, we need you to tell us much more. Millions of conservatives are currently stressed out and prayerfully searching their consciences and seeking Divine help from the Lord Himself, whether to vote for you out of pure civic duty to deny Hillary Clinton the Presidency, to vote for a third party conservative, or elect to stay home on November 8 and leave this election in God’s hands.

Mr. Trump, tell us more! Please tell us you will cease to brag about your infidelities, your multiple marriages, and that you have never asked forgiveness for anything. Please tell us more, about how you see the error and the wrong in using obscene language, at public rallies of all places, engaging in petty put downs, insults and needless vulgarities.
Instead, admit your shortcomings, and tell us what you plan to do to finish growing up. You behave more like a teenage boy than a mature man who wants Americans to trust you as President of these United States. Tell us how you will preserve, protect and defend the Constitution of the United States; indeed, promise Americans that you will return America to its Constitutional Conservative principles, and work immediately to reverse the eight year reign of terror of Barack Hussein Obama. Mr. Trump, tell us more! Promise Americans, that you indeed will preserve, protect and defend the Constitution of the United States, against all enemies, foreign and domestic. Millions of conservative Americans need you to tell us you will change your ways, adopting behavior and speech becoming of the dignity of the office you seek.

Tell us you understand that leadership requires humility and a clear moral vision, not boasting and bombast. Mr. Trump, we simply cannot accept Hillary Clinton as President, and we seek a rationale that permits us in good conscience to vote for you. Mr. Trump, tell us more.