The Midnight Ride of King Barack 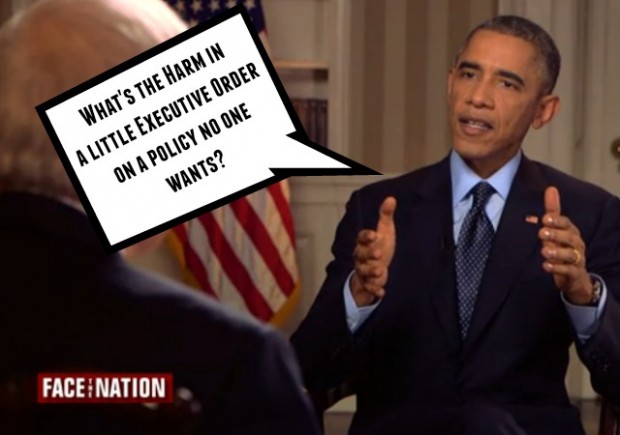 Now that Donald Trump has vanquished Hillary and the Republicans maintain control of the House and Senate, reports are that Obama is set to ram through 98 additional Executive actions and regulations, also known as “Midnight Actions,” before leaving office. I’m shocked…that it’s only 98.

“Federal agencies are rushing out a final volley of executive actions in the last two months of Barack Obama’s presidency, despite warnings from Republicans in Congress and the reality that Donald Trump will have the power to erase much of their handiwork after Jan. 20,” reports the Politico.

Just some of the 98 are restrictions on “Big Oil” air pollution, fracking, more unwanted and unneeded federal oversight of online colleges, more Obamacare rules,cell phone bans on planes and of course, guaranteed funding of Planned Parenthood. This is in addition to the 235 Executive orders Obama has already signed.

So why is Obama doing this? Trump has already vowed to immediately “cancel immediately all illegal and overreaching executive orders,” and do it on day one.

Well, I’m guessing that Obama must not believe that Trump will do it – that when it comes down to it, he will act like every politician which came before him and capitulate, at least on some.

But this is not what his supporters and even folks like me expect. Speaking for myself, I want Trump to vacate every single one of

the 235, plus whatever “midnight” orders Obama’s cares to sign. This is one thing president Trump can do without consultation or consent of Congress. In addition, Trump should then hire someone he trusts to begin to review every Executive order/action written by every past president. He should charge this individual to bring to him a minimum of a dozen or so orders every week to be vacated. I can dream, can’t I?

But what about regulations? The radical head of the EPA, for example, has put the pedal to the metal, in order to roll out as many as they can prior to leaving. “As I’ve mentioned to you before, we’re running — not walking — through the finish line of President Obama’s presidency,” Environmental Protection Agency Administrator Gina McCarthy wrote agency employees the day after the Nov. 8 election. “Thank you for taking that run with me. I’m looking forward to all the progress that still lies ahead.”

Trump alone hasn’t the authority to vacate these. He will need help from Congress. It appears they are taking this seriously, as House Majority Leader, Kevin McCarthy, along with every House committee chairman cautioned the agencies “against finalizing pending rules or regulations in the Administration’s last days.”

If the agencies, like the EPA, choose to ignore the Congressional warning, which they will, Congress can then invoke the 1996 “Congressional Review Act,” which states that they may repeal any rule or regulation written after May 30, 2016, by simple majority. After that, the Politico explains that, “agencies will be forbidden to enact any regulation that is ‘substantially the same.’”

Time will tell. We can only wait and see if Trump, and more so Congress, follows through with the promises to vacate Obama’s actions and industry-killing regulations.

Once thing is for certain. Obama and his cronies will keep their feet on the gas up until, and probably even while Trump is taking the oath of office.