Dismantling the Marxist Dept. of Education Will Start to Make America Great Again! 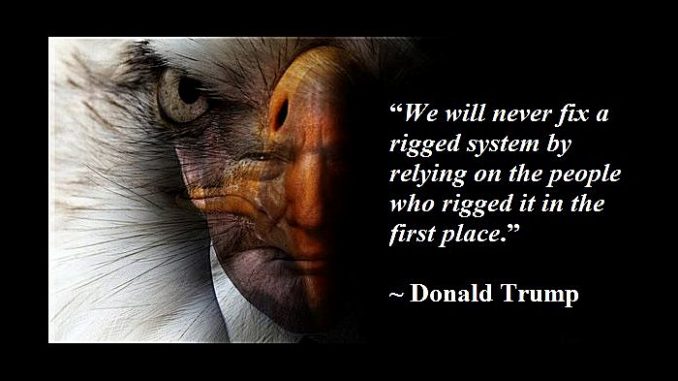 Marxism needs evolution to survive. Without the false premise of evolution, Marxism falls apart. In the final analysis, it is readily seen evolution is taught not for its scientific benefit and edification, but to keep the Marxist swamp strongly in place.

It is the globalist foundations profiteering from Marxism, which keep evolution alive and well funded through grants and scholarships. A powerful vested interest exists in doing this. PBS is complicit as the globalist propaganda conduit, funded by Soros.

In addition to perennial propaganda programs, PBS “teaches” Evolution: A Journey Into Where We’re From and Where We’re Going. It is important for President Trump to act on PBS. While CNN, MSNBC, ABC, Fox News, The New York Times and The Washington Post overtly and chronically betrayed him, globalist-funded PBS is betraying the nation!

For a full and complete restorative agenda of “Americanism not Globalism,” all Marxist evolution feeding the animals in the swamp must be drained! The illegal and anti-Constitutional Dept. of Ed. must be dismantled, evolution must cease to be taught as fact, and full reparations and restorations must be given to true scientists, demeaned and exiled from public universities, for challenging the lie of evolution.

This will Make America Great Again!

In a touch of historical irony, we see some of the greatest conquests – of creationism over the lies of evolution – were from brilliant Christian naturalists, when evolution was a “new theory.” They easily refuted with solid Christian conviction and scientific insight the following:

1. Evolution admits there are no facts – not even a single fact – directly proving the doctrine. We have no experience of one species being transmuted into another. We do not see it taking place before our eyes. There is no trace of it in the historical ages.

2. Darwinism is at best an hypothesis. Hypothess are introduced in science to explain facts. They are to be propounded under very stringent restrictions. They are to be admitted only when they explain the facts. There must be no facts inconsistent with them.

3. Darwinism does not account for the whole of the facts. It can offer no explanation of the origin of the matter out of which animated beings are formed. Darwin is obliged to postulate three or four germs, or at least one germ, created by God. The admission is candid, and shows that in the last resort we have to call in something higher than evolution – in short, we have to call in God.

4. Darwin’s idea of “gemmules” has no proof and is merely a hypothesis brought in to support a hypothesis. As a hypothesis must be suited to the facts, we also see wide gaps in evolutionary “succession.”

5. No argument drawn from changes produced by domestication can admit of a legitimate explanatory application to cases in which everything must be done by unaided natural agency. By artificial means man may produce changes which would never take place spontaneously. It is then urged and cannot be contradicted that domestication has never produced a new species, either plant or animal. The supposed new species thus originated have, when carefully investigated, turned out to be new varieties.

6. The crossing of the horse and ass gives a very useful animal, the mule. But mules do not propagate their kind, and so cannot give us a new race.

7. There is such a thing as fixed orders, genera and species both in the animal and vegetable kingdoms. There are fixed species in the mineral kingdom, such as the sixty-four elementary bodies. No one has been able to transmute metals into each other, say to transmute iron into gold. These fixed types give us the unity amid the variety, the stability amidst the mutability, by which our God-created world is characterized.

Needless to say, there are many more facts illustrating the folly of Darwinian evolution. And yet globalist-funded PBS calls evolution “A Journey Into Where We’re From and Where We’re Going.” More lies! Lies, lies, and more lies, for which innocent students take out student loans and which gruelingly take years to pay back.

The removal of Darwin’s evolution – which Marxist globalism needs to survive – is the pulling of the plug in the swamp to be drained. Let apologies and restoration be abundant for humiliated and exiled Creationist scientists! Make America great again and welcome the Creation scientists to teach in full measure and truth!

That the known effects in the world – the order, beauty and beneficence – point to the nature and character of their cause; and this is not an unknown God, as Herbert Spencer maintained, but a known God. “The invisible things of God from the creation of the world are clearly seen, being understood from the things that are made, even his eternal power and Godhead.”

Why do the anti-Christian globalists, including Soros, fund the lie of evolution?  In 1858 Darwin published his work, “Origin of Species by Means of Natural Selection, or The Preservation of Favored Races in the Struggle for Life.”  The title indicates the nature of the process, natural selection, by which species are supposed to be regenerated.  (The truth is that there is no proof, ever, of one species being transmuted into another.  But Soros believes this very lie he funds!)

It says certain individuals, by exertion or otherwise (with Soros, it is his draconian agenda with fiat currency) get a peculiarity which suits them better to their position.  These survive, while others perish.  The Marxist evolutionist-funding Soros (remember there are no absolutes in Marxism, so it is acceptable and expedient to lie, while funding the perishing of American nationalism) thinks himself one of the favored globalist race.  But President Trump assures this will very soon change!