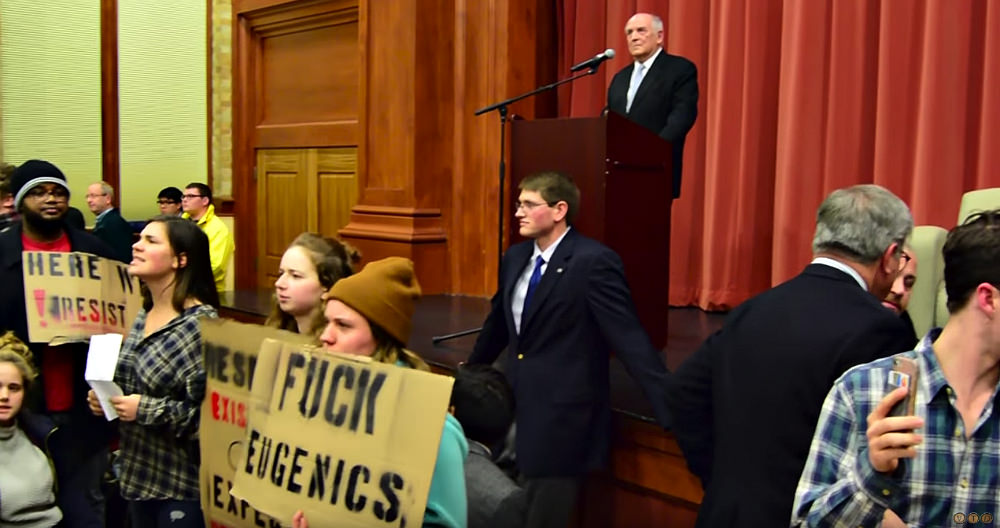 In what is an increasingly common scenario, PC hysterics at Middlebury College recently managed to shout down a conservative speaker who had been duly invited to speak on campus. This time it wasn’t even the deliberately provocative Milo Yiannopoulos whose presence recently incited a riot at Berkley.

It was the staid and gentlemanly Charles Murray, whose major thought-crime seems to have been writing a book that contained wrongthink twenty years ago. Murray is a scholar at the American Enterprise Institute (AEI) and was invited to Middlebury to address a student group affiliated with AEI.

Besides affirming the absurdity of what passes for the left these days on many college campuses, there is an important object lesson to be learned here. Charles Murray was very outspoken in his opposition to Donald Trump during the campaign, a fact which caused a great deal of consternation among many of Murray’s usual fans who expected more sympathy for Trump from him. They saw Murray as someone who should personally understand the irrational and dangerous nature of the rightthink enforcers and felt Murray’s opposition to Trump, which was more about demeanor and decorum than policy, was amplifying the narrative of the enemy.

While I don’t doubt that some of Murray’s concerns about Trump were sincere, I still thought I detected some posturing on his part. Even though he demonstrated that he understood the dynamic Trump was capitalizing on in a very insightful article he wrote for the Wall Street Journal, his vocal opposition to Trump struck me as at least partially motivated by his desire to signal his status as a serious thinker. An AEI scholar couldn’t be supportive of an uncouth demagogue like Trump even if he was identifying real grievances in a way none of the other contenders were. I commented on this dynamic at the time in an article called “What is Behind Murray vs. Trump?”

I don’t have a problem with people expressing concerns about Trump. I have my own especially on foreign policy where I don’t think he is America first enough, but given the highly charged environment that we currently find ourselves in, criticism of Trump from the right needs to be careful and nuanced so that it doesn’t just amplify the PC brigade’s narrative and contribute to the pile on. The PC Bund is never going to be satisfied with us tossing them a bone by condemning Trump’s “grab ’em by the …” comment or whatever. The PC enforcers demand total assent or else you’re a Nazi. It cannot be appeased with half-measures.

This incident at Middlebury College is a perfect illustration of this. Among other foolishness, the disrupters chanted, “Racist, sexist, anti-gay, Charles Murray, go away.” What? Murray has been accused of wrongthink on race because of his book The Bell Curve. What has the man ever said of any notoriety about women or homosexuality? But that doesn’t matter to the PC hysterics. If you’re not 100% PC, then in their addled minds you’re a 100% wronkthinker and every category of wrongthink can be attributed to you.

How much good did all Murray’s posturing against Trump do him with the brain dead PC robots who shouted him down on campus because he is an identified wrongthinker? They didn’t care that he was harshly critical of Trump. It gained him no credit with them at all. They just wanted another wrongthink scalp. This is the object lesson this episode should teach us. The PC Beast will not be satisfied with anything less than total capitulation.

Dan E. Phillips writes from a paleoconservative perspective. His work has appeared at many sites on the internet including Lew Rockwell, OpEd News, Intellectual Conservative, and The Economic Populist.

McCloskey Gets Last Laugh: Posts Pics Of New Gun After Being Forced To Surrender Old One
June 21st, 2021 The Lid

Major US Cities Race To “Re-Fund The Police” As Utter Lawlessness Reigns From Coast To Coast
June 21st, 2021 Sons of Liberty Media

DEAR COVIDictators: Will ‘You Believe The Science’ Of A Guy Who Outclasses YOUR Experts … Or Nah? (VIDEO)
June 21st, 2021 Clash Daily