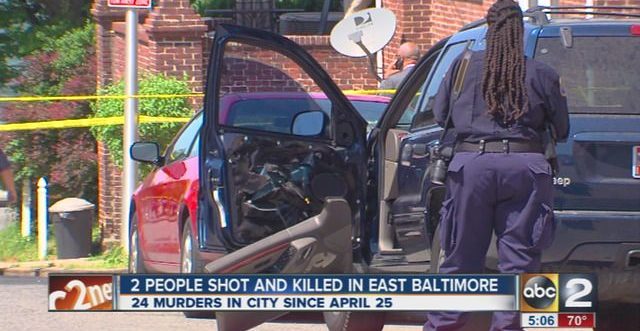 I love conversations with my 89-year-old black preacher dad. We chat over the phone. I live in Florida and Dad lives in the Baltimore area of Maryland. Blacks are killing each other in record numbers in Baltimore. http://cbsloc.al/2kGZCsM Dad said a young black male crazy from taking a new street drug held two elementary school kids hostage with a knife. Police tried to talk the man into letting the children go. Unfortunately, SWAT was called and they had to shoot him. He died.

We chatted a bit about how the police were in a no-win situation, branded racist whatever they did. Some said SWAT shot too quickly. Had the drug-crazed man stabbed the kids, SWAT would be criticized for acting too slowly.

The incident inspired a young black man from Pumphrey, Maryland, the community I grew up in, to plan a prayer vigil. He asked my dad to come and speak. The young man agreed to pick up Dad because he no longer drives. Dad will be 90 in April.

The prayer vigil was scheduled to be outside the Pumphrey Community Center because the young man who planned the event could not afford to rent the facility. When the custodian who was inside the center cleaning realized Rev Marcus was outside, she opened the doors.

Dad shared with his audience a story from when I was around 9 or 10 years old. I remember the incident well.

A neighbor, Miss Frances cautioned dad not to go swimming in the huge body of water a few blocks from our home. She said it was deep with dangerous currents. Dad blew her off as a frightened old woman. Dad said, “You swim on top of the water so it does not matter how deep it is.”

After church one Sunday in August, Dad and I could not wait to go swimming at what we called “The River.” When we arrived, a crowd from the city was there swimming. Not 10 feet from the shore, a boy went under the water and did not come back up.

Dad and a couple of men dove in, looking for him. The pressure was hurting dad’s ears as he felt around for the boy in the dark cold water. Dad dove two times staying down as long as he could. Dad said just as he was about to dive for the third time, I said, “Dad don’t go back down there.” He obeyed my request.

It took the fire department three hours dragging the bottom before they hooked the boy’s body. Dad said his point in telling the story was somebody had to die before he listened to Miss Frances.

Dad said, “Somebody had to die to bring us here today.” He went on to speak about issues plaguing the black community. Knowing my dad, I’m sure he talked about the importance of having a personal relationship with Jesus Christ.

Dad said after he spoke a man came forward and put a 20 dollar bill on the table. Spontaneously, the crowd followed his lead. The young prayer vigil organizer was blown away by the crowds’ generosity. He had more than a enough money to cover the rental fee of the center. Group consensus was to donate the rest to a needy family.

I told dad that sounds like the Bible story when Jesus fed the five thousand. Matthew 14:20 “…and there were twelve baskets left over.”