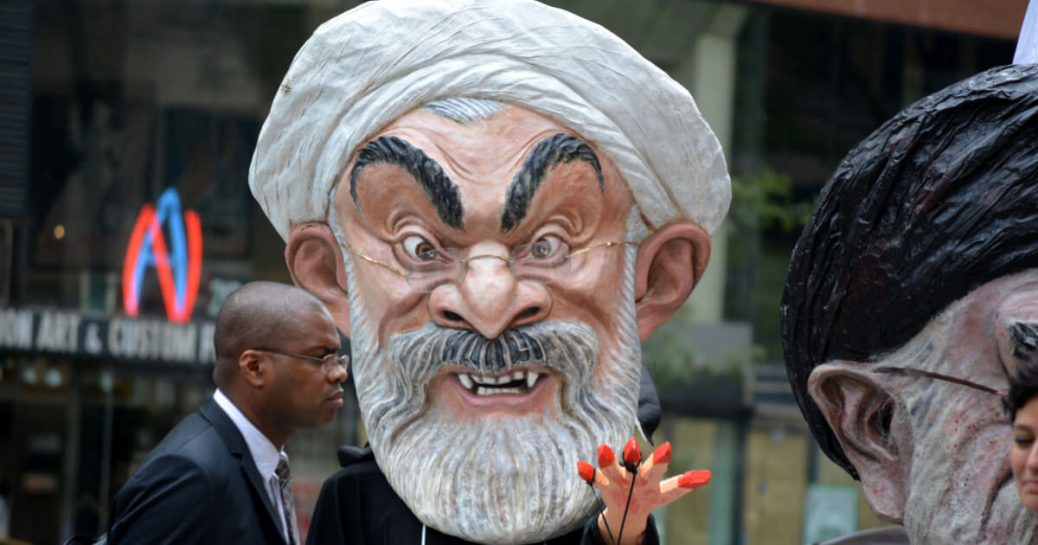 Editorial credit: Christopher Penler / Shutterstock.com
Avoiding a U.S. military strike by a mere ten minutes recently, Iran has long danced across the razor’s edge and pushed the limits with America, from the first days of the Ayatollah’s revolution to the present, and despite anything to the contrary portrayed by the anti-American Communists and Democrats in our country, no one is to blame for Iran’s current sorry state of affairs, other than Iran’s mullahs and the rogue regime they head, a regime that should have been eradicated long before America ever had to enter Afghanistan.
Since May 12th and the Iranian attacks on four oil tankers in the Gulf of Oman, close to the port city of Fujairah, the world has witnessed Iran also use mines to attack two other oil tankers on June 13th, the Kokuka Courageous, and the Front Altair, while on that same day, according to CENTCOM, they attempted to shoot down a U.S. MQ-9 drone with an SA-7 surface-to-air missile. And now, on June 20th, Iran shot down a $187 million dollar unmanned MQ-4C Triton drone, the Navy’s version of the RQ-4A Global Hawk, over the Straits of Hormuz, the international waterway so vital for the world’s commerce and economy and the transport of oil and food.
This is Iran’s answer to President Donald Trump’s sanctions, and although they are hurting Iran’s economy and creating a steep rise in inflation and the ability to purchase much needed everyday items, they are not really affecting the Mullah’s policies, nor will they. President Trump and the free world seem to forget that this is the same regime that sent unarmed children into machine-gun fire against Saddam Hussein during that prolonged war, 2003 to 2011, once their armaments ran short, rather than surrender or admit defeat.
Let’s not forget that the Ayatollah Ruhollah Khomeini and his Revolutionary Guard took our U.S. Embassy in 1979 and held fifty-two Americans hostage for 444 days; don’t forget that from that day forth, Iran has been the number one exporter of terrorism across the globe, as its terrorist acts still persist today, in the here and now, and through its Revolutionary Guard and Hezbollah, it has taken Lebanon, while it tries to take Iraq, Syria, Afghanistan and Yemen.
Let’s also not forget that Iran is responsible for the bombing of the U.S. Marine Barracks and 241 dead Marines in 1983, through its Hezbollah proxy, the U.S. Embassy bombing in Beirut and 17 dead Americans, the 1996 Khobar Towers bombing and 19 dead Americans, not to mention disappearing U.S. citizens like Bob Levinson in 2007 and plotting to assassinate the Saudi Ambassador to the United States at a Washington, D.C. restaurant.
President Trump will make a terrible miscalculation for the country’s future, if he is holding back out of fear that any retaliation may be seen as “unpopular” and cost him the election, because that is just what Iran is hoping he will do. For forty years they’ve subverted U.S. policy in the Middle East, killed hundreds of American soldiers and always waited for the more malleable Leftist Democrats to take the Oval Office, so they could continue on, business as usual.
On December 2nd 2013, I wrote something that is even more true today: Does anyone really believe that Iran will ever stop attacking the U.S. and Israel and their interests across the globe, as long as the mullahs, Ayatollah Ali Khamenei, and Islam — the Mother of All Totalitarian Theocracies — keep Iran in a stranglehold?
Many so called experts say we can afford to wait, until Iran collapses under the weight of sanctions, or the people rise up an overthrow the Mullahs. This is unlikely to happen soon, since the Revolutionary Guard has infiltrated all sectors of Iran’s society and murder dissenters at the slightest provocation. The Mullahs are far too willing to sacrifice Iranians so long as they can stay in power and continue with their agenda to create a greater Iranian influence and control of most of the Middle East, especially Shia areas.
Do we wait at the expense of thousands of more deaths, in order not to alienate a certain “friendly” segment within Iran, or do we act and end the threat for all time, freeing those “friendlies” from their Islamic masters in the hopes they will understand?
Iran’s President Hassan Rouhani recently warned: “We have always guaranteed the security of this strait. Do not play with the lion’s tail. You will regret it forever.”
And in the meantime, Iran continues at a furious pace to improve its nuclear weapons program. Some experts, such as James Woolsey [former Director of the CIA], William Graham [Pres. Reagan’s NASA administrator] and Fritz Ermarth [Special Assistant to the President under Reagan and former CIA], suggest that Iran already has nuclear weapons and that America should not be too hasty to enter a war with a regime that may not hesitate to use them if threatened with a final defeat. They add that any retaliatory bombing would only start a war that would be far more difficult than anything seen in Afghanistan and Iraq.

I don’t think Iran has a fully functional nuclear weapon yet, or at least not one that they are able to deliver to the United States. If they did, I believe they would have already found a way to strike the U.S. — the Great Satan — by giving it to a terrorist and being able to deny any knowledge of it in the aftermath of the radioactive fallout.

Whatever America does, at some point in the future, Iran will not hesitate whenever they decide to deliver a murderous strike on our shores. No one should forget that former Iranian President Ahmadinejad once warned that some 70,000 Revolutionary Guard were living in the U.S. as sleeper agents prepared to do their worse, ready to conduct widespread terror if ever called upon by him or the Ayatollah. The unfolding chaos would be worth the risk, as it would smoke these domestic enemies from hiding, with their deaths being the final results and hopefully with few of our own dying.

Make no mistake. The Iranian attack on our drone was no “mistake” as Trump hopefully mused.
Shortly after the Triton drone was downed, President Trump tweeted: “We were cocked & loaded to retaliate … I asked, how many people will die. 150 people, sir, was the answer … 10 minutes before the strike I stopped it, not proportionate to shooting down an unmanned drone.”
America recently learned a retaliatory attack was in the works, over the drone downing, and it was focused on specific targets linked to Iran’s nuclear facilities. As such, those potential 150 potential casualties that prompted President Trump to back off of any retaliation were military personnel, for the most part. Iran has never had any compunction over inflicting U.S. casualties, and it never will.
No, we don’t need to rush to war, but I wouldn’t call accepting forty years of murders of Americans and destruction of American property a “rush”. America’s waste of time in this situation only assures us that whenever the time does arrive that we must deal with Iran militarily, it will be infinitely harder than it should have been, especially with Russia and China currently helping them circumvent sanctions.
On June 20th, Senator Lindsey Graham told reporters on Capitol Hill: “Here’s what Iran needs to get ready for: Severe pain inside their country”, adding his warning that if Tehran is “itching for a fight, they’re going to get one.”
Senator Graham also suggested the U.S. is “a lot closer today [to military conflict] than we were yesterday, and God only knows what tomorrow brings.” He also suggested the likelihood of a U.S. intervention in the region increases greatly if Israel launches its own campaign against Iran.
Rather than allow them to acquire viable nukes and missiles with enough range to hit America, or to be smuggled into a U.S. city by a proxy, the United States should mount a sustained bombing campaign, similar to the one used against Hanoi, that hits every nuclear facility and every government building and military installation, sooner rather than later, and without any “boots on the ground” or invasion; let the Iranians pick up the pieces as they will. And although a good many civilians might die too, most of the casualties will be those deserving of death.
America must gather up the democratic courage, the intellectual honesty and the willingness to act, or the consequences that so many are afraid of now will pale in comparison later. America must soon act to stop any and all threats from Iran, or the world that evolves ten years down the road will be infinitely more dangerous and deadly than the one we have today.