Judge Roy Moore for US Senate 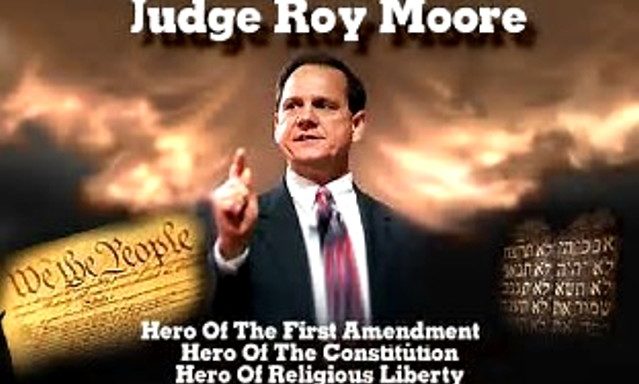 I want to endorse Judge Roy Moore for the US Senate for a list of reasons on both sides of his teenage dating at the age of 30.  Yes, it is strange, but apparently Judge Moore gave up the practice soon after he started as he married a lady his age, and had children with her, built a family and a career in the law and public service.

We have not read that he mistreated any of the girls he dated.  They were all over the age of consent, did not report being attacked in any way and the practice stopped after a short time. Judge Moore has lead an exemplary life since then without Freudian therapists, rehab resorts or spas for 40 years!  Is that not long enough!  No treatment scheme has that good a record.  Zero recidivism?  No wonder the Democrats cannot understand.  It is a case of the judge healing himself!

And, what is this business of taking anyone’s decades old testimony and ruining a man’s life with it unchallenged?  Have we tossed the Constitution for the plaintiff wailing of pretty faces?  Accusation is not conviction.  Democrats get away with these crimes, and worse, with the help of major media because they tell better lies, fall back on identity politics, white guilt, gender guilt, guilt, guilt and more guilt.  Pardon me while I vomit on seeing Dan Rather, Brian Williams and Bill Clinton on TV taking applause, accolades and big bucks.

Of course much of the reason I want to see Judge Moore elected is that he is a reliable conservative and will help the Republican party do the work that needs to be done to recover from the many years of liberalism we have suffered.  And, suffered we have…

Liberals destroyed the real estate market and home construction at the turn of the century, with “Liar Loans,” home purchases predicated on inflation paying for the mortgage with “roll-over” loans, a Ponzi scheme on analysis and they never work.

It failed in 2008 when the “insurance” was written as “Credit Default Swaps” that were found to be worthless, just as our currency now has no basis since Richard Nixon’s bright ideas at Brenton Woods in 1971, the invention of “Bernanke Bucks” and “Yellin Dollars.”  The Dollar literally now stands for nothing! “The full faith and credit of the United States?”  When will the world catch on?  Pray it is not in your lifetime.  The world will…

Mr. Trump is the only politician that sees our reality and the DC establishment can only scream, “Tell me it isn’t true!”  Sorry, striped pants guys, it is true, America is a fiction, an avatar, an entity without substance and Mr. Trump is the only man who can see the light and keep it from becoming a locomotive in our tunnel of fables, myths and lies.  Yes he is coarse, obnoxious and an ex-groper, but he is our President.

The people of America can turn this around with the very simple maneuver of “Vote Out!”  If they are in, put-them-out.  Send them home to a parade or a rope; their people know.  Do this for the next three elections and the we people will be in charge.  Then, the bureaus.  Flush the toilet.