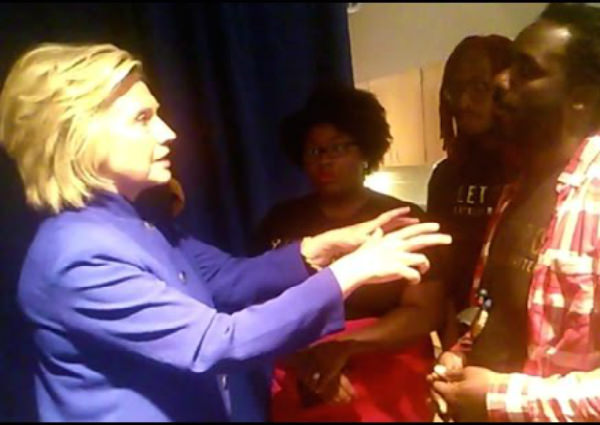 Black Lives Matter must make Hillary nostalgic! One of its better known predecessors was the militant SNCC. It was accused of Communist affiliations, though Howard Zinn, one of its advisers, proclaimed it was fundamentally an organization of “Black Belt and Northern Negroes angry at American society and determined to change it.”

This was followed by another radical if not revolutionary SDS “Students for a Democratic Society” with black and white members. Others included various “Black Power” advocates, including the Black Panthers, who favored a black nationalism based upon Maxism and Leninism. Even more extreme were the Black Muslims, who demanded complete separation of the races, and a black state in the South.

Whatever the motives of these militant dissidents – whose causes may deserve sympathy, as we see how Democrats have otherwise neglected them – their methods are nevertheless hard to vindicate, particularly when interfering with the rights of innocent third parties. Resorting to a lawlessness in any other connection – would be known as “malicious mischief.”

Soros-funded protestors – attempting to turn Charlotte, Baltimore, Cleveland and Ferguson into “sister cities” to those exploited by Soros in the Ukraine – block the streets with walls of their bodies.  Tumults and arrests gain momentum, while some are hurt and others are even shot dead. And a vital question, neglected at the moment, is what greater illegalities will spring from these? The permanent implementation of UN peace keepers and foreign police, trampling on U.S. Sovereignty to be an authoritarian “protectorate?”

Hillary has come full circle. Having savored the black protests of the turbulent sixties, she must feel right at home in the turbulent 21st century. Watching the long and successive waves of racial tumult in the United States, she sanctions and feels right at home with the Soros-funded destabilization. Her rapid expansion of the “refugee” population into black urban centers, guarantees the blacks will soon be subjugated to Shari, if Hillary is elected..

The American-born “black dhimmi” are in danger of even worse subjugation as truly second-class citizens, with lower jobs, higher taxes, and black females forced to wear burkas… if they vote for Hillary!  And if even a substantial number of blacks are recruited to Islam while in prison, they will still remain dhimmi – second-class citizens under Sharia – the remainder of their lives.

Hillary Clinton’s new era of Civil Rights, not for blacks, but for Muslim “refugees” is just beginning.  If she is elected president. Trotsky-supporting Life Magazine in the 1960s chose Hillary as an exemplar of the protest generation. And she will soon support the protests of “refugees” over indigenous American blacks. That is, if she is elected.