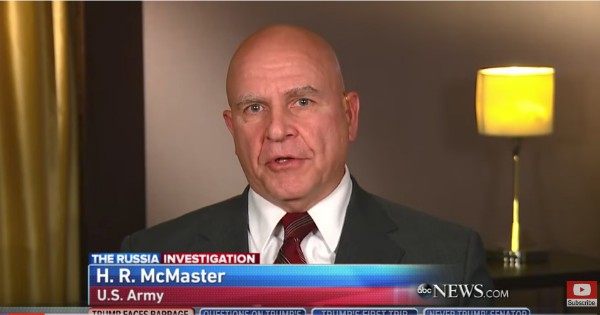 America cannot afford one more week, one more day or one more minute with H.R. McMaster, as the White House National Security Advisor,  when he has manipulated every major policy issue to move in a completely opposite direction, whether on Afghanistan,  Russia or North Korea and several other issues, from President Trump’s agenda and America’s best interests.

While McMaster continues to follow a mix of Bush and Obama policy, he is in the process of purging every single Trump loyalist, who implicitly and thoroughly understands the current threats America faces, and he is actively placing America in harm’s way.

McMaster is targeting people, who were chosen to best implement President Trump’s policy, that he outlined during his campaign. Anyone advocating for firing Obama holdovers is on McMaster’s list to be replaced. Others can expect to be dismissed, if they oppose the Iranian Nuclear Deal or criticize Islam.

One of McMaster’s first orders, in February, was an explicit instruction to all staffers, who came in with President Trump. McMaster, a big leaker himself, has ordered them not to point out that Obama holdovers, such as senior Obama aide Ben Rhodes, were still in place and undermining President Trump and leaking damaging classified information to the press.

In light of McMaster’s refusal to do the President’s bidding , when Steve Bannon and Trump both pressed him to fire Obama holdovers, it is hard to understand how he still holds his job. He refused to fire any Obama holdovers on a list prepared by Derek Harvey, and he asserted that hiring and firing National Security Council staff was under his sole authority; however, over fifty percent of the NSC’s staff are Obama holdovers, who should have been terminated over six months ago.

Derek Harvey was a top Middle East advisor to President Trump and a former Defense Intelligence Agency colonel, who served in country in Afghanistan and Iraq for decades, either in uniform or the intelligence community. He wrote a paper months before 9/11, in which he stated that both Al Qaeda and the Taliban posed strategic threats to the United States. He also shared President Trump’s view that U.S. officials must declare our country is at war with the “radical jihadist agenda” and “militant Islam”, and he was fired by McMaster in March.

Ezra Cohen-Watnick, a former Defense Intelligence Agency operations officer and an associate of former DIA Director Michael Flynn, drew McMaster’s ire, because he noted the CIA was politicized under President Obama, and he had provided proof of Obama surveillance of President Trump, by Obama personnel, to Intelligence Committee Chairman Devin Nunes. He was saved once from termination, when Trump interceded and overrode McMaster’s decision to replace him with Linda Weissgold, who helped draft the Benghazi talking points which blamed a video protest for the Islamic terrorist attack, that murdered four Americans.

But soon, Cohen-Watnick was fired anyway, due to his “anti-Muslim fervor” and “hard-line views”. There’s no room in McMaster’s NSC for anyone telling the truth about Islamic terrorism.

In May, Adam Lovinger, a Trump loyalist and national security strategist on loan from the Pentagon, had his security clearance revoked, and he was fired and escorted from the White House. Lovinger, who is a seasoned strategic analyst, had done nothing wrong other than oppose McMaster, by supporting India, rightfully so, over Pakistan.

While President Trump has been fairly irate over his advisor’s inability to arrange the U.S. withdrawal from Obama’s Iranian Nuclear Deal, suffice it to say that McMaster supports the deal. McMaster also refuses to publish the side deals Obama made with Iran and hid from the American people, which largely led to Richard Higgins’ termination in July.

As Daniel Greenfield explains in several Front Page articles, Richard Higgins was a top NSC official, who advocated for the declassification of all documents pertaining to radical Islam and Iran, but he was specifically focused on declassifying Obama’s 2010 Presidential Study Directive 11, which outlined the Arab Spring [Winter] and provided a security assessment on a chaotic Middle East. This PSD-11 is seen by many former national security officials, such as former Assistant Secretary of Defense Frank Gaffney, as the evidence and blue-print of President Obama’s close ties to the Muslim Brotherhood and other Islamofascist groups.

Pete Hoekstra, the former Chairman of the House Intelligence Committee, has also called for the declassification of PSD-11. He links it to the rise of the Islamic State.

Higgins was fired, after he presented the argument that President Trump is under a sustained attack from subversive forces within and outside the government, who are using every and any tactic possible to defeat the President’s nationalist agenda. Janas Winter and Elias Groll posted Higgins memo on August 10th in Foreign Policy that read:

“Globalists and Islamists recognize that for their vision to succeed, America, both as an idea and as a national and political identity,

must be destroyed” … arguing further that this has led “Islamists [to] ally with cultural Marxists”, but over time, “Islamists will co-opt

the movement in its entirety.”

John Guandolo, a former FBI agent, has been heavily involved in the investigation of the domestic Islamic threat. He has worked tirelessly to bring awareness of the threat of Islamic terrorism, through his organization ‘Understanding the Threat. He now warns that McMaster’s termination of Higgins undermines our ability to fight Islamic terrorism, and McMaster is unfit to for duty, because he “is standing in the enemy camp” and refusing to fire Obama holdovers who are clearly statists and Marxist, who are pushing an agenda that is counter to the facts and counter to the national security interests of the United States.

McMaster also forced K.T. McFarland to leave her position as Deputy National Security Advisor, and she was replaced by Dina Habib-Powell. McFarland is one of the brightest minds and one of the most qualified and capable in the intelligence community. Habib-Powell, an Egyptian immigrant, has no national security experience and claims Uma Abedin and Valerie Jarrett for friends. McFarland was most likely replaced, because she had written “Global Islamist jihad is at war with all of Western civilization”.

One should also note, McMaster is deeply hostile to Israel and Trump, while President Trump and his loyalists are pro-Israel.McMaster consistently calls Israel “the occupying power”, according to senior officials. He also advances the false narrative that a country named “Palestine” existed prior to 1948.

McMaster fails to see that Islam is inherently violent throughout its core doctrines. He prefers the politically correct narrative that jihadists are perverting Islam. And whether it’s this issue or China, NATO, Russia, North Korea, Syria or Afghanistan, he countermands President Trump far too often for comfort. McMaster’s views are extremely dangerous for America and he must be fired.

America is witnessing a bitter struggle for the future of American foreign policy, and this policy must not align with Obama cronies and “deep state” operator’s status quo decisions. This policy must not be made by H.R. McMaster, who placed Israel-hating, pro-Hamas Kris Bauman on the Israel-Palestinian desk, and President Trump must immediately recall Stephen Bannon and Dr. Sebastian Gorka and all his other recently purged loyalists, if his policies are to be properly executed and successful regarding the most critical issues of the day. An American foreign policy without McMaster, his disruptive and duplicitous influence, is the only path Trump can choose to ensure a national security policy that actually keeps America safe.