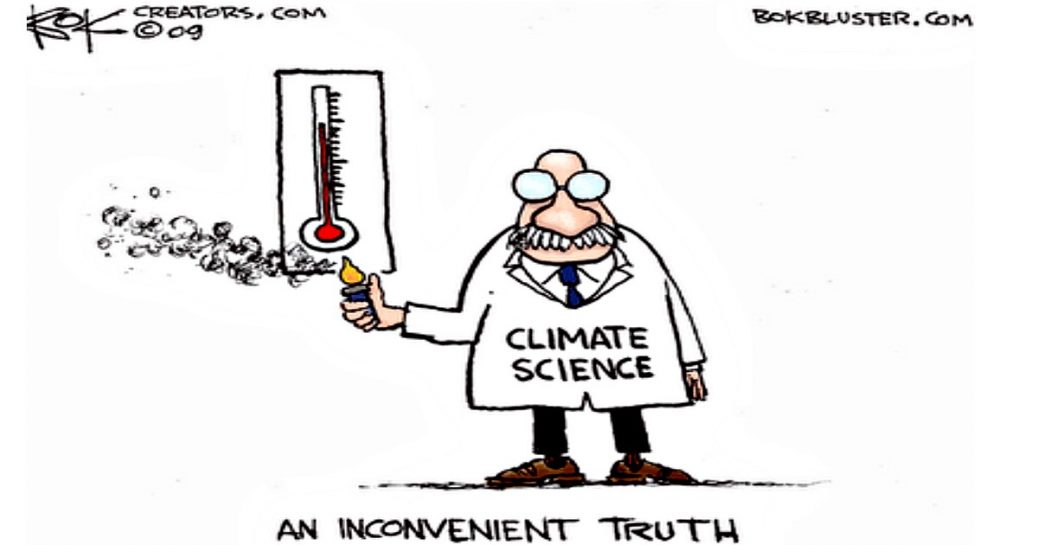 Original research said the 18-year warming “hiatus” started in 1999 was caused by changes in solar output, our orbital variations and other physical factors. Therefore: “Climate change is natural!”

Jim Hansen claims heat energy captured at night warms the atmosphere after the sun goes down to cause global warming. Jim says the heat is trapped by a reflecting carbon dioxide shield topping the troposphere, the lowest layer of atmosphere, 60,000 to 100,000 feet thick depending on where you are and when.

This is not supported by facts as gases cannot form reflective shields. Only liquids and solids can be reflectors as molecules have to be in contact to form a surface. Gas molecules cannot form surfaces. They only reflect at very low angles in mirages through what are called Schlerin phenomena that is geometric, requiring very low angles that only transmit; not reflect, but the simple fact there is no record of the atmosphere warming at night.

The entire gain in temperature from the beginning of the industrial age has been 0.8 Celsius degree, 1.44 Fahrenheit degrees. It took 160 years which is five-thousandths degree per year, a quantity we cannot measure reliably. It is insignificant and what statisticians call “approaching zero.”

No science writer or main-stream journalist has reported this quantity is “…within the circle of confusion,” “experimental variation” or “beyond measuring capabilities.” It is ridiculous.

Climate scientists at the German Max Planck Institute say there is too much uncertainty in our observed data to determine the cause of the 18 year haitus in warming since 1999. This is a dodge to avoid being put on the spot to justify the greatest cash cow science has seen since Alchemists claimed they could turn lead into gold with yolks of Griffin bird eggs. The Griffin bird was a myth just as anthropogenic global warming is a myth.

The US federal government employs 11,860 Ph.D.s to study global warming in a dozen bureaus and even more agencies with most duplicating work the essence of which is coming up with greater fantasies. The total cost is $1.06 billion, then they offer another $5.6 billion for grants that could employ another 62,222 Ph.D.s, but most of that money goes to universities with no accounting or follow-up because it is “research.”

Much Federal grant money goes to famous professors who never teach in spite of published responsibilities in college catalogs while undergrads are herded into auditoria with 300 classmates to be taught by a grad student trying to get his Ph.D. so he can get on the gravy train. Said “famous professor” will show up only when he wants to try out a new presentation he’ll be doing for big money in a week or two and it will have nothing to do with what you are going to be tested on.

Some in academia are heartsick about this and men like Dr. Roy Spencer at the University of Alabama Climatology Department are speaking out only to have their offices shot up after Al Gore had castigated him for having reported data that killed the carbon tax. This is a battle for money and power; nothing more.

If you want to see how these people work go to Amazon.com and input “Vapor Tiger” to the search routine and see the more than 1,000 angry, negative reviews heaped on my book by professional, paid, Green Gesatpo. Mixed in you will find a few honest reviews by objective readers who actually bought the book, but the angry global warmers have destroyed this book. The audio version outsells the print and Kindle versions 15 to 1 because it is marketed separately, the evil bunch have not found it yet and audio books are becoming very popular.

The real problem in American physical science is that too many young people want to be physical scientists so the universities make the curricula excessively difficult to skim the cream of the crop. In my class 180 started and six of us finished, 3%, but still too many go on to get Ph.D.s and there are not enough jobs, which is caused by mismanagement of research that should be done.

Everything in the journals has to be “new!” Confirmation is not enough for journal publishers so we have a body of work much of which is poorly done and a significant percentage is fraudulent. We are courting the collapse of physical science over two stupidities: Man-caused global warming and “Man in space! Going where no man has gone before,” because it is stupid.

Medicine and Law solve the numbers problem by having arbitrary tests to control the number admitted to the club, and add long “internships” and “residency” barriers. All of this drives up the cost of medicine and legal services in ways that have nothing to do with improving either. Meanwhile back at our swamp:

Scientists debated the existence of the “warming hiatus” from 1999 to now with more cooling in the last 18 years than warming in the previous 160, but the truth is that neither of these changes are significant. They are, in fact, microscopic.

Many in the more alarmist camps claim the debate is “settled” after the National Oceanic and Atmospheric Administration (NOAA) published a study claiming the “hiatus” was an artifact of biases in the way scientists measured sea surface temperatures from ships and buoys! JPL spent $4 million looking for ocean heat and pH changes after Jim Hansen said the missing heat was in the seas, but they did not find it, nor were their any pH changes. So much for yet another Hansen fairy tale.

A study, led by NOAA scientist Tom Karl, found “corrected and updated global surface temperature data, “…do not support the notion of a global warming ‘hiatus.” Karl’s methodology was highly criticized by experts on all sides of the global warming debate, including those skeptical of man-caused global warming.

Criticism peaked after House lawmakers launched an investigation of the study to see if it was edited to support former President Barack Obama’s climate agenda. A political battle ensued after Republicans on the House Committee on Science, Space and Technology subpoenaed NOAA for records on the study.

The Karl study came under fire again after former NOAA scientist John Bates blew the whistle on Tom Karl saying “He put his thumb on the scale” to get results to debunk the “hiatus” and bolster Obama’s agenda for the international climate talks.

NOAA is bringing in outside experts to review the Karl study and take appropriate actions if necessary. We suspect the “appropriate actions” will be to insert “correction factors” where needed to bring the data into a politically correct dimension. Professor Ivar Giaver, a Nobel Physics prize winner in 1973 then told Mr. Obama that NOAA was wrong; that man-caused global warming was a myth and he found himself testifying to the legislature of the State of Washington to justify his position. You can see it at:
https://www.youtube.com/watch?v=TCy_UOjEir0&t=89s or just input “Ivar Giaver” to You Tube and you’ll get there.

Dr. Giaver’s testimony includes that NOAA has been changing old records to fit the politically correct concept that we are now “warmer than ever” when the peak year was 1936 and the 30’s decade was the warmest in recorded history. Dr. William Bates recently retired from NOAA and says they published a fake study for the Paris UN conference. Bates has testified to Congress that NOAA made a blatant attempt to intensify the impact of global warming to eliminate the pause and decline and showed the London Daily mail irrefutable evidence. He noted that NOAA did not archive that data for public, independent confirmation because it was clearly faked.

These are not inconsequential academicians. They back up what they say with facts and verifiable conclusions including that there was a decline in Earth’s average temperature during the World War II years as we increased atmospheric CO2 with much greater industrial activity, burning down Europe and Japan, then rebuilding them. And, that there has been a decline for the last 18 years as we have previously noted.

In conclusion: The facts in the trends of Earth’s temperature have been manipulated by several bureaus and in several government funded studies to alarm the people with the lie that CO2 causes “global warming” when the record and simple demonstration experiments of the kind we have published several show clearly CO2 does not heat the atmosphere; it cools it by driving out water vapor that is seven times the infrared absorber as is CO2. The issue is critical as CO2 is a by-product of 80% of all energy production and that is the key driver of this issue.