The Fall of the Fourth Estate 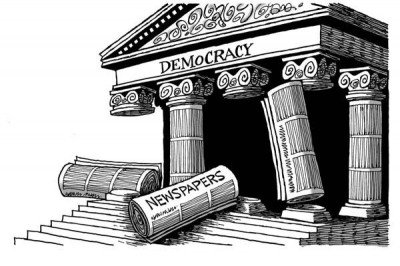 When the race for the White House began, who among us could have conceived of the events that have since transpired; something happened along the way that would change everything. It is quite amazing what has occurred since Donald Trump announced his candidacy for president. Not only did Mr. Trump change the dynamics of politics, and threaten the very heart of political correctness, he may have also rewritten the rule book for journalism.

In a recent article in the New York Times, the writer, with what appears little forethought, explains why the fourth estate, news sources like the Times, must set aside any restrictions, neutrality, objectivity, and standards of journalistic excellence and integrity, and do whatever is necessary to defeat Mr. Trump, whatever the consequences to the profession. Many would say in the case of the Times, this has been going on for years.

In another reckless attempt to deny Mr. Trump any chance of victory, a commentator on a cable station offered up this bit of irrational wisdom, republican leaders should approach Mrs. Clinton and make this offer, they will make every effort to ensure her the presidency; in return she would allow republicans to choose the replacement for Justice Scalia.

It is apparent that most of the main stream media seeks to undermine the republican candidate’s chances for the presidency. But what has to be an uncharacteristic and unprecedented effort by a particular news organization to destroy Mr. Trump, not only politically but personally, is the Daily News. New York’s, so called, hometown newspaper, has over the last year been on what seems a vendetta, with day after day of insulting, damning, and highly contentious reporting. Cover stories depicting Mr. Trump as a clown, devil, among other denigrating cartoonish characters, have been displayed in full color for all to see. Criticizing and condemning his opinions and positions on just about all the issues are now integral parts of the News’ editorials.

History abounds with highly contentious, controversial and provocative campaigns. The dirty tactics and harsh personal insults by the candidates and the press in many cases were far more abrasive than today. In the Abraham Lincoln vs. Stephen Douglas campaign; this contest tore the nation apart with the slavery issue upper most in consideration. Lincoln’s victory resulted in seven of the Southern States ceding from the union to form the Confederacy, with Jefferson Davis as president.

In the Rutherford B. Hayes vs. Samuel J. Tilden race, Tilden was branded a thief, briber, and a drunken syphilitic. Theodore Roosevelt, in a primary challenge by William H. Taft, was shot in the chest by a fanatic, but was still able to finish his speech. They split the republican vote, giving victory to the democrat Woodrow Wilson. And of course most of America can recall Bush v. Gore, the Florida chads, the constant counting, lawsuits and the eventual Supreme Court decision giving George W. Bush the presidency, and eventually being the cause of a psychological condition we come to know as “Bush Derangement Syndrome”. These are but a few, and as they say, the rest is history.

Many will blame Mr. Trump for his predicament and the media’s response to his intemperate behavior, and what some believe extreme positions on issues. Then there’s his freewheeling bravado, comedic gestures and expressions, sometimes street talk, and lack of sensitivity and proper articulation of speech that rubs the elite and establishment in ways they’re not use to. And where is Mrs. Clinton in all this, it appears the media, to a great extent, are giving her a pass.

We have another 50 plus days remaining, but eventually it will all be over, and we can go about our daily routines and await the consequences of our voting decisions. But it has been one hell of a ride, and love him or hate him; we have Mr. Trump to thank. And as a parting refrain, let’s remember the prophetic and wise words of the father of talk radio, the late Bob Grant who often remarked, “Folks, its sick out there, and getting sicker”.