NeoCons and Obama Brought Hell to the United States 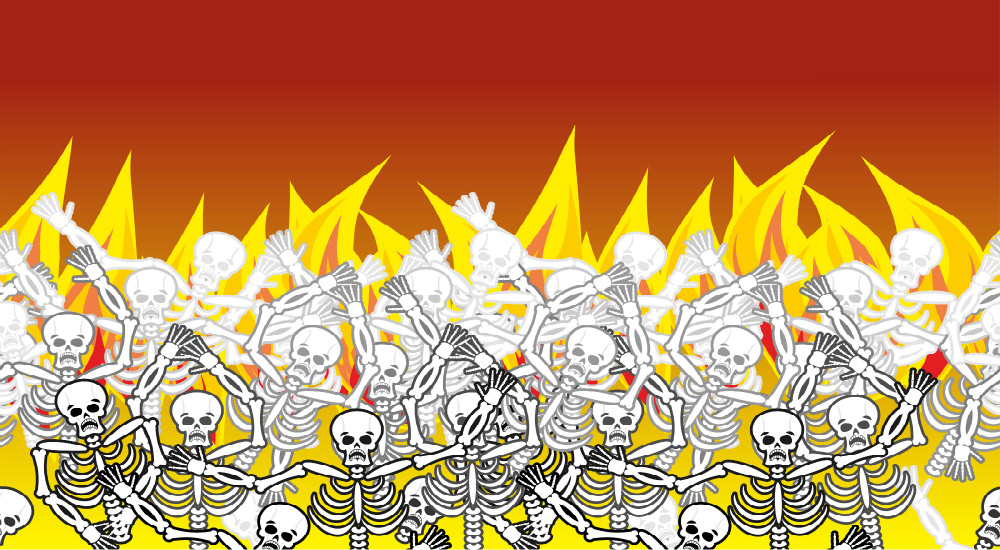 The 20th Century was the most destructive era in history. Deaths from all the wars and the genocides estimated at 160 million may seem small if the planet descends into the approaching holocaust. Globalization is the catchword of the ruling class. Sovereign nations are obsolete to the corporatists. Militarization for suppressing conflicts is the mission, since warfare among nations are passé. The old alliances based upon ethnic composition or ideology has vanished. Only dissenters against the New World Order pose a threat to the Novo Ordo Seclorum.

This New Order of the Ages has been in the works for over a millennium. Lest you forget the horrors of man’s inhumanity to man, a short vignette looks back at some of the worst practices of Totalitarian Collectivism.

Caution some of the images in this NOVO ORDO SECLORUM video are ghastly, but the chronological documentation deserves your viewing.

Statism is the common thread that links all totalitarian regimes. Most living souls do not believe that the Soviet, Lenin and Stalin gulag, is possible today. A diluted revulsion level of atrocities is characteristic of the media script of current events. Disconnect between what really happens and what is reported is so dramatic that reality is unknown to most people.

The term NeoCon, commonly used as a synonym for neoconservative begs the real issue. There is nothing conservative about a top down authoritarian central government. Originally, refugees from the liberal Marxist strain, the former Bush NeoCon cronies applied their perverted viewpoint to discredit the meaning of real conservatism. Now you have the Obama LibCons outdoing their statist cousins to advance the War Party outreach intervention, well beyond Iraq and Afghanistan.

Playing the political party label game never alters the fundamental foreign policy designed to use American youth as cannon fodder for the actual masters of the global hegemony. Under Obama and slated with designed regime change, were the countries of Tunisia, Egypt and Libya. Pakistan and Syria are next. Even the stern warning from China not to intervene or violate the sovereignty of Pakistan goes unheard. The march toward a Middle East conflagration rests upon a predictable attack on Iran. This is the obvious war plan. However, the evil empire has limits that superior targeting technology cannot predict a final outcome.

The NeoCons and their Obama administration protagonists share the same bloodline. They all foster a hell on earth for the general population. The unity of purpose is seen in their enduring determination to destroy an independent middle class and silence any dissenter that resists the coordinated enslavement of humanity. Imprisonment of the unruly on a massive scale, already planned by FEMA under Homeland Security provisions, is reminiscent of the sentiments of the ghost of Ezra Pound. John Kaminski provides an invaluable analysis.

Pound’s ghost comments: “What a strange occurrence! No battles are described; the empire was not attacked from without. The description is oddly like the French and Russian Communist Revolutions … the rich were stripped of everything and slept in the open. There are also parallels to modern America … the fish in the lakes and rivers die … there is no end to noise.”

The noise we do hear screams of lies, deception and fraud. How can we as a nation allow another Patriots Act extension? How can we tolerate the TSA and federal government tyranny that threatens the Texas state legislature to halt legislation that would classify TSA airport security procedures as a criminal felony or else face the reality of across the board flight cancellation in Texas? Or, how can we allow Congress their refusal to hold the phony POTUS Barry Soetoro accountable, when he ignores the war power act?

Where are the anti-war progressives, when their own anointed rock star violates the law to advance the Novo Ordo Seclorum’s extermination of threats to their global imperium?

Sincere paleo-conservatives understand the dynamics used by the elites to confuse the uninformed to believe that an actual terrorist cabal exists to attack and destroy our country. All the time the real conspirators reside in corner suites on Wall Street or in underground bunkers directing the next false flag diversion. NeoCon Watch tracks counterfeit conservatives and global loyalists that protect a bankrupt system for the benefit of select masters.This connection is familiar ground for regular readers of BREAKING ALL THE RULES. What may not be as clear is the direct link of the NeoCons with the debauch and manipulated financial markets, the fractional reserve central banking racket and the intentional deindustrialization of the American economy.

This pattern of despotic control was well known to the great libertarian Murray Rothbard. In The Axis of Deceit, Jim Grichar writes,

“The neo-con Wall Street group . . . elite groups that dictated – and still dictates – the policies and major actions of the U.S. government. Composed of an alliance of neo-conservatives from think tanks, academia, government, Wall Street elite, and the media, its philosophy was, and still is, espoused by the Wall Street Journal editorial page, among others.

A marriage of money and a social democrat version of a free market philosophy (more akin to fascism), these armchair authoritarians claim to know what is good for us, and, whether or not we like it, they are going to give it to us. Even if they have to lie to get their way. (To get a better idea of how Murray really had their number, read The Irrepressible Rothbard, a compendium of Murray’s articles from the Rothbard-Rockwell Report, for brilliant insights into how this group operates.)”

This analysis dates back to 2003. The financial meltdown of 2008 was no shock to the Statists who wage war against the public. The deliberate destruction of the economy is a calculated step in stripping the means of survival from the average peasant.

Ponder the consequences in the systematic elimination of the Soviet serfs in the Novo Ordo Seclorum YouTube. If you have faith in the U.S. government, that such eradication would be impossible in the “so called” land of the free, you are primed for an American version of Stalin’s Terror.

This is a sober alert. What you believe does matter. Once you connect the dots, you have a moral obligation to oppose the sham of the official fantasy story that keeps most citizens in an unremitting cloud of self induced denial. Maybe a slick video with a catchy tune might break through the fog. Watch Nonsense Fairytales Propaganda Crap… Still You Believe – Osama & The Bin Ladens. The true terrorists do the bidding of the globalists.

If you are afraid of the wrath of the New Order of the Ages, just appreciate the penalty paid by Ezra Pound as he languished in prison for confronting absolutism. Mr. Kaminski continues and cites the importance of Eustace Mullins.

“The literary device of Pound’s ghost can only be Eustace Mullins, Pound’s longtime assistant and protegé, who has over the decades become every bit as notorious and revered as his mentor. While Pound created the reputation in letters as the most authentic American poet of the 20th century, Mullins — who started out as the imprisoned Pound’s devoted assistant — has done the same for himself in the area of revealing the secrets of the Federal Reserve scam and chronicling the hidden history of that certain tribe, to whose exploits we now return.”

The NeoCons never rest and their depth of deceit has no limits. Wired magazine reports that There’s a Secret Patriot Act.

As a member of the intelligence committee, he laments that he can’t precisely explain without disclosing classified information. But one component of the Patriot Act in particular gives him immense pause: the so-called “business-records provision,” which empowers the FBI to get businesses, medical offices, banks and other organizations to turn over any “tangible things” it deems relevant to a security investigation.”

The torment that Americans suffer is poised to explode. The government has manufactured unlawful directives that provide the cover to herd any protestors into a hellhole of torture. Maybe this prospect does not worry your trusting jingoistic confidence. Perhaps the acceleration toward a global apocalypse might get your hairs to stand on edge. Yet, most will dismiss this admonition as fear mongering.

Since the lies that folks hear every day from the media and from their fearless leaders keep so many people in a state of drugged daze, the path to oblivion escalates unimpaired. The elites are not immune to their own devices. The gulag they have planned for us can be used to incarcerate them if you refuse to comply with the Novo Ordo Seclorum. Your life has meaning; do not fear the New Order of the Ages terror. Your own dignity requires active resistance.