The Democrat Party is America’s Most Powerful Hate Group

On January 20, 1961, newly elected and duly sworn into office, President John F. Kennedy, a Democrat, ended his memorable and stirring inaugural address with the words, “asking for God’s help, here on Earth, God’s work, must truly be our own.” Despite his obvious moral failings in his private life, President Kennedy’s personal ambitions were transcended by his belief that his primary duty in public life was to love his country and to serve her people. That said, we also know he was a Democrat, and the last Democrat to serve as President whose efforts as Chief Executive were meant to build up America, rather than to tear America apart.

Following the tragic assassination of President Kennedy on November 22, 1963, up to and including the present, there have been four more Presidents from the Democratic Party; Lyndon Johnson, (1963-69); Jimmie Carter (1977-81); Bill Clinton (1993-2001); and Barack Obama, ( 2009-?). Under their individual and collective brand of so-called leadership, the United States of America and her people have been steadily and systematically dismantled, fragmented, weakened, and mercilessly abused. During these past 50 years, thanks to the national Democrats and the left-wing allies in Congress, the White House and our Federal Court System, the national Democratic Party has become America’s largest and most powerful “hate group”.

Lyndon Johnson, also known as “LBJ” took America into the malicious morass of the Vietnam war, and into the abyss of the equally malicious lie known as the “Great Society”, spending hundreds of billions of dollars on a vast system of socialist welfare spending that perpetuated poverty, especially in our cities and our minority communities, in a deliberate move to weaken the poor and less advantaged into federal dependency. At the same time, we fought an undeclared war in Vietnam and Southeast Asia for a decade, resulting in more than 58,000 needless deaths in the U.S. Military, only to lose the war and witness the humiliation of reunification of North and South Vietnam into one Communist nation. LBJ partnered with another, degenerate member of the Kennedy clan, Ted Kennedy, to engineer passage in 1965 of new immigration laws that started the stampede of mass legal and illegal immigration that eventually evolved into the “open borders” mess that brings in terrorists, America-haters and uneducated millions who promptly entered the social welfare system immediately upon arrival.

James Earl “Jimmie” Carter, sat fecklessly in a cardigan sweater by the fireplace one January evening and told Americans that we were in a “malaise”, or more directly expressed, Americans were in a foul mood, anxious and frustrated by both an economy in shambles with high unemployment and high inflation, as well as a foreign policy that created the conditions to begin the awakening of long simmering but dormant radical Islam, with the takeover of the American Embassy and the “triumphant” return from French exile of the Ayatollah Khomeini to Iran and leadership in 1979. Carter sat in a cardigan sweater and blamed Americans for a mood of “malaise” that Carter created.

Jimmie Carter’s primary accomplishment in four years as President, was the humiliation of America before the rest of the world, as well as his own place in history as having been humiliated personally in the eyes of the majority of Americans.

William Jefferson “Bill” Clinton began his Presidency on January 20, 1993 with his “gratuitous attendance at the “Gay and Lesbian Inaugural Ball” in Washington, beginning on day one of his Presidency to repay the support in his election campaign of the LBGT Lobby. Soon after, Clinton announced the rueful break with two centuries of military tradition and law by instituting the infamous “Don’t Ask, Don’t Tell” policy permitting Gays to serve without fear of discharge. He put “Hillary the Horrible” Clinton in charge of an ill-fated attempt to ram socialized medicine down the throats of the American people, and Bill Clinton, with the successful enactment of the North American Free Trade Agreement or “NAFTA”, accelerated to “warp speed” the exodus of American businesses, jobs and wealth to foreign nations such as Mexico, that had begun in the 1970s. Later in his Presidency his womanizing caught up with him and, after having one or more sexual affairs in the White House, was impeached by Congress, not for womanizing but for proceeding to lie to Congress and lie to the entire nation by denying the sexual immoralities. 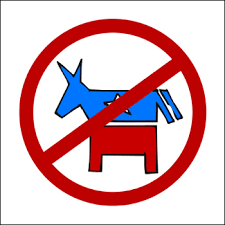 Three previous Democratic Presidents had succeeded in seriously damaging and weakening America, by the time the notorious Barack Hussein Obama was elected and sworn in as the 44th President on January 20, 2009. His eight years in office have included the most reckless borrowing and spending of any administration in history. Half our entire national debt ($10 Billion of the $20 Billion) was created in just the past eight years of Obama’s tenure. Yet Mr. Obama has absolutely nothing to show for all that reckless spending. The economy is in shambles, the infrastructure of highways, bridges and public lands is crumbling, while the military forces and weaponry that must defend our nation is being systematically dismantled. Meanwhile tens of millions of Americans have been added to the already overwhelming financial burden in government through swollen welfare rolls, food stamps, forced early retirements, long term unemployment, and social security disability fraud. Mr. Obama, whose sworn duty along with Congress under the Constitution is to “promote the General Welfare, has instead promote the welfare of every small minority and special interest groups imaginable, in response to their collective loud potty mouths, collective asinine demands, and their collective calls for elevation to privileged and special legal status of their immoral and degenerate agendas. Mr. Obama has used the “bully pulpit” leadership tradition begun by Teddy Roosevelt, not to uplift, inspire and unify, but instead to berate, lecture and divide Americans. To Barack Obama, “(radical) black lives matter”; “gay and lesbian lives matter”;“radical Muslim lives matter”; “illegal alien lives matter”; convicted criminals lives matter”; meanwhile, the lives of ordinary, law-abiding, responsible working Americans, do not matter; the lives of Christians, foreign and domestic, do not matter; the lives of American military servicemen and women do not matter; the lives of our veterans do not matter; the lives of the “thin blue line” of peace officers in our police and sheriff departments do not matter; and, with all certainty, the protections due to Americans under our Constitution and the Bill of Rights, in the mind of Mr. Obama, do not matter at all.

In the half century since the assassination of John F. Kennedy, under the Presidency of the four Democratic Presidents that followed, as well as the years of Democratic control of Congress, and Federal Courts, the national Democratic Party has deliberately and with malice aforethought trampled on the general welfare of the decent, hardworking and law abiding majority in America, while trampling on our rights and wastefully expending our tax dollars, to pay false homage to dozens of undeserving but vocal and demanding minority special interest groups, to the severe detriment of the much earned and deserving general welfare of the vast majority of our nation’s citizens.

The national Democratic Party has become nothing short of America’s most powerful “hate group”.

The American left wing, socialists and Democrats are the party that despises, attacks and works diligently and unceasingly to destroy all that is good within America. This “hate group” called the national Democratic Party demonizes: (1) law abiding morally upright American citizens; (2) unborn children; Christians; (3) Constitutional Conservatives; (4) legal gun owners; (5) job-producing energy businesses in oil, gas and coal production; (6) rural and small town America; (7) the ranching and farming West, including the “horse culture “ of wild mustangs and ranchers; (8) small business owners; (9) our police and our military, including veterans; and (10) above all, the Democratic party despises God, the Bible, Christianity and the ethical moral codes and common law inherent to Judeo-Christian foundations cited by the Founding Fathers 240 years ago.

Although the Judeo-Christian, moral and ethical, Constitutional Conservative American majority is clearly despised by the “hate group” called the Democratic Party, we the American majority do not hate, because Jesus Christ taught us that the greatest commandment of all is to love one another, and not to hate the sinner, but to instead only hate the sin. The vast majority of Americans should, and indeed do, hate sin. However, the Democratic Party clearly despises us. To paraphrase John F. Kennedy’s words from 1961; Americans who are Constitutional Conservatives, Christians and law abiding, ethical citizens must “ help every friend, and oppose any foe “. We must love and support each other, but at the same time, we must band together and fight the Left Wing. We must fight the evil of Barack Obama and Hillary Clinton. We must fight the immorality of communism, fascism, radical LBGT groups, radical Islam, collectivist Socialism, radical Atheism, and every foe of our Constitution, Bill of Rights, and Ronald Reagan’s “Shining City on the Hill”. A famous aphorism states, “ all that is required for evil to prevail, is for good men and women to do nothing “. Above all, therefore, righteous, conservative and patriotic Americans must fight evil, so that the good may once again prevail in America in the historically prevailing form of “Liberty, Justice and Virtue”.