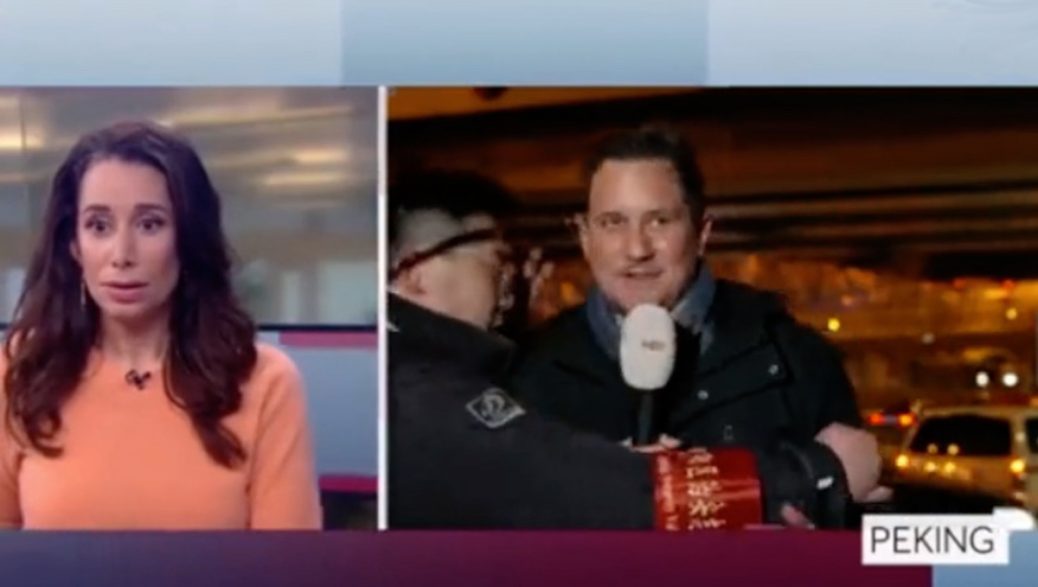 Shocking video from Friday shows a Dutch reporter being bodily dragged away by a Chinese security officer outside an Olympic arena during a live broadcast of the Beijing Olympics.

The incident is shocking proof of just how much China opposes free speech and freedom of the press.

The reporter, Sjoerd den Daas, of the Netherlands Public Broadcasting outlet NOS Nieuws, is seen in the clip being shoved and herded away from his camera by a Chinese security agent in a black jacket and red armband.

In its Tweet of the video clip, NOS wrote: “Our correspondent [den Daas] was pulled away from the camera by security guards at 12:00 pm live in the NOS Journal. Unfortunately, this is increasingly becoming a daily reality for journalists in China. He is fine and was able to finish his story a few minutes later.”

By some reports, the Chinese security guard is heard saying in Mandarin, “hurry up, step quickly,” as the Dutch reporter says, “I’m allowed to be here.”
NOS editor-in-chief Marcel Gelauff said the incident was “a painful illustration” of how the foreign press is treated in Red China. “Sjoerd has often told and shown that it is difficult as a journalist in China. There is a far-reaching tendency to curtail freedoms, and this may be even stronger because of corona,” Gelauff added, according to Dutch newspaper Algemeen Dagblad, via Yahoo News.

The treatment that Sjoerd den Daas faced is nothing new in China. The Foreign Correspondents’ Club of China recently decried the increasing harassment that journalists are subject to in the communist nation. In a report released in January, the organization revealed that foreign reporters are constantly slapped with nuisance lawsuits by Chinese officials. They are also hounded off streets during video reporting, face having their visas revoked, and are constantly ejected from the country. They also face attacks via tech, as well. They are routinely harassed by name on social media in China and elsewhere, they have their accounts and their devices hacked, and they even face physical assault.