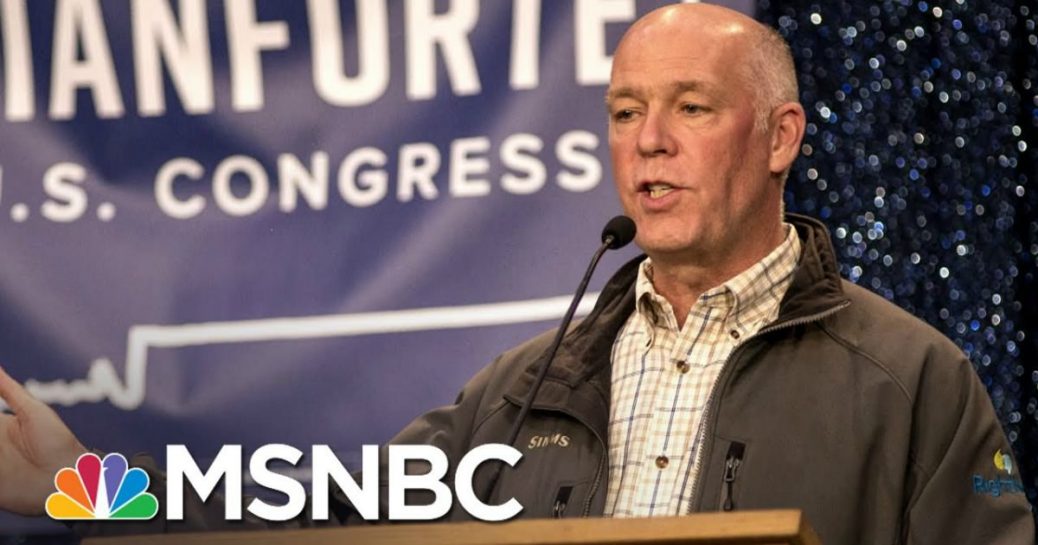 In the special election for Montana’s at-large Congressional seat (vacated by Ryan Zinke, who became President Trump’s Secretary of the Interior), the voters have spoken: Republican Greg Gianforte won by six points, or 50.2 percent. What has made this election truly “special” is the emergence of the specter of the mainstream media’s “Trump Derangement Syndrome.” A day before last Thursday’s election, Mr. Gianforte body-slammed Ben Jacobs, a pestering reporter for The Guardian newspaper. From the reportedly roughed up journalist’s Twitter feed, “Greg Gianforte just body slammed me and broke my glasses.” Ah, the inherent risk of in-your-face journalism.

The underlying problem here isn’t alleged fisticuffs, or one guy losing his temper. It’s the habitually jaded, one-sided “reporting” of the media that only besmirches Republicans. As any schoolchild knows, it takes two to tango in any fight. For his part, Jacobs likely overzealously entered a private room, allegedly “aggressively shoved a [voice] recorder” in Gianforte’s face and “began asking badgering questions” regarding the CBO’s report on the GOP’s American Health Care Act (Obamacare’s replacement).

Culturally, Montanans are known to appreciate large expanses, personal space and courtesy towards women. Perhaps his city slicker tactics were a step too far for Midwestern sensibilities? For context, Mr. Jacobs interrupted a conversation with Fox News’s Alicia Acuna, and disrupted her planned interview. She said, “Gianforte told him he would get to him later. Jacobs persisted with his question. Gianforte told him to talk to his press guy, Shane Scanlon.” Per Mr. Scanlon, “Jacobs was asked to leave. After asking Jacobs to lower the recorder, Jacobs declined. Greg then attempted to grab the phone that was pushed in his face.” After the reported melee ensued, witnessed by Acuna and her crew, the interloper was allegedly grabbed by the neck with both hands, slammed to the ground and punched. Acuna adds Gianforte exclaimed something along the lines of, “I’m sick and tired of this!” Could “this” refer to the constant, largely unfounded smearing of GOP politicians by the biased Fourth Estate?

That seems likely. If so, that political polarization is Barack Obama’s toxic legacy. Didn’t this responsibility-phobic playboy — abetted at every turn by the propagandist mainstream media — blame Bush for his eight years of failure? Hence, today’s baseless variation known as “Trump Derangement Syndrome.” Indeed, this is irrational thinking of the highest order. Seriously, President Trump’s February 17 tweet — “The FAKE NEWS media (failing @nytimes, @NBCNews, @ABC, @CBS, @CNN) is not my enemy, it is the enemy of the American People!” — is the “cause” for Gianforte’s scuffle?

If so, what of the military-style assassinations of innocent cops during the lawless Obama years? Back in 2009, did he not light the anarchist fuse by publicly chastising Massachusetts cops for “acting stupidly”? Furthermore, did he not feed that flame by consistently inferring that police officers were racist? And wasn’t his tenure highlighted by ambushed cops for unprovoked homicide? Is anyone in the press holding the ex-president responsible — for anything? Before fixating on Gianforte’s alleged momentary violence, the left should acknowledge the even more destructive consequences their own daily rhetoric inspires.