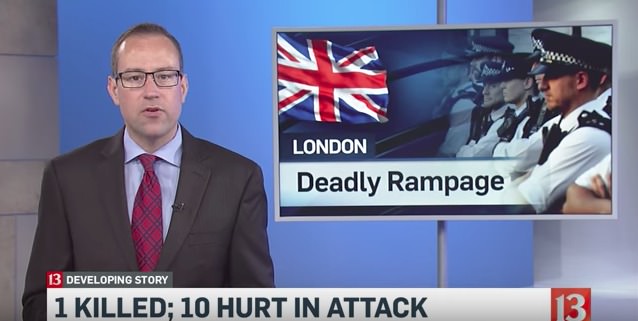 A vehicle ran into worshipers exiting mosque after midnight prayers for Ramadan in Northern London’s Finsbury Park district on Seven Sisters Road. One person has been arrested, reportedly, a white male. Fox News reports one dead, 10 injured. All injured have been removed to local hospitals. This is what is KNOWN.

What we do not know is whether this was an attack or an accident. Some reports say the vehicle was a van, others say it was a car. Some reports say that up to three men were involved, one with a knife. Some eyewitnesses say that the man arrested was detained by the bystanders until police arrived.

Watching the coverage unfold was more like watching it fold instead because the 24/7 news has so much time to fill, they will say something to fill up the dead air or have talking heads and pundits opine and speculate. Social media is much the same, with many getting their two cents worth in regardless of what they know.

There are several narratives already emerging. Some are decrying the media’s wording on reporting it as a “major incident” and are falsely saying if it wasn’t for the fact that the victims here were Muslims, the media would be rushing to call it “terrorism.” in my experience, the media most times has been slow to call an attack “terrorism.” We don’t yet know it was deliberate.

Some are reporting it as a “retaliatory” attack and have been blaming Tommy Robinson, a Brit who has called out Radical Islam, pouring out hate speech about his supposed “hate speech.” We don’t know yet that it was deliberate.

There are two intertwined threads also emerging. One is that it was an ISIS attack designed, by targeting Muslims, to incite discord and division between societal factions leading to heightened civil unrest. This is a real possibility as it is right in line with ISIS’s playbook. The vast majority of radical Islamic terrorism’s victims has been Muslims. The other thread is that this was indeed a “false flag” attack, but by other unspecified people, but with the same end intended.

All of the above assume it was a deliberate attack, which it may well have been, but we do not know that yet. What we do know is that it is a tragedy calling for our concern and our payers.