The Alt-Right is Not Right – It’s Left 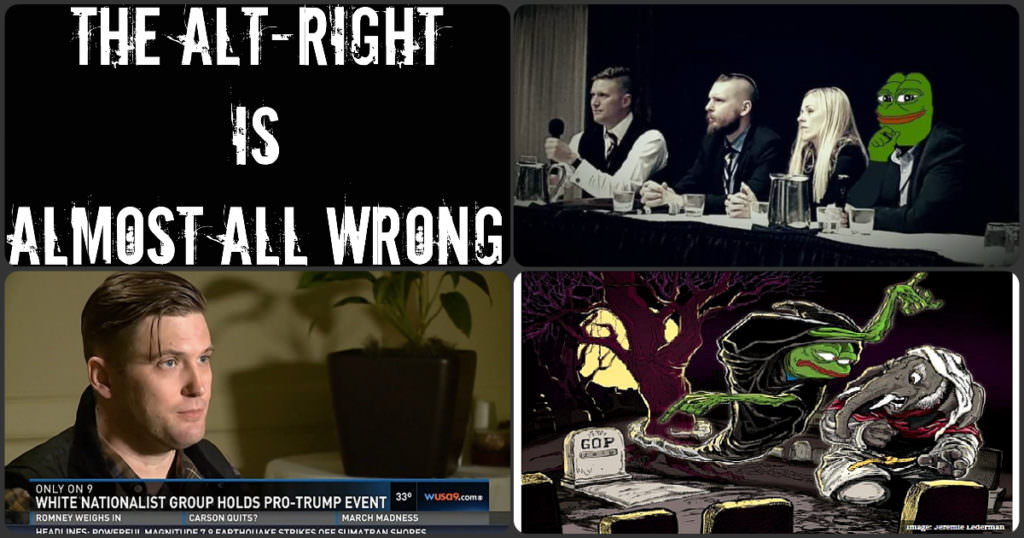 What exactly is the Alt-Right? We hear the term batted about a lot recently.

In November, 2016, USA Today, or McPaper (h/t: Jay Severin) attempted to explain the alt-right movement. “The alt-right — short for “alternative right” — is a movement that bucks mainstream conservatism,” writes USA Today. I guess it does!

They add that, “The Southern Poverty Law Center, an anti-hate organization, says the group’s main focus is ‘white identity’ and to preserve ‘western civilization,’ but how they go about calling for that is broad.”

Allow me to more accurately phrase that last sentence. The Southern Poverty Law Center, a leftist agency with a butt-load of cash (an operating budget of $45 million and an endowment in excess of $300 million), who labels every group who doesn’t tow their radical line as a hate group, defines the alt-right as focusing on white identity, or white nationalism.”

If this is the case, and it appears to be, the Southern Poverty Law Center, has by its own definition, proven that the alt-right isn’t right at all. It also disproves the claim that the group could even be remotely tied to “conservatism.” One of the pillars of conservatism is “The Golden Rule,” which automatically precludes white nationalism or racial supremacy of any kind.

According to McPaper, the white nationalist/supremacist Richard Spencer coined the term in 2008. If he uses the term alt-right to identify himself and his fellow believers – this begs a question?

Was President Woodrow Wilson a member of the alt-right? He was a racist white supremacist. So were President Lyndon Johnson and the late democrat Senator Robert Byrd. Margaret Sanger founded Planned Parenthood to halt the spread of the black race. I’d call that white supremacism. The KKK was the enforcers of the white supremacist Southern Democrat Party, the Dixiecrats. The list is virtually endless – replete with white supremacists, and all from the left – none from the conservative right.

Alt-right demonstrators hit the streets adorned with Nazi paraphernalia and Confederate flags. Neither of those symbols represents American conservatism. In fact, the rise of Hitler and the Nazi Party, which these nuts appear to be so fond of, was a tale of combat between two competing leftist ideologies – fascism and communism. Neither faction incidentally resembled conservatism or what we’ve come to know as “the right.”

The German KPD was the largest communist party outside the Soviet Union during the 1920s. In his famous 1931 writing, “Germany, The Key to the International Situation,” communist Leon Trotsky described them as, “the flower of the German proletariat.”

It was the Trotsky inspired KPD or German Communist Party vs. the Hitler led fascist “National Socialist German Workers Party” (Nazis). There were no “right-wingers” involved at all. And did I see the word socialist? By cracky, I did. I don’t know of anyone who would confuse conservatism with socialism. It was left vs. left. And it was recreating in Charlottesville, Va. – fascists vs. communists – ending in similar fashion – a fascist “Sturmabteilung SA” (stormtrooper), James Alex Fields, executing a communist counter-protester.

The alt-right is myth. It’s a name crafted to confuse the public into thinking these loons were spawned out of the conservative movement.

It should actually be relabeled, or labeled properly as the National Socialist American Party, because they are in fact fascists – not of the right and certainly not conservative.

But because of our woefully inept education system in this country, most believe fascism and Hitler were right wing. They couldn’t be more wrong. The fascists were leftists who had/have a lot more in common with communists than with free market conservative capitalists. The major difference between fascists and communists is that the former is nationalistic and the latter, internationalistic. I’m not sure that’s a word – but it should be.