On Tuesday, Vote for a Party – NOT for a Person 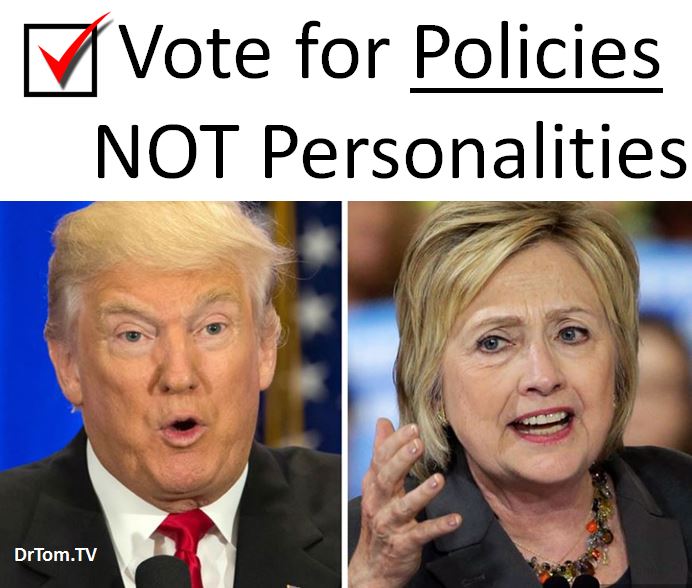 Although many Americans don’t know that they exist, party platforms matter. Every four years both parties convene to draft their respective party platforms. These platforms define what each party believes, and lays out the policies that party members holding public office are pledged to execute. Why is this important? Because a large majority of elected officials from both parties vote with their party’s platform: 74% of Democrats and 89% of Republicans do so.

What is at stake on November 8?

Based on their platforms, where do the two major political parties – and their candidates – stand on these critical issues? (Words within quotation marks are direct quotes. Other words are paraphrases of the platforms. We encourage you to read each party’s entire platform.)

Freedom of Religion
DEMOCRATS: Are silent on the right of Americans to live according to their beliefs outside their places of worship.
REPUBLICANS: Affirm the rights of conscience. They pledge to “protect religious freedom of military members”. They are committed to repeal the Johnson Amendment (which silenced churches from speaking on political issues).

Lives of Unborn Children
DEMOCRATS: Want to continue to force taxpayers to fund elective abortions. Their platform says, “We believe unequivocally that every woman should have access to… safe and legal abortion.” They also plan to repeal the Hyde Amendment, which forbids the use of certain federal funds to pay for abortion except to save the life of the mother, or if the pregnancy arises from incest or rape.
REPUBLICANS: “We strongly oppose infanticide.” “We oppose the use of public funds to perform or promote abortion.”  The Republican Party supports a human life amendment to the Constitution

The Sanctity of Marriage
DEMOCRATS: Embrace a redefinition of marriage. “LGBT people…have the right to marry the person they love.”
REPUBLICANS: “The American family is the foundation of civil society, and the cornerstone of the family is natural marriage.” They believe natural marriage is the union of one man and one woman.

The Supreme Court
DEMOCRATS: Have pledged to “Appoint judges who… protect a woman’s right to abortion…and see the Constitution as a blueprint for progress.” They will push an agenda in which LGBT rights supersede religious liberty.
REPUBLICANS: “Support judges who respect traditional family values and the sanctity of innocent human life.” Will enable courts to “reverse…” activist decisions like “Roe, Obergefell, and the Obamacare cases.”

Military Readiness and our National Defense
DEMOCRATS: Believe “our military is strongest” when it includes “people of all…sexual orientations and gender identities.” Have promised to include elective abortions in military and veterans benefits.
REPUBLICANS: Reject “the use of the military as a platform for social experimentation.” “Support  the religious freedom of all military members, especially chaplains.”

Fighting Terrorism
DEMOCRATS: Support “defeating terrorism and combating climate change.”
REPUBLICANS: “Radical Islamic Terrorism poses an existential threat to personal freedom and peace around the world.” “We oppose its brutal assault on all human beings, all of whom have inherent dignity.”

Spending and the National Budget
DEMOCRATS: Want to raise taxes and spend more to pay for “ambitious progressive” programs
REPUBLICANS: “The Federal Government spends too much…” and the National Debt is a burden on the economy and families. “We must impose firm caps on future debt.” We should “accelerate the repayment of the trillions we now owe.”

As you read through these comparisons of the party platforms, ask yourself, “What kind of America do I want to live in and raise my children in?” If your vision of America is that of Karl Marx and Vladimir Lenin – a Socialist “paradise” where the government takes care of you from cradle to grave and controls everything you do – the Democrat platform should give you great joy. Vote for every Democrat on the ticket on Tuesday.

But if your vision of America is that of the Founding Fathers – freedom, liberty, self-determination, and the ability to worship God in the way that you choose – the Republican Party is your home. Vote for Republicans unless the Lord has told you specifically to vote for a non-Republican candidate in a certain race.

Remember that no office is too small or insignificant to deserve your prayerful consideration. Today’s local official is tomorrow’s state-wide official. Serving on a school board or town council is how people get the experience and name recognition to run for the state legislature. By the same token, state officials are usually the “farm teams” from which national candidates are drawn.

No party is perfect – far from it. But the members of the two major parties stand for vastly different ideals and have greatly differing goals. In a nutshell, the Democrat party stands for government control of all aspects of life, and is generally hostile towards Christianity and the traditional family. The Republican Party stands for limited government, religious liberty – not just for Muslims, but for ALL religions – and has pledged to support God’s definition of marriage and to protect the most defenseless among us: the unborn.

The party a candidate belongs to MATTERS! On November 8, please remember that you’re not just voting for one person, but an entire agenda that will shape the future of America.

IMPORTANT NOTE: The research for this article was provided by General Jerry Boykin. It is part of the material he is presenting every night until Election Day on the Crying Out For America webinars and conference calls. These are being presented every evening (Thursday, Nov. 3 through Monday, Nov. 7 at 9PM Eastern Time). On these 30 minute calls General Boykin will lay out the serious needs of our nation with regard to the coming election, and Pastor Dix Winston will lead attendees from all over the nation in prayer.

Individuals, prayer groups and entire churches can join by online Webinar, or they can call in to a conference line. To register for the Webinar or get the call-in number, please visit the website: www.CryingOutForAmerica.com  For technical information on how a group can view the Webinar together, or to request a recording of any call you may have missed, write to Webinars @ Bellsouth.net.