The Terminator is Ready to Take Your Order 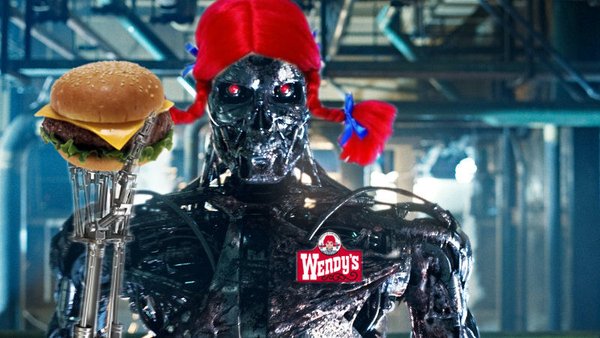 What will be the true effect of the $15.00 minimum wage throughout America? There is much discussion, with cities trying to convince news media, more jobs hired, but when we look at California, Oregon, and New York, we do not see any significant upward trend in jobs, but an actual loss of businesses as others pick-up the slack of competition. We can see this in the Restaurant business immensely.

Wendy’s is transitioning to all computer ordering, McDonalds is testing mechanical ordering, and Walmart has an infuse of complaints due to long term employees gaining no increase while new employees, without experience are getting paid equal pay.

I would rather a job at $10.00 per hour and guaranteed a job, than to demand and have placed into law a $15.00 minimum wage and lose my job, or find less jobs available. The outcome is not good, but is being played off as a great feat in helping the poverty stricken employees of businesses. Here is just a little information to compare and contrast the effects.

The nation’s second-largest city (Los Angeles) voted Tuesday to increase its minimum wage from $9 an hour to $15 an hour by 2020, in what is perhaps the most significant victory so far for labor groups and their allies who are engaged in a national push to raise the minimum wage.

The increase, which the City Council passed in a 14-to-1 vote, comes as workers across the country are rallying for higher wages and several large companies, including Facebook and Walmart, have moved to raise their lowest wages. Several other cities, including San Francisco, Chicago, Seattle and Oakland, Calif., have already approved increases, and dozens more are considering doing the same. In 2014, a number of Republican-leaning states like Alaska and South Dakota also raised their state-level minimum wages by ballot initiative.

The effect is likely to be particularly strong in Los Angeles, where, according to some estimates, almost 50 percent of the city’s work force earns less than $15 an hour. Under the plan approved Tuesday, the minimum wage will rise over five years.

The 67 percent increase from the current state minimum will be phased in over five years, first to $10.50 in July 2016, then to $12 in 2017, $13.25 in 2018 and $14.25 in 2019. Businesses with fewer than 25 employees will have an extra year to carry out the plan. Starting in 2022, annual increases will be based on the Consumer Price Index average of the last 20 years. The City Council’s vote will instruct the city attorney to draft the language of the law, which will then come back to the Council for final approval.

As the implementation date for Seattle’s strict $15 per hour minimum wage law approaches, the city is experiencing a rising trend in restaurant closures. The tough new law goes into effect April 1st. The closings have occurred across the city, from Grub in the upscale Queen Anne Hill neighborhood, to Little Uncle in gritty Pioneer Square, to the Boat Street Cafe on Western Avenue near the waterfront.

The shut-downs have idled dozens of low-wage workers, the very people advocates say the wage law is supposed to help. Instead of delivering the promised “living wage” of $15 an hour, economic realities created by the new law have dropped the hourly wage for these workers to zero.

Advocates of a high minimum wage said businesses would simply pay the mandated wage out of profits, raising earnings for workers. Restaurants operate on thin margins, though, with average profits of 4% or less, and the business is highly competitive.

“If you raise the minimum wage to $15 per hour, 55 million workers will see their wages affected—we looked at what happens after their wages are affected.”

The study also finds that increasing the minimum wage to $12 per hour would impact 38.3 million workers. 3.8 million Jobs would be lost and only 5.8% of income gained would go to workers in poverty.

A panel appointed by Gov. Andrew M. Cuomo recommended on Wednesday that the minimum wage be raised for employees of fast-food chain restaurants throughout the state to $15 an hour over the next few years. Wages would be raised faster in New York City than in the rest of the state to account for the higher cost of living there.

The panel’s recommendations, which are expected to be put into effect by an order of the state’s acting commissioner of labor, represent a major triumph for the advocates who have rallied burger-flippers and fry cooks to demand pay that covers their basic needs. They argued that taxpayers were subsidizing the workforces of some multinational corporations, like McDonald’s, that were not paying enough to keep their workers from relying on food stamps and other welfare benefits.

The $15 wage would represent a raise of more than 70 percent for workers earning the state’s current minimum wage of $8.75 an hour. Advocates for low-wage workers said they believed the mandate would quickly spur raises for employees in other industries across the state, and a jubilant Mr. Cuomo predicted that other states would follow his lead.

This is exactly what the left pushed for… Fast food chains were never meant to be a place for someone to raise a family of 6, they were to be part time positions with some full-time advancements. Mostly the fast food restaurants were for school aged kids to learn how to interact with people, with a job, to offer spending money, and to begin responsibility learning for their future.

Of course when this happens, like it did today in Los Angeles, the poor and unskilled workers will go on Welfare, and cost American workers more to support them.

McDonald’s recently came out with their answer to those that want $15/hr. pay.
Robots.

Rensi, who was head of McDonald’s in the mid-1990s and now runs a burger chain of his own, argued Tuesday that a $15 minimum wage would put 15 to 20 percent of small businesses out of business.

But it’s not just a higher minimum wage that’s threatening business owners, according to Rensi. “Obamacare is going to drop 15 to 20 percent of small businesses off the face of the earth,” he told Fox News.

Current McDonald’s CEO Don Thompson earlier this year disputed the idea that his company pays poverty-level wages, telling Bloomberg that the company has always been “an above minimum wage employer.”

Wendy’s is adding self-service kiosks at all of its more than 6,000 restaurants across the country. The automated ordering stations are expected to be in place before the end of the year. The cost-cutting move is reportedly being enacted in response to minimum wage hikes.

Yet for some of the hundreds of thousands of workers getting no raise, the policy is having the opposite effect.

In interviews and in hundreds of comments on Facebook, Wal-Mart employees are calling the move unfair to senior workers who got no increase and now make the same or close to what newer, less experienced colleagues earn. New workers started making a minimum of $9 an hour in April and will get at least $10 an hour in February.

“It is pitting people against each other,” said Charmaine Givens-Thomas, a 10-year Wal-Mart veteran. “It hurts morale when people feel like they aren’t being appreciated. I hear people every day talking about looking for other jobs and wanting to remove themselves from Wal-Mart and a job that will make them feel like that.”

The Walmart news comes on the heels of a Congressional Budget Office report that weighed the pros and cons of the possible wage increase. It could mean improved pay for more than 16 million Americans, but it could also result in the loss of upwards of 500,000 jobs.

But the Walmart rep says the math isn’t so cut and dry, and that consumer behavior isn’t always so predictable. He points to the retailer’s recent swing-and-miss on the issue of food stamps.

Walmart had predicted that cuts to that program in 2013 would have resulted in a sales bump for Walmart as shoppers looked for an affordable place to buy groceries, but that prediction didn’t pan out as expected.

Are you ready for a robot, or computer to take your order, or ring you out at the register? Are you ready to lose your career to be replaced by the same? This is not well thought out, the same as many of the programs that President Obama highlights and pushes upon businesses and local governments.