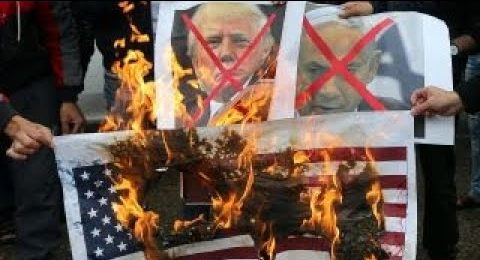 Yet another jihadi terror attack in NYC, but don’t blame Islam!  After years of praising Obama for importing Moslems, after decades of importing illegals, welcoming them into their homes, and making their citizens give up their jobs and provide for them, Democrats are reaping what they sow and blaming Trump for the problems of their own making.

If only Trump would submit to Islam like Obama then Islamo-Nazis wouldn’t be setting off bombs and running people down in the streets.  How sick, mentally ill, even psychotic is that kind of thinking?  President Trump has vowed to make America safe again, but Democrats have been fighting him to keep him from banning Moslems or closing the borders even a little bit.  Democrats call on all their people to RESIST!  What they are resisting is law and order, safety and prosperity.  They reject righteous Americanism in favor of the hateful bigotry of foreigners who hate America and want to steal from Americans as they do.  Then when Islamo-Nazis kill them they blame Trump for inciting them to violence because declaring three days of rage is unusual for Islam as if they are peaceful and loving for the last fourteen hundred years.  Jerusalem has been the capital of Israel and Israel has been the land of the Jews since God gave them that land fifteen centuries before Jesus was born.  Moslems, who were allied with Germany in WWI, lost that land as the British incited the Arab subjects of the Turkish Ottoman Empire to rebel.  Those same Arabs then allied with Hitler in WII and when they lost that war the British gave the Jews autonomy in their own homeland again.  Moslems declared Jihad and an Intifada against the West, but this is nothing new as Islam has been at war with the world since Muhammad brainwashed his followers and led them to conquer Mecca.  This “blame the victim and demand the return of Moslem controlled land” fraud has been going on ever since the Spanish ejected them from Spain and the Austro-Hungarians crushed their dreams of ever conquering Europe.  Now they have 21st century Nazi socialists inviting them into Europe and America to conquer through colonization.  The socialists of the West, who have been taxing their middle class families into extinction, need a new influx of subjects to be their serfs and Islamists are perfectly suited to serving the elites.  The ultimate socialist ideology of Islam, wherein the men are servants of the elites, women are servants of the men, and infidels are oppressed for not submitting to their authority, is perfect for the Nazi fascist communists of the Left.

I don’t feel sorry for New Yorkers, Californians, and Chicagoans who are the principle liberal fools that are inviting these thieves and murders into America and allow them to run freely on their streets.  I don’t feel sorry for them that their taxes are going up because their greedy, corrupt Democrat state governments are taking so much telling them it’s for their benefit to pay their fair share.  I’m glad Trump is ending the blue state welfare that Democrats put in place to make the rest of us pay for your corrupt governments.  Don’t you dare think of fleeing those states and dodging those taxes that you voted for!!!  Don’t you dare bring your leftist idiocy to red states where we smartly elect Republicans to keep taxes low and try to inflict your liberal stupidity on us!  Stay where you are!  The problem with socialists is they always want to live off of other people’s money.  Work for your own money and spend it more wisely.  If you want to give it to your Democrat masters don’t ask the rest of us to give you our money to cover your losses.  Be sanctuaries to foreigners who want to take your jobs and kill your children.  Arrest terrorists, give them citizen’s rights, and pay for their legal fees from your pockets.  Keep voting Democrat if that’s how you want to live!  But don’t expect the intelligent moral people of America to work with you, for you, or around you.  We will not accept those invaders into our states that you shield in yours.  Keep your thieves and murderers.  You think you are being compassionate welcoming refugees?  They’re so grateful that they’re demanding more benefits, demanding you submit to their demands, running you down in your streets and bombing you on your way to your jobs.  You think it was better having Obama as president?  America didn’t have Islamo-Nazi terrorists successfully operating in the U.S. until you gave a foreign bred Moslem power over this nation.  There is no excuse for the evils that New Yorkers and Californians and Democrats all over are inflicting on this nation.  There is no excuse for liberal stupidity or foolishness or the lies that you believe.  Keep your states the way you want them and be happy with what you have wrought.  You can treat terrorists like common criminals.  You can pay higher taxes.  You can watch your economy wilt as foreigners take away your wealth and your rights.  You can live with this as your “new normal” but we will not!  You made your bed now lay in it!

This concludes today’s rant against liberal stupidity.  As Forrest and Larry say, “Stupid is as stupid does” and “You can’t fix stupid.”  But we can vote it out of office.  Live as Democrat subjects to your rulers or join Republicans in rooting out Democrat/RINO corruption and drain the swamp in Washington.  Stop listening to only the leftist propaganda media.  All they do is warp your thinking and delude your mind.  Listen so you hear all the facts, learn morality, know the truth, and live righteously and free.  Democrats have ever been the party of slavery and oppression, while Republicans have always been the party of liberty.  Democrats have always taxed away wealth under the guise of sharing it when all they do is fill their pockets and help their friends.  Republicans have always been the party that gives people the freedom to keep their wealth while protecting them from criminals and conquerors.  Leftists have brainwashed liberal fools to dupe them into believing the opposite of the truth.  Intelligent people open their minds.  Don’t be slaves to leftist lies.  Believe none of what Democrats say and only half of what Republicans say because half of them work with Democrats rather than against them.  America has been in decline under Obama and only true American republicanism will save her.  That’s not fascist nationalism, that patriotic Americanism.  Do you even know the economy is improving markedly because of Trump?  Do you even know that taxes are going down and jobs are opening up because of Trump?  Do you even know that Islamic jihadis are being beaten back and America is becoming resurgent in the world because of Trump?  Or do you just know that football players are angry about cops shooting black criminals, that Moslems are angry about America recognizing Israel’s capital, or that Democrats say everyone is going to die?  America was not meant to be part of the world and live with them in multicultural chaos in thrall to leftist elitists, but to lead the world to freedom, and the Democrat media wants to make certain you know nothing except that America is evil unless you live under the Democrat’s boot.