Recent events only confirm a change we have seen develop over our lifetime as women increasingly moved out of the home and into the workplace.  The change is crystallizing in a way that makes analysis and quantification possible, which is not to say we can reduce it to mathematical certainty, but there is a likelihood our equations could be predictive.  To wit: 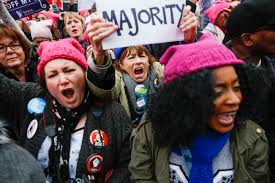 An astounding change and professions that had been 100% male dominated, science, engineering and medicine, were seeing increasing numbers of women.  And where these majors are ones with high dropout rates, on the order of 80%, the ladies have shown a great ability to “stick it out.”

While it is true today that women appear to be underrepresented in  Executive Suites that is changing and will be the statistic to watch to see if this trend has legs with high heels.  We suspect it will, but this will be good place to watch as mathematics alone has a mixed record in economics and is far less titillating.  Nonetheless…

Our mathematical projections say the last elected male representative in state or federal government will die in the 2060’s and that at some point in the 2070’s women will have most, if not all, judicial appointments, including the US Supreme Court!  They will occupy most, if not all, positions of power in our major corporations. We believe that no later than 2084 the “weaker sex” will be male for no reason other than women will be deemed smarter, more intuitive, more perceptive and more in control of impulses of the kind that have gotten us into so many wars.

In the home women will consider the issue men are poor at serving them sexually when they are “bringing home the bacon.”  They will object to the fact the typical male sex performance is only two minutes!  At some point they will discover distraction extends performance so they will have tiny TV screens built into bed headboards so men can watch football while performing marital functions.

Pray they never learn spanking also extends performance greatly or we will see the day when every master bedroom has a paddle wall hanging in a closet or on a wall and not as a college trophy, but an appliance in regular use.  Gentlemen, our world is changing and not for the better.