The newest stats show a soaring number of blacks murdered since the defund the police movement took hold in so many liberal cities.

Well, who could have predicted that, huh?

“Certainly, the protests and riots mid-2020 after the death of George Floyd followed a pattern of spiking violence that we’ve seen following past viral police incidents, such as the deaths of Michael Brown and Freddie Gray. This pattern has been termed the ‘Ferguson Effect’: police pull back while violent crime spikes precipitously,” Hannah Meyers, director of the policing and public safety initiative at the Manhattan Institute, told Fox News Digital.

Murders across the board spiked by nearly 30% in 2020 compared to the year prior, according to FBI data, marking the largest single-year increase in killings since the agency began tracking the crimes. Among Black Americans, the number of deaths spiked by more than 32% compared to 2019.

The number of Black murders was also far higher than White murders in 2020. The FBI data shows there 7,043 White people murdered that year, meaning 2,898 more Black people were killed compared to Whites.

The figures are more staggering considering White Americans make up 76% of the population compared to Black Americans representing only 13%, according to Census data.

Take a look at this: 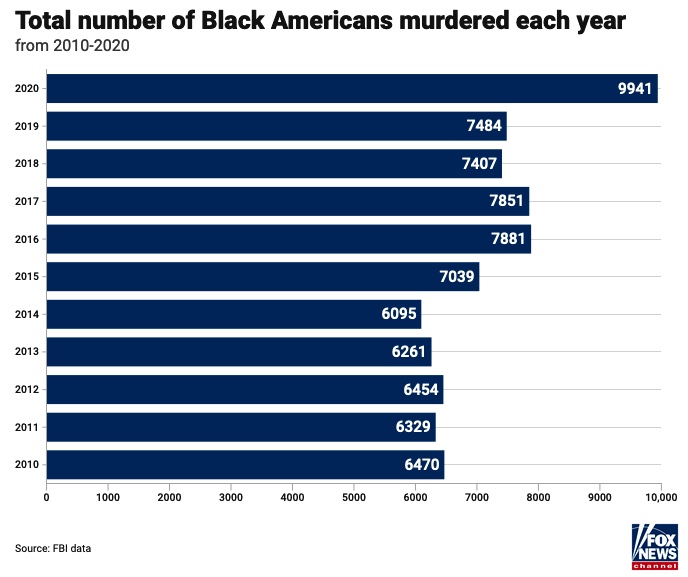 This is what liberals do to America. They destroy everything they touch and they are murderous for minorities.