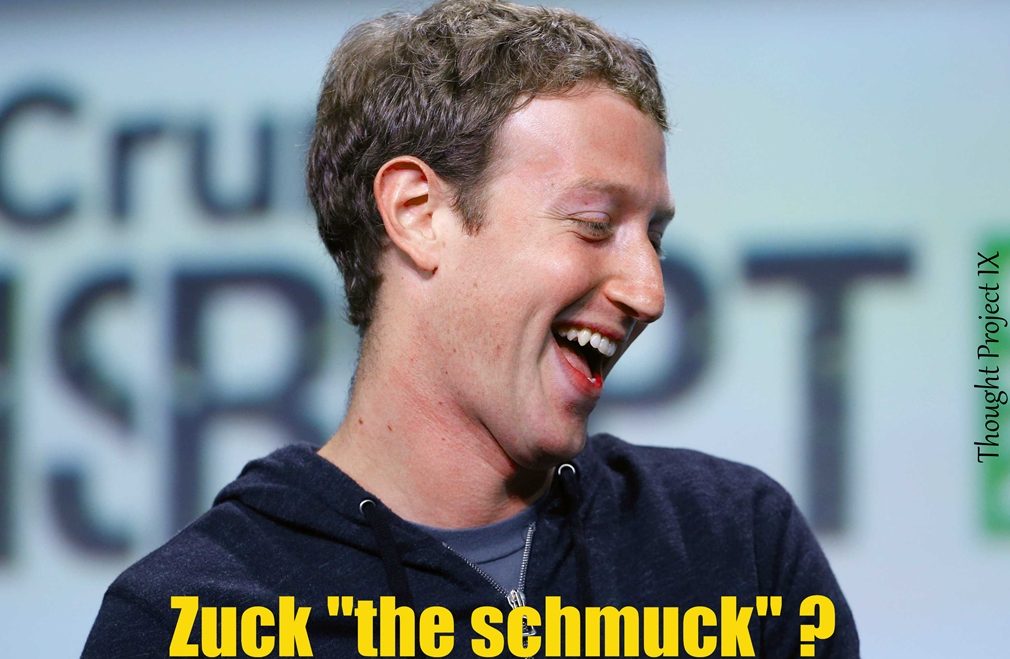 Many of my liberal friends, and many others, are really pissed at Mark Zuckerberg right now. I love it!

Got to drop some crumbs in their laps from the conservative side. I think one of the reasons they are so angry is that they are angry with themselves for being so open and trusting. They freely and willfully gave tons of personal information to someone that they did not know, but who presented themselves as a friend.

Zuck is dumping stock, share prices are crashing, and governments are wanting answers. So, what exactly is going on here? First we must clarify that there are three principals involved —Facebook, Aleksandr Kogan, a Russian born professor at Cambridge University https://en.wikipedia.org/wiki/Aleksandr_Kogan, and Cambridge Analytica, a British based data analysis company.

What started the furor is when it was found out that Kogan ran an app on facebook, with their permission and complying with Facebook’s policies to gather data. Kogan purported the information obtained through the app was to be used for educational purposes only, but sold the data to a third party, Cambridge Analytica, who did not have the “rights” to use the information. When Facebook found out about the sale, Cambridge Analytica assured them in writing that the personal data had been destroyed and had not been used in the research. This has been hotly disputed. This research was done for a contract with the Trump election campaign. Oh, Horrors! Because of that, just about every time Cambridge Analytica is mentioned by anyone it is described as Trump-affiliated.

But here’s the rub.

They were also contracted by the Clinton Campaign in her 2008 run against Obama, and currently have a contract with the U.S. Dept. of State, that I know of. Most insiders in the data crunching business say that Cambridge doesn’t have the “secret sauce” they claim to have. Much ado has been made of the political use of this by the Trump campaign as it is a perfect scapegoat for the Trump haters. There’s even a Russian in the picture!

Now here is where the fun begins. In his 2012 re-election bid, Obama ran an app with a very similar algorithm on Facebook to gather micro-data for the campaign. https://www.dailywire.com/…/flashback-maxine-waters-brags-a… When Facebook found this out, instead of disallowing it, they deliberately turned their faces away. A person involved in the data gathering and extraction process said that Facebook allowed them to do something they would not have allowed others to do because, “they were on our side.” So, you see, the clot thickens.

So, amid all the angry cries of, “Breach! Breach!”, there was in all likelihood no data breach here, just a breach of trust. People are starting to realize just what a surveillance state they live in, but the most ironic part is not what the government is doing (and they are doing it , for sure), but what the people are doing themselves. They drive cars with on-board computers equipped with GPS that can track and keep a record of their every movement. They carry cell phones with the same capabilities that can send their conversations into the ether for the NSA or whomever to capture. Their every purchase is recorded whenever they swipe (or chip) their credit/debit card or their Kroger (or Walgreens or whatever) card. They put “smart” gadgets in their homes that pick up even their most intimate conversations and are aided and abetted by their toaster, their microwave, and possibly even their washing machine. And they think we have privacy? No wonder Alexa is laughing at them.

Yes, Facebook is making a buck off of your favorite color and the dog you used to have. Is there wrongdoing here? Absolutely! Personally, I have no desire to see Facebook fail. I have invested over a year and a half developing this page, and I don’t want to lose it. It has given me an opportunity to dust off my journalism skills, a support group of sorts, and a renewed sense of purpose since my spouse has died. It can be a marvelous tool so let’s repair it. Even more egregious than Facebook’s sins is what is going on with twitter. Their use of Google run bots (that’s right, Google—not Russian) is atrocious. The censorship algorithms being run not only on Facebook, twitter, and Youtube, but most other social media need to be put to an end. https://petitions.whitehouse.gov/pet…/internet-bill-rights-2