The Yowdies, the Statue of Mary Tyler Moore, and the Beginning of the End 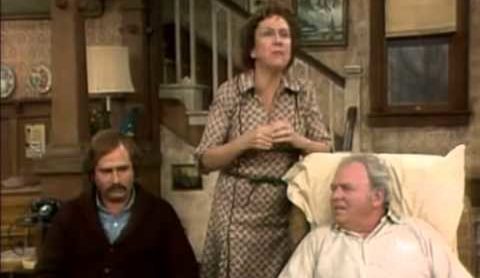 They were everywhere, polluting our culture with the strained and enforced “tolerance” which had come to be known as “political correctness.”  It started, more or less, in the late 60’s, and then a few years later we had TV monstrosities like All in the Family, which savagely ridiculed “old ” American values and suggested that all we needed to do was integrate ourselves more fully with members of other races, and all would be hunky-dory.  Militaristic feminists had succeeded in bringing their vile agenda to the American public, and TV shows were filled with inane dialogue such as: “I admire the integrity of my local policeman . . . er, sorry… police-person.”  And it only got worse and worse; I remember when a black family moved into the cul-de-sac on Knots Landing: totally useless characters who served no real function in the story except that they were BLACK.  After a number of years on the air, and focusing on exotic travels and a quaint New-England setting, Murder, She Wrote suddenly moved to New York City, where Jessica Fletcher would have a convenient excuse to solve murders among MINORITY communities — and on and on.  I stopped watching TV at around this time, not because I had any particular animosity towards other races but because I rejected the politicization of race.

It wasn’t until I went to a Far-Left grad school, however, that I came face-to-face with the most vehement adherents of political correctness, who I quickly nicknamed the “Yowdies” (because of the derisive sound of the word).  Once, I was in the cafeteria eating Corn Flakes for breakfast, and a snobbish white girl from Boston came up to me and said disdainfully: “I can’t believe you’re eating Corn Flakes!  That’s so stereo-typically American!”

“But I am American,” I shot back, “and I happen to like Corn Flakes.”

She scoffed and made her way toward the assembly of vegan-based slop that this cafeteria generally served, and from then on she never failed to flash me contemptuous looks whenever she saw me.  Her hatred of America was startling, but not at all uncommon among the Yowdies.  These were the people, after all, who were fighting to change the spelling of “woman” to “womyn,” as if to imply that a woman was an independent entity and did not come “from” a man.  “But as far as I know,” I quipped, “every woman has a mother and a father, right?  Women aren’t delivered by storks, right?”  But these humorless blubber-brains were incapable of laughing at themselves, so my biting wit had a very small audience in these parts.

Another time, I was speaking to a skinny-as-a-board homosexual punk with a green Mohawk and an inscrutable tattoo on his left arm.  He happened to be from Minneapolis, so I mentioned the commemorative statue of Mary Tyler Moore that had recently been erected in his hometown (in honor of her 70’s sitcom, which took place in Minneapolis).  “Yeah, I know,” he spat angrily, “that is so FASCIST!”

This was before I knew that it was a liberal tendency to call everything (and everyone) that offended them (and there is very little that doesn’t offend them) “fascist,” so naturally I asked: “How is a statue of a beloved 70’s sitcom star ‘fascist’?”

“Because it insinuates that only she deserves special attention and not everyone else,” was his idiotic response.

“But not everyone else was the star of a popular and groundbreaking 70’s sitcom,” I reasoned.  But it was impossible to reason with the Yowdies; they were staunch collectivists and hated everything that America stood for.  Afterwards, in a wrathful mood, I wrote a theatrical sketch based on this exchange, in which the statue of Mary Tyler Moore came to life and fled from the Yowdies.  She was finally cornered in an abandoned section of the city, but she bashed them with her hat until they bleed to death at her feet.  Then she dragged them into the center of the city, hung them upside-down on lampposts and watched as the crows poked out their eyes.  “I guess the statue of Mary isn’t quite as sweet as the character she played on television,” I giggled, half-wishing that my sketch would come true.

I met one of the Yowdies in his hometown of Berkeley, California, in between semesters: a tall, bearded Scotsman who was the son of ultra-liberal hippies.  He was driving through his neighborhood one night, and suddenly stopped and pointed to a particular house with such a look of accusatory contempt that I was startled.  “See that house over there?” he growled.  “A Republican family lives there!”

“So,” I shrugged, oblivious (at the time) to the savage enmity that had arisen during the two parties (partly as a result of the Bush Administration, partly as a result of long-simmering hatreds).  He just stared at me non-comprehendingly, as if he could not register how I could not be as inflamed by this as he was.  He tried to “correct” this apparent character flaw in me by espousing the standard liberal habits, attitudes, dogma, and even diet.  He constantly tried to convince me, for instance, to buy fresh produce from the local farmer’s market, speaking of it as if it were the Ninth Wonder of the World.  “What’s the big deal?” I finally replied.  “It’s just a bunch of people selling fruits and vegetables that they grew in their backyards.  It’s going to take a little more than that to solve the problems of the world.”  He never spoke to me again, and I comforted myself with the realization that his petty liberal tyranny was probably inherited from his hippie-parents (who, like most 70’s hippies, were now living in some nondescript suburb and driving an SUV).

Another of the Yowdies, a pale-faced white female with long and luxurious hair, chopped off her hair one summer and returned to campus looking deliberately disheveled and plain.  “Why did you chop off your beautiful hair?” I asked, alarmed by the change in her appearance.

“Because long hair is a gender stereotype,” she replied with a growl, as if this were a self-evident truth and I should not have even had to ask.

“That’s a bunch of feminist drivel,” I shot back tartly.  “If you want to chop off your hair, then go ahead and chop off your hair, but please don’t insult the rest of us by calling everything you don’t like a ‘stereotype’ . . . because that itself has become a stereotype.”

This exchange fractured our friendship, but we still took the bus back home — and en route we passed through a quaint New England town.  “What a lovely little town!” I exclaimed, always an admirer of quaintness and beauty.

“I’m from New England originally,” she said hatefully, “and I could never live here again.  It’s way too white.”

“But you’re white,” I pointed out.  I soon realized, however, that the Yowdies’ all-consuming obsession with “diversity,” as they liked to call it, was merely a superficial diversity, a racial diversity — certainly not a diversity of ideas, which is what the world desperately needs the most.  They were all so single-minded, and so utterly brainwashed by university-derived nonsense, that they were completely incapable of this; that was painfully apparent.

All of this took place in the mid-2000’s; since then, unfortunately, the Yowdies have only become more vociferous, more powerful, more numerous, raiding and ransacking every aspect of American culture with an alarming and remorseless savagery.  They have campaigned to remove “God” from the public discourse (even though at least half the country did not want this).  They have pushed the “gay” agenda to ludicrous extremes (even though many gay men themselves did not want this).  They have publicly humiliated those who dare to protest their sick agenda, even having people fired from their jobs.  They have even attacked Christmas, declaring that it was politically incorrect to say “Merry Christmas” in an increasingly multi-cultural society (which THEY have forced upon us).

But I am not the same person that I was a few years ago.  I have correctly identified political correctness as a monstrous form of brainwashing, censorship, and control, and liberalism itself as a severe mental disorder which has morphed into a collective psychosis.  As such, I combat the Yowdies with even more ferocity than they have displayed towards us.  I use words that they have forbidden, and I laugh when they chide me.  I speak the truth as I see it, making absolutely no concessions to their loathsome brainwashing methods.  I point out their blaring hypocrisies with lawyer-like precision, and laugh as they stand defenseless against the irrefutable truth.  And what I can do, others can do; intelligent, patriotic, strong-minded Americans must join forces and be 100% dedicated to fighting these worthless, pathetic human maggots.