You’re Fired: How Trump Can Re-Shape the Government 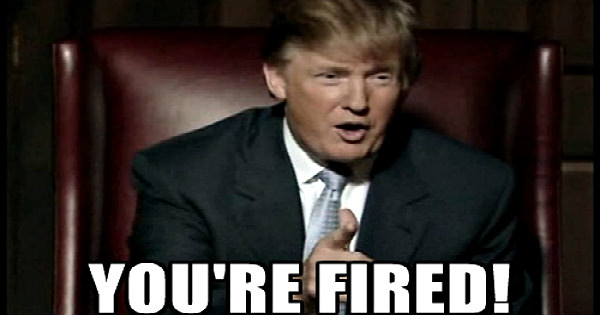 Well, maybe not quite like that, but it would fit in a tweet.  Besides, he told them it was effective January 20, 2017, and he told them on January 5th.  So, he followed recognized and acceptable professional standards and gave them two-week’s notice.

Plus, Mr. Trump flashed his first business acumen in a direction that neither requires nor allows any Congressional involvement.  World chaos?  Boom!  Stay calm everyone, we have a new sheriff in town.  Your new representative will be appointed soon.

Mr. Trump, if I may, a suggestion from one of my disciplines – project management.  When corporations or government entities grow to a certain size, they often implement what are called a “project management office” or PMO in the vernacular.  The definition of a PMO is as follows:

Perfect.  You might want to consider a PMO for the Office of the President that has a Scope of Work (SOW, also project management lingo) to remove all government functions not aligned with the enumerated powers of the federal government as stated in the Constitution of the United States.  For your immediate reference, they are itemized right HERE.

Yes, of course, some of them have changed, some have been expanded, and some are just down right un-Constitutional.  It would be part of the SOW to determine that Constitutionality.  It would also be the charter of the PMO to provide alternative plans for services now provided in Washington that should rightfully be provided by the states.  When that occurs, the PMO’s project for that agency would include a plan for smooth transition to the states.

Yes, sir, I know, a “YUGE” undertaking.  But, a man of your talent and connections could surely find a team of individuals capable of the task.  It would take quite some time from start to finish, so be sure it is constructed to prevent intervention with any annoying changing of guard that is so prevalent in Washington.

Good luck to you, sir, let me know what we can do to assist and thank you for your service,

P.S. – Please join the Doc Owen Show email list when you use the link in the signature.