You Need this Book; ‘AMERICA ON ITS KNEES: The Cost of Replacing Trump with Biden’ 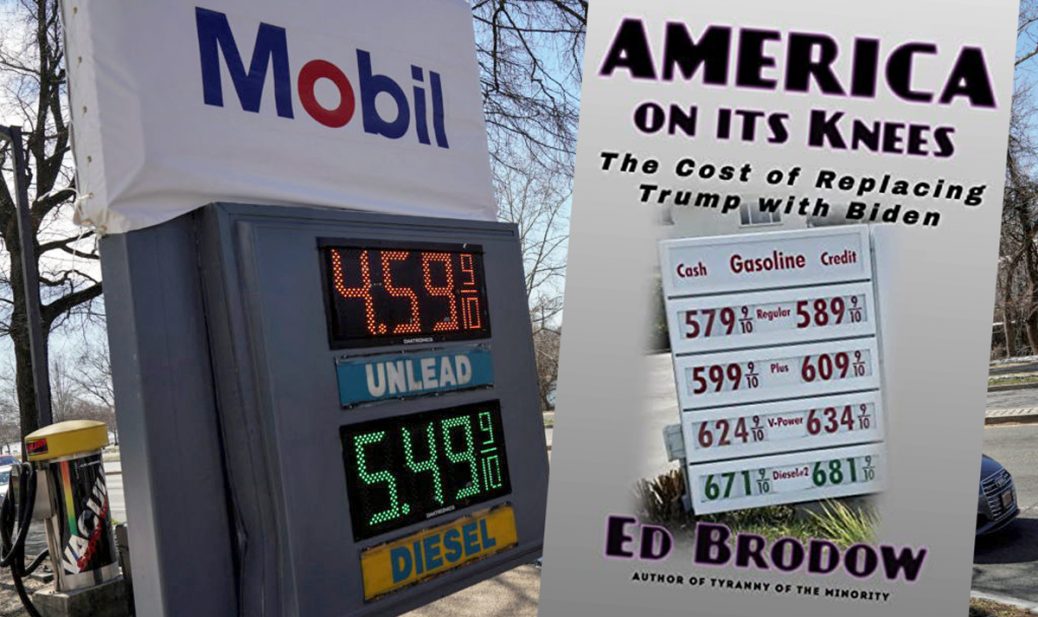 America On Its Knees describes the destruction of the United States of America after voters foolishly replaced Donald Trump with senile communist simp Joe Biden.

The book written by Ed Brodow takes readers on a blow-by-blow journey on how the U.S. has fallen since electing Joe Biden to the White House.

Brodow is 100% right, too. America has stumbled badly with the election of Joe Biden as his coterie of fanatical, anti-American, far-left barbarians have been allowed to wander through the gates.

Biden is at lightning speed undermining every aspect of America and Brodow details each area where this plot is unfolding.

The U.S. was in great shape in 2020. We were all better off during Donald Trump’s presidency. Then voters did the unexpected. They rejected the prosperity of the Trump years in favor of Joe Biden and the Democrats. Biden set out right away to reverse everything Trump accomplished.As a result, we are paying more in taxes, gas prices are going through the roof, inflation threatens to put millions of Americans in the poorhouse, and our streets are more dangerous than ever.

Unvetted illegal immigrants are being transported in secret to undisclosed locations around the country. Our nation is infected with cancel culture, censorship, and wokeness. Free speech is under attack by Facebook and other social media sites. White Americans are reviled by Critical Race Theory. If you dare to oppose Biden’s Marxist dictates, the Justice Department will label you a domestic terrorist.

The fake news media are not reporting on the subversive aim of the Democratic Party—transforming our country into an authoritarian socialist nation run by the unaccountable bureaucrats of the Deep State. As they exercise greater control over our lives, we can say goodbye to free speech, respect for the individual, the rule of law, and other fundamental American values.

“AMERICA ON ITS KNEES gives an accurate, thoughtful, and disturbing account of the dangers facing America under Biden and the Democrats.”
A.J. RICE—CEO of Publius PR and bestselling author of The Woking Dead

“Brodow makes the case for why the Biden administration, political leftists, and the ‘Woke’ can’t make things better.”
TIM TAPP—Tapp into the Truth, iHeartRadio

“America on its Knees makes a compelling case for all that we, as a nation, lost in the 2020 election. What makes it stand out is Brodow’s crisp and often biting writing style. Brodow’s text is not just well organized, it is cynical in all the right places, sardonic when it is right, snarky when you need it to be, and even sarcastically funny at times. Knees is well researched, with dozens of quotes from reliable sources to back up the author’s insights and views. The Democrats, he says, have become a party that relies on brute violence to coerce and intimidate their enemies—which just happens to be roughly half of the country.”
BLAINE L. PARDOE—American Thinker

Buy your copy of AMERICA ON ITS KNEES: The Cost of Replacing Trump with Biden now! It’s great summer reading.

7 Out Of 10 Americans DO NOT Want A Second Biden Term According To New Poll
July 3rd, 2022 Clash Daily