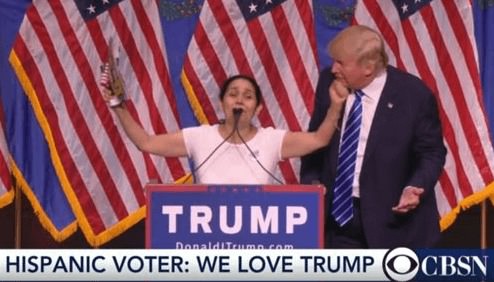 Can Trump win the “Hispanic vote”, well, if you have faith, like I do, in the common sense of the American electorate, the answer is a resounding YES!

Let us to count the ways:

Trump knows the enemy by name, something the libs seem to choke on.

Trump realizes that many Americans of Hispanic origin, like him, are offended when a foreign battle flag is raised in our nation or foreign agents attach our homeland.

Trump assesses correctly that, like him, Americans of Hispanic origin, do not behold to foreign governments, even if it be their motherland.

Trump honors our veterans, both living and those who fell on the fields of glory. Americans of Mexican origin retain military honors second only to the Native American per population. Like Native Americans we see the defense of our homeland not just a duty, but an honor.  We honor those who fought and especially those who died for our freedom,

Trump does not believe in rewarding criminals and neither do we.

Trump believes in protecting the unborn, Hispanic have among the lowest rate of killing our babies.

Trump believes in protecting those whose faith is in Jesus, Hispanics are among the largest demographics of attending churches who profess Jesus as Lord.

Trump believes that those who choose to deviate in their sexual behavior should not be given special rewards for doing so.   Hispanics, while tolerant of such behavior, do not believe in special rights for sexual deviants, and in the cases of adults influencing and taking advantage of adolescents (salutatory rape)  support prison sentences.

Trump is actually a maverick of partisan politics, Hispanics do not believe in being in the pocket of any one party, and their vote is up for grabs, Reagan did extremely well among this group.

Democrats attract with their give away free stuff message, Hispanics have been burned way too many times with this sales job.

One definition of a conservative: a liberal who was mugged once too many times! This is the Hispanic, the victim of poverty pimps, selling the poverty of the Hispanic community, and whose vested interest is to keep them in poverty.