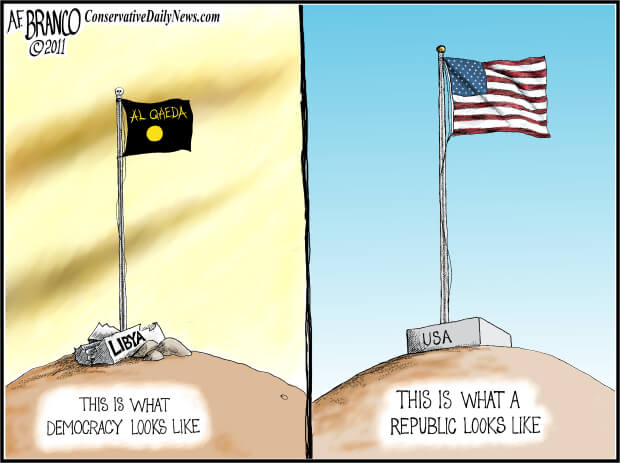 The leftist website Vox.com posted an article yesterday entitled, “How democracies die, explained.” Of course it has to do with the president, but they add that, “The problems in American democracy run far deeper than Trump.” Well bully for them. Dilly Dilly!

Now right off the bat, we should notice a glaring error. It may stem from calculation or ignorance. In case you missed it, America is not a democracy. However those of leftist persuasion often refer to the United States as one. We are of course a representative republic.

To the ignorant, those who have not been taught the difference, this is understandable. Being ignorant is simply lacking knowledge. No matter how well educated one is, he or she will always be ignorant of something. There are no exceptions. Okay one. God knows everything.

However, knowing the difference and deliberately misleading the ignorant is a different story. This, for want of better term, is malicious.

The article’s author, Javier Zarracina, explains that in days gone by, democracies would fall “in coups and revolutions, burn in fires and riots, collapse amid war and plague. When they die, they die screaming.”

But the authors he interviewed, Steven Levitsky and Daniel Ziblatt, explain in their new book, “How Democracies Die,” that modern democracies, “erode slowly, in barely visible steps.” They rot from the inside, poisoned by leaders who “subvert the very process that brought them to power.”

I read Zarracina’s entire, and incredibly lengthy article. Not once did he or the book’s esteemed authors’ mention the word republic. Reading the post, I concluded that none of the three appears to be ignorant. They are all educated, and as such must have at least been exposed to republicanism and how it differs from a democracy. Yet there is not single mention. Therefore the only conclusion which can be drawn is that they are maliciously attempting to blur the lines, to inspire a revolution of sorts against a system of governance that does not exist in the United States. And, of course, a personal referendum against Trump, whom they viscerally hate. 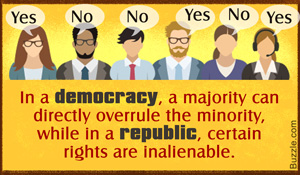 The nature of a democracy is devoid of checks and balances. It is why all democracies eventually succumb to the tyranny of the majority. Levitsky and Ziblatt conclude that, “The genius of modern tyrants has been in realizing you don’t need to dislodge democracy; you need to co-opt it, you need to make it your own.” And they’re right.

Our founders, who were learned students of political history, also knew this.

It is why they set up a unique system of deliberate checks and balances, represented by three separate but equal branches.

It is also why the founders fashioned the Electoral College, to prevent such majoritarian tyranny. Through republicanism, the minority will always maintain a voice in governance, and why the left seeks to undermine it.

Unlike a republic, a democracy allows for the temporary passions of the public to overrun reason and directly affect laws. It is the job of the “modern tyrants,” or democrats if you will, to foment this passion. A republic prevents this, as elected representatives of the people must deliberate before enacting laws. This allows for a de facto “cooling off” period, allowing passions to subside. Good law can never be derived from unchecked emotion.

I would love to think better of these three men, but reading what they wrote and knowing the underlying message of Vox, I cannot. They know exactly what they are doing, as do democrat politicians. All, save a few of the dimmest democrat bulbs on Capital Hill, know the difference between the two forms of government. Yet all repeatedly attempt to use the two synonymously, in an ongoing effort to shift the public from the safety and security of republicanism to the Wild West of democracy.