Worst Presidents of the Last 100 Years 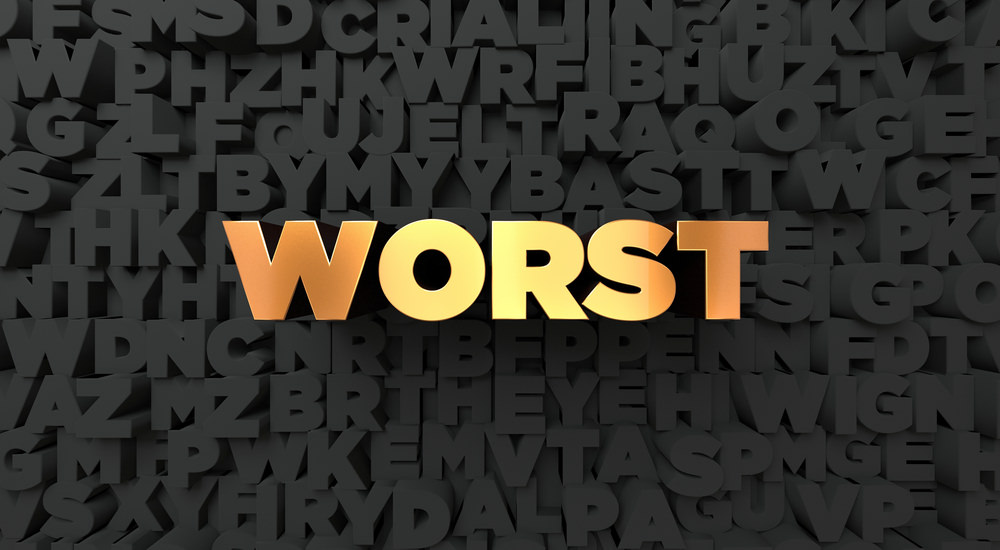 On the eve of Presidents Day and in the middle of income tax season, it seems fitting to identify the president who started this nightmare, as well as the subsequent presidents and their own various nightmares. In chronological order, the five worst recent presidents are:

Wilson gave us the dreaded income tax code. He also gave us the Federal Reserve Board. This is the organization that observed a recession similar to the ones that annoyed us in 1906, 1965, and 2000. They made the wrong decisions and turned that recession into the Great Depression.

Philosophically, Wilson gave us the concept of the Living Constitution. In his mind, the constitution is whatever society wants it to be. What exactly is that? Nobody knows. This means that you do not get to know what the law is until the moment when the judge sentences you.

In addition to the damage done by the Federal Reserve Board, Roosevelt put the Great in the Great Depression. He also started the Social Security Ponzi scheme that plagues us today, 80 years later.

Johnson prosecuted a war so incompetently that he caused 58,000 American soldiers to die. He also started an enormous amount of government spending under the dubious name Great Society. It caused disincentives to work as well as to get married before having children. The result was so many illegitimate children that people dare not use the word bastard because it describes so many people. Johnson started several cabinet level departments that just will not go away 50 years later. He gave us many ticking time bombs.

Like many presidents, Carter wanted to solve a problem and made it worse. He noticed that college tuition was too high for people without summer jobs to afford. He instituted a lending program that made it easier for students to get long term loans. Students were then able, and unfortunately willing, to borrow enormous amounts of money and send the money to the college of their choice. Naturally, the colleges raised their prices. Now, these former students have college degrees that cannot help them find jobs and hundreds of thousands of dollars in debt.

Carter saw that scientists were working on fast breeder nuclear reactors. These reactors recycle their fuel rods several times. They produce more energy and far less nuclear waste. The way that Carter saw these reactors is that the waste can be used to make nuclear bombs. Carter, apparently contemptuous of Americans, did not trust such waste in our hands, so he put a stop to this avenue of research. Now, we have too much nuclear waste and former Senator Harry Reid prevented a nuclear waste storage facility from being built. Ultimately, we will need to solve this problem by shutting down our nuclear power plants. Coal fired power plants were attacked by the next president on this list. This shows how multiple bad presidents can cause far more damage than either one of them alone.

Philosophically, Carter was such a wimp that he garnered no respect. Carter summed up the resulting mood of the nation with the expression “National Malaise.” At the time of his National Malaise speech, his wimpiest days were ahead of him (see Iran Hostage Crisis).

With every decision Obama made, the country was worse off. Some examples are:

Obama increased government spending by about $1 trillion per year to stimulate the economy, but it only caused more debt.

Obama made several decisions to minimize production of oil and coal. He also subsidized non-productive energy alternatives, such as solar, wind, and grass. The result is the minimization of domestic energy production.

Obama introduced a new health care system that would have led to fewer people being insured, people waiting longer to see their doctors, and higher health care prices all around. The VA scandal involving thousands of deaths could have been the shape of things to come.

Obama dealt with a high unemployment rate by encouraging the unemployed to stop looking for work. They are either on welfare or disability. The number of unemployed is now lower, but so is the number of employed.

Obama cut the Defense Department budget, put openly gays in the military, put women in combat positions, minimized the number of bullets that the soldiers may have, and maintained that soldiers must be unarmed while stateside. All of these decisions conspired to make us unprepared for our terrorist enemies.

Philosophically, Obama sent the message that there is no such thing as American Exceptionalism. He appeared to be trying to turn this belief into reality.

I cannot remember a single decision that Obama made that made the country better off. He clearly belongs on this list.

So that this article will not be totally negative, let us remember some of the recent presidents who were very praiseworthy:

Calvin Coolidge, who kept his mouth shut and allowed the country to prosper. He showed that they govern best who govern least.

Dwight Eisenhower, who gave us our highway system.

Ronald Reagan, who saved our economy from Jimmy Carter’s mistakes and defeated the Soviet Union without firing a shot.

Exceptions to the Rule

So far, I have vilified Democrats and praised Republicans. So that this article will not be totally one sided, here are a few counter-examples:

Democrat John Kennedy gave us a supply side tax cut that lifted the economy.

Republican Richard Nixon’s paranoia led to his seeing enemies everywhere and using the IRS and other government institutions to get revenge on some Americans.

There are good and bad in every president, but we should use the above examples to identify the best people and choose them to be our future presidents.