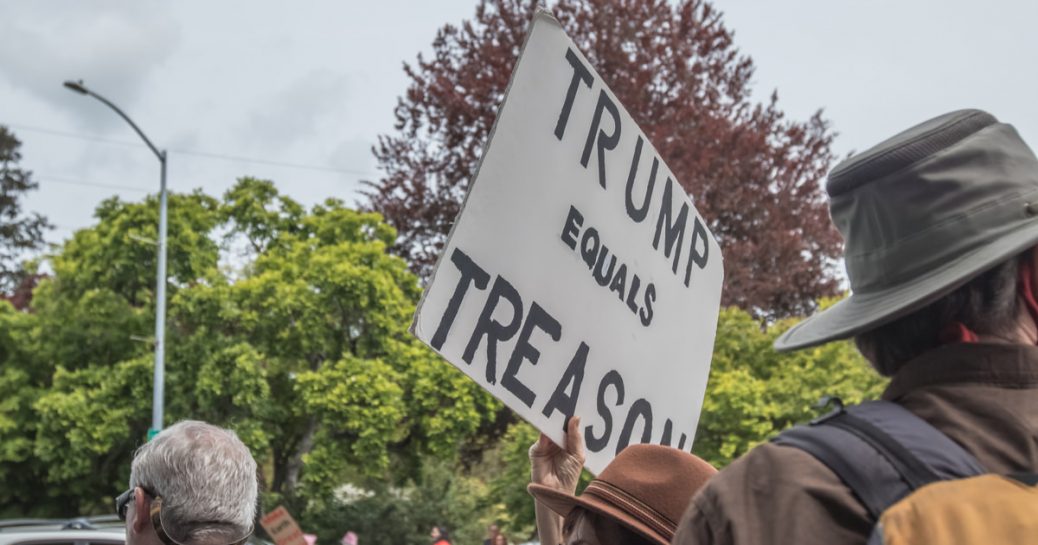 In the wake of the revelations about Donald Trump Jr.’s meeting with a Russian lawyer, the already unhinged promoters of the RussiaGate ruse are amping their rhetoric up even further, if that is even possible. I am frequently seeing the charge of “treason” and “traitor” casually tossed around. The problem for the RussiaGate hysterics is that treason has a precise definition in the U.S. Constitution, and neither Don Jr. nor anyone else associated with this come anywhere close to meeting it.

The Constitution specifically defines treason. The Framers did this in order to avoid the abuse of the charge that they considered too prevalent under the Crown. (Perhaps anti-Trumpers should consider what company they are placing themselves in with their reckless rhetoric.) According to the Article III, Section 3 treason is defined as:

Treason against the United States shall consist only in levying war against them, or in adhering to their enemies, giving them aid and comfort. No person shall be convicted of treason unless on the testimony of two witnesses to the same overt act, or on confession in open Court. The Congress shall have power to declare the punishment of treason.

Words have meanings, and if we are going to attempt to have a civil discourse in this country about our political differences, these meanings should be respected and loaded words should not be used as casual slurs. (It is likely given the current manifestations of the left and the Democrat Party too much credit to assume they actually want a civil debate, but bear with me for the sake of the argument.) I say this not just about treason which has a precise definition but also terms like Nazi and (F)fascist, which the left also tosses around casually as slurs, despite these words having real meanings and historical contexts that make their use in the modern American political scene almost always inaccurate. And for the record, I also counsel my fellow rightists against the casual use of the word (C)communist which accurately applies to very few people in the modern American political milieu.

With regard to treason, for starters, there is a debate about whether the charge requires a declared enemy, which, as I pointed out in my last essay, America has none. Historical precedent would suggest that at least for the first clause, levying war, it does not, as the treason case against Aaron Burr illustrates. But with regard to the second clause, adhering to their enemies and giving them aid and comfort, it is arguable that an actual declared enemy is necessary. It is perhaps illustrative that the Rosenbergs, for example, were charged with espionage and not Article III treason during a time when the U.S. and the Soviet Union were not on friendly terms, but the USSR was not an official declared enemy. Since the necessity of a declared enemy is not in the Constitution’s text per se, I find it ironic that a lot of anti-Trumpers who are arguing that treason is a justified charge here have suddenly become strict textualists. Liberals are certainly not textualists when they are scouring the penumbra for this or that right. (Thanks to Dr. Kevin Gutzman for his help with this issue.)

There is a debate about whether, even if the RussiaGater’s spin on the event is true, Don Jr. even broke any law at all. Do the anti-Trump hysterics really want to go to the mat over an issue where one credible interpretation is that no law was even broken and the other end is that he is guilty of a capital offense? This sort of absurd escalation just makes them look silly. And then they wonder why Americans are growing tired of the liberal media’s constant Russia obsession.

Are there really any RussiaGate conspiracy theorists who actually believe some prosecutor will bring a charge of treason against Don Jr.? If so, do you want to place a little wager on it? Since I seriously doubt I will have many takers, casually tossing around the charge of treason is not credible legally speaking. It is simply a slur that is poisoning the debate. You would think that liberals of all people, if that term has any real meaning in America anymore, would be sensitive to the use of such charges to quash dissent.

It is clear that the RussiaGate conspiracists are not truly motivated by a genuine concern over foreign interference in our election. They are just anti-Trump. It is known that Britain, Estonia, and Ukraine attempted to aid the Hillary campaign with dirt on Trump. Where is the similar outrage about this? Anti-Trumpers paid a former (?) British spy to compile a dossier against Trump collected from foreign sources. Far from decrying this in the same way they are the alleged Trump Russia connection, by and large the same crowd that is hyping the Russian conspiracy were giddy with excitement about the potential contents of the dossier. So please spare me your feigned concerns about foreign interference. Your real concern is and always has been that your insider candidate was beaten by an outsider political novice, and you can’t get over it.