Wolff at the Door-Amateurish Book on Trump Tries But Fails 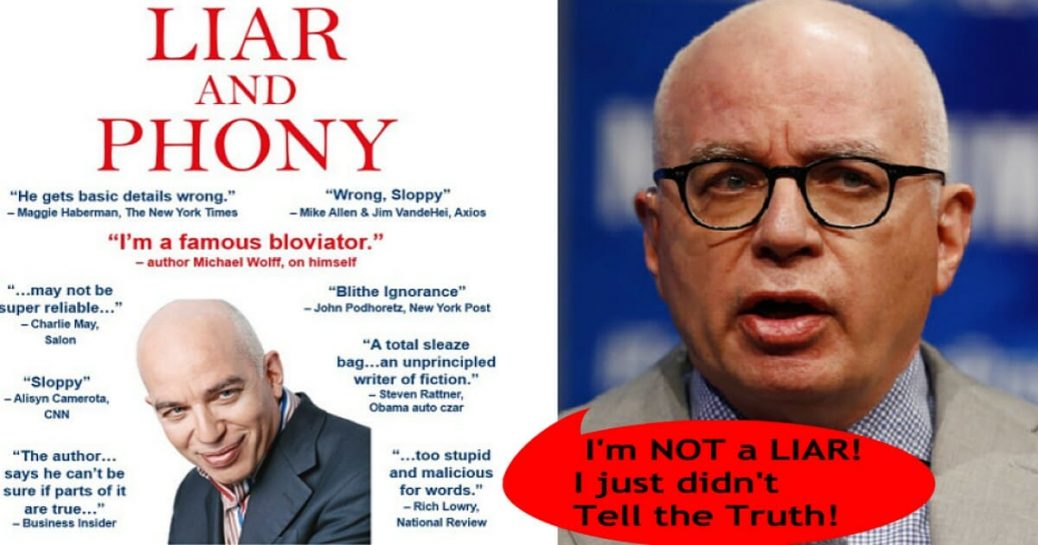 This dreadful new book, Fire and Fury by Michael Wolff, was not released–it escaped!  The author bragged that this book would “bring down Trump!”

With that goal, especially targeting a legally elected president who has, in his first year, kept every promise he made on the campaign trail, this project would, of necessity invite lies and and misrepresentation with sleazy bogus accusations against President Donald Trump who received over 62  million  votes (62,972,226) and 306 Electoral College votes (Hillary go only 232) sweeping him into the White House.

The Democrat-Communists who lost the majority vote and the Electoral College votes, intend to snatch and grab the government with violence, which they have already demonstrated in their protests which caused numerous injuries and property damage.

They are being financed and led by Communist George Soros and Obama who stayed in D.C. with a house within five minutes of the Oval Office. No other past “president has done this, nor was this arrogant.

And isn’t thee a legal precedent to prosecute anyone who attempts to “bring down” a sitting president and overthrowing a government? You bet there is.

I did NOT buy a copy of this damnable book but was able to read it on wiki leaks, that had it up long enough for me to see it just in time. That has now been scrubbed. So I saved 20 bucks and still got the info desired.

First of all, Wolff is not a skilled writer, in other words his scribbling is not considered literature. He writes like a tabloid exploitation writer which is NOT literature. Based upon his writing, it is doubted that he ever went to Journalism School or took any classes in writing. He types from the hip for destruction.

The manufactured-content book was first out of the gate this week with long lines at the book stores. People were packed in as books literally flew out of stores. This emboldened the Democrat Communists, determined to take down Trump so they can turn America into a dictatorship Communist country.

Because so many Christians live in the U.S., it is the only country standing in the way of the New (Communist) One World Order. Why? Because a true Christian’s mind cannot be enslaved. This is why they want to abolish Christianity and the church.

These dumb evil people do not realize that as they try to forcefully take over our government, that they will have 62, 972,226 people who voted Trump in, which is a majority even though Hillary falsely claimed that she had more of the Popular vote. We smell the burning of pants.

Trump supporters are highly angered over anything the Communists employ to hurt our president and these supporters will come against the Commie Dems, using whatever force is needed to prevent harm to our president.

The Wolff author has created a full volume of lies, innuendos and speculations to (hopefully) take down a peoples’ choice president, who will not bow to the horrors of Communism–Thank God!

The Constitution of the United States guarantees this right of the people to freely choose those who would become their president. Otherwise, America would quickly become a 3rd World dictatorship where only the dissidents have guns. The actual Americans would be unable to defend themselves, their families and their country We cannot allow that to happen.

I remember when young (yes I WAS young once) that frequently someone just installed as President-Leader in a 3rd World Country, would be shot and killed while giving  his inauguration speech, which was always shown on TV.

The most favorable review found on this book of trash stated: “Readable but disjointed and choppy.” Some comments in this “disjointed” book states that President Trump is an “overly emotional man,” “insecure” “has phobias,” “grievances” and “is a delusional man.” Yep, the ‘author’ has him all figured out even though they never formed a relationship.

Thus the phony descriptions given to our president, by a man he has never actually sat down with, even though so-called author  Michael Wolff admits that he briefly shook hands with Trump during a campaign rally. This is far short of “sitting down with him for an interview.” Residue of a Bull! So Wolff is absolutely lying

Wolff acknowledged that not everything is true in his “book.” Maybe 10% is true,” he admitted, which stimulated a response from a liberal–yes a LIBERAL to post,” “Even at 10% true–HOLY CRAP!”

Many of the names he quotes do not even exist. This can only be called a “creative” work since all of it is indeed created. For example; Did the editor of Vogue ask President Trump to appoint her for an Ambassador Post? Yep, the president told Wolff that this took place, according to Wolff.

As for the Vogue Editor, her response  to this lunacy was: “Laughably preposterous.”  Plus President Trump NEVER sat down with her or even talked to her. The same with Michael Wolff, the Wolff Democrat-Communist Fraud.

This book will readily appeal to certain customers of non-literary fiction by an exposed liar with a book filled with lies. How dare this scribbler tell such lies to hurt our president.

And how dare the many psychologists and psychiatrists  state publicly that Trump has mental issues. They are complicit in the harm being launched against the President of the United States. According to the rules of their profession, they can and should be stripped of their license for this.

Apparently they do not know that a psychiatrist, counselor or psychologist absolutely cannot and must not diagnose anyone without first fully examining them. So those who made these claims about President Trump without first examining him can and and should have their licences revoked. So conservative District Attorneys, we need you. Come and help us.

Yes, the book is selling zillions of copies, well, at least about 62 million Democrat Communists are grabbing it up. Doesn’t matter that it is full of lies (even the author admits this) , only that something negative about President Donald Trump is being circulated widely.

To spend over 20 bucks to read about someone they hate is crazy. Those who get excited over UNTRUE accusation and characterizations would not be good marriage material.

He and his publisher, Henry Holt & Company, should hang their heads in shame. And they have deeply offended 62 million, nine hundred and seventy two thousand,  two hundred and twenty six Trump supporters, including this writer that you will have to deal with as we protect our president with force.

Here is an excellent opinion by an expert: “It is a tale told by an idiot, full of sound and fury which signifies nothing.”  William Shakespeare.

Don’t waste your time and money on this fraudulent book. It was impossible to cover everything in it which would have resulted in an encyclopedia. This is a column with space restriction. My report is still complete and gives you an idea of the phoniness of that book which is a POLITICAL SCAM.

Please share this on your blogs, emails and social media.