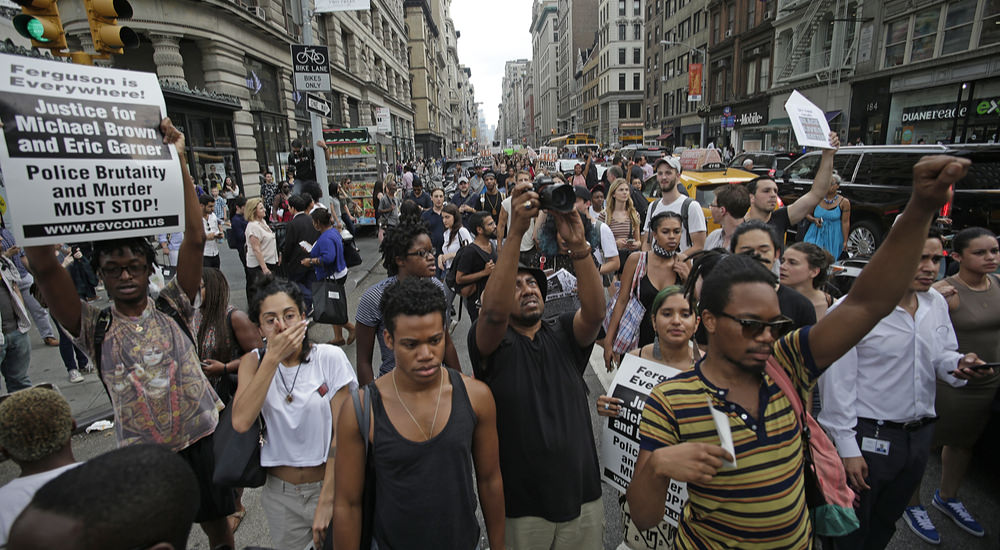 It almost seems like a broken record, reporting and commenting on the death of college free speech. If there weren’t so darn many examples of bias and outright animosity toward free speech on college campuses, it would easier to ignore.

Douglas Muir is a rather unassuming restaurant owner and engineering professor at the University of Virginia. However, he made the critical mistake of posting a comment, “responding to a Facebook post that included a photograph of a recent appearance by BLM co-founder Alicia Garza in Charlottesville.” Garza was speaking at a nearby theater on “Rooting Out Injustice…”

Anyone who is familiar with Garza knows she is a leftist radical and professional race-hustler. Evidently Professor Muir is acquainted with the work of Garza, as he posted that, “Black Lives Matter is biggest racist organization since the Klan. Are you kidding me. Disgusting!!!”

Of course he is correct, but on college campuses today, being right is as good as being white – and completely immaterial. Phony calls for diversity and inclusion (of all who agree) are the only things that matter, and will be the only things considered.

For stating his opinion, Professor Muir is paying a steep price. In no time flat his University threw him under the bus, stating: “A recent comment regarding the Black Lives Matter movement, posted on social media by Doug Muir, a lecturer in our school, has raised serious concerns about UVA Engineering’s commitment to diversity, inclusion and support of populations that are traditionally underrepresented in science, technology, engineering and mathematics.”

Yes, let us not concern ourselves with teaching engineering and math. Let us instead make a “commitment to diversity and inclusion.” That will keep America competitive with the rest of the world.

The school added that, “Our faculty and staff are responsible for upholding our values and demonstrating them to students and the community. Mr. Muir has agreed to take leave and is preparing his own statement to the community.” I’ll bet he did. I wonder what the alternative was – firing squad?

There have been calls for Muir to be fired and the Mayor of Charlottesville – yes the Mayor – called for a boycott of Muir’s restaurant. “The notion that #BlackLivesMatter can be comparable to the Ku Klux Klan is not only incredibly misguided, but goes

to show the lack of cultural awareness that still plagues many professors at our Universities across the country,” the mayor wrote on his Instagram account.

Who is misguided Mr. Mayor? I think you are. Shall I share with you just few of the recent inclusive events involving BLM? Here ya go! They may sound a lot the Klan.

Want another? A video in August from Milwaukee shows BLM rioters chanting “black power!” before asking “is they white?” as cars slowly drive past. “Yeah they white!” states someone else, prompting the mob to run towards the vehicle. “Yeah they white, get their ass!” screams another. “Hey they beatin’ up every white person!” exclaims another rioter. “He white – beat his head – bitch!” he adds. The video shows the mob attacking cars and trying to drag out the drivers.

Thank you sir – may I have another? You got it.

Just one more – then I’ll stop. Again in September, two girls were exiting a Red Robin restaurant in Stockton, Ca. when they were attacked – you guessed it – by an angry mob of BLM jackasses. And evidently these thugs were brought in from out of town, as BLM most always does, to help frenzy things up.

Sorry, but I’m on a roll – one more. Just a few days ago, a 17yr old White Alabama high school kid was beaten almost to death by Black Lives Matter thugs. His skull was broken in three places and he remains in Intensive Care.

All one would have to is replace BLM with KKK in each of these incidences, and the University and the Mayor would be singing a different tune. But I suppose its okay to sacrifice a few white lives for the sake of “diversity and inclusion.”