Will Third Parties Win in November? 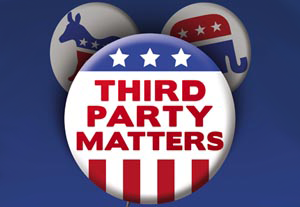 In a vacuum of serious policy decisions and debates, minor parties can be effective catalysts for issues that are eventually absorbed by the major parties. In his book The Other Candidates: Third Parties in General Elections, author Frank Smallwood observed that alternative political candidates, “have often been successful in advancing initiatives that have later been incorporated into our political life. Even on those occasions where their ideas have been rejected, third parties have acted as a sounding board by providing a forum for discussion and debate.”

A wide range of pundits have expressed their frustrations with the bipartisan choke hold on competition. New York Times writer Micah Sifry describes the two party monopoly as “a peculiar and long-lasting arrangement that has stifled political competition from other forces for more than a century.”

Conservative commentator Lou Dobbs asserts, “I can’t take seriously anyone who takes the Republican or Democratic Party seriously – both are bought and paid for by Corporate America and special interests.” And from the left, Ralph Nader maintains, “as the Republican and Democratic parties take more money from the same sources, they morph into one corporate party with two heads.”

Third parties have shouted truth to the ruling duopoly with some success. The Socialist Party first advocated laws establishing minimum ages and limiting hours of work for children in 1904. The Keating-Owen Act established such regulations in 1916. The Prohibition Party promoted women’s suffrage during the late 1800s and by 1916 both Republicans and Democrats supported it.

The Colorado Libertarian Party had elected a mayor, two city council members, and a sheriff before passage of the successful referendum to decriminalize the use of marijuana in that state.

Seattle was one of the first big cities to pass a $15 minimum wage law in 2015. City councilor Kshama Sawant of the Socialist Alternative Party was elected in 2013 in large part by advocating a $15 minimum wage.

According to a Gallup poll last month, 57 percent of voters say a third major party is needed. A Fox News survey revealed that 55 percent of voters have an unfavorable view of Hillary Clinton and 63 percent have a negative impression of Donald Trump. Come November, those numbers will intersect. The candidates and platforms of the Libertarians, Greens, Legal Marijuana Now, Socialist, and a dozen other third parties will test the mettle of the power elites.

I humbly predict third party candidates, especially for down ballot offices, and their similar views on interventionist foreign policies, Wall Street bailouts, military spending, auditing the Federal Reserve, and more will give the political ruling class a bloody nose.

If so, James Madison will be pleased. He wisely advised future generations of voters that, “When the variety and number of political parties increases, the chance for oppression, factionalism, and non-skeptical acceptance of ideas decreases.”