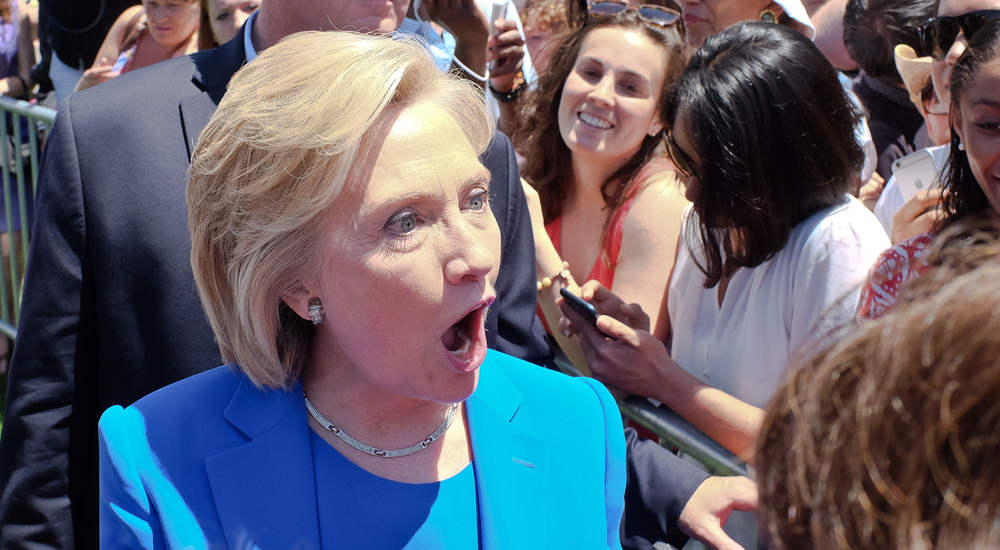 As reported and summarized by our friends at the European Union Times, the following is a summary of the 16th day of Wikileaks revelations. It’s almost impossible to keep up with Hillary’s crimes, in her own words, but this series is an attempt to do just that.

“The whistleblowing website WikiLeaks has released a new tranche of emails from the hacked account of Hillary Clinton’s campaign chair, John Podesta.

The organization had already released more than 26,000 emails by Saturday in a series of 15 consecutive daily releases.

The leaks have offered extraordinary insight into the operations of Clinton’s campaign team, revealing details about Clinton’s Wall Street speeches, ‘pay for play’discussions, Hillary’s “Achilles heel”, and addressing her server scandal through jokes.

Sunday’s release brings the total number of emails leaked online by WikiLeaks to 26,803.

Prominent members of the Clinton campaign team have accused RT of direct involvement in the email hack due to its swift reporting on the WikiLeaks releases, despite the emails being publicly available through the WikiLeaks website.

WikiLeaks has been releasing the Podesta emails at around the same time every day for over a fortnight.

“Hey, when can we meet? I also want to get your Atlas folks to recommend oversamples for our polling before we start in February. By market, regions, etc. I want to get this all compiled into one set of recommendations so we can maximize what we get out of our media polling.”

Playing with polls is a common Democrat-media propaganda tactic.

An email thread from October 29, 2015 reveals the Clinton’s campaign ‘intel’ at work. Chicago based attorney William Mahoney emailed Podesta informing him of an encounter he witnessed between Republican candidate Marco Rubio and Citadel CEO and founder Kenneth Griffin.

“Interesting sighting at our residence in Chicago. Walking in lobby from dinner. Marco Rubio leaving, escorted by Ken Griffin from Citadel – Griffin had small event for him at residence. Super pac money to follow – Thought you should know,” Mahoney wrote.

Podesta replied, “Wow! great intel”, and forwarded the message to Tony Carrk, Clinton’s research director, who commented that the meeting “smells like coordination”.

“So the guy bankrolling the new super PAC that has an ad using her Benghazi testimony is talking with the candidate who is attacking us on Benghazi,” Carrk added.

Hedge fund manager Griffin has been named as one of the financial backers of the Future 45 organization which supports Donald Trump’s presidential run. Future 45 produced the aforementioned video criticizing Clinton over the Benghazi attack in which four US citizens, including Ambassador Chris Stevens, were killed.

Emails dated November 29, 2009 between Podesta and US army officer, Jon Soltz, who served in the Iraq War in 2011, reveal concerns from both men over Obama’s imminent plan on the future of US soldiers in Afghanistan.

Obama announced on December 1, 2009 that he would send over 30,000 additional US troops to Afghanistan.

Soltz, who founded the veteran support organization VoteVets.org, was an outspoken critic of Operation Iraqi Freedom in 2003 in which he had served as a captain. In the emails leaks Sunday, he sought advice from Podesta on how to deal with his reservations about Obama’s proposal.

“I know our members who we have polled don’t support what I think the Obama administration will unveil. We have always been supportive of them, even to be honest when they don’t seem to include us on much,” he wrote.

“Do you have any guidance on how to approach this. Obviously there is a donor component here and we have never really been in a position to disagree with our allies,” Soltz continued.

Podesta responded that he shared Soltz’s concerns, but was short on guidance: “I’m with you man. Not sure on advice. I think it is time to raise questions at a minimum or at least ask for answers from admin.”

Soltz replied that he would follow his gut on the issue, though he sought Podesta’s support on that, saying: “ I have to sleep at night. Just help cover me please.”

The veteran noted that despite his support for the Obama administration, his organization has never been included in discussions about the Afghanistan strategy. Soltz worried that taking a strong stance against the proposal risked exacerbating this.

“Hillary did not have any booth and I did not see even one Hillary button or t-shirt from even one student who cared to support the candidate who would be the first woman president—-not even one!!!”

“Will hopefully be overshadowed by her protest—in which a white guy protested her on super predators and according to the reporters was rejected by the African American crowd.”

Clinton camp hoping a Benghazi protest would be overshadowed by a super predator protester, Sick

“They are reliving the 08 caucuses where they believe the Obama forces flooded the caucuses with ineligible voters. They want to organize lawyers for caucus protection, election protection and to raise hard $.”

If Trump would want to organize lawyers for election protection the DNC media would call him insane and a conspiracy theorist 24/24!

Bernie is for show only, Hillary is running against herself – Wikileaks ID 26449

“Here is the key point, and you know I have been warning about this for months: Hillary is not running against Bernie, she is running against herself, against the perception that she is calculating and lacks principles and causes and a higher purpose to be president and that she is too beholden to inside powers that give her money and an insider system that voters detest in this election, in both parties…..”

“We decided that we SHOULD accept lobbyist and PAC (money) since it’s a bit disingenuous not to.”

I think we have resolved the whole question. Soros is fine with Bing giving directly to c4’s and not the 527. Although, they do think that it provides a story that will be even more focused on him.

Read the Rest of the Story at EU News: