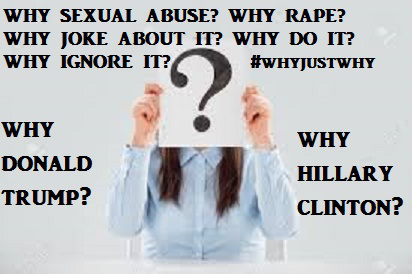 So why, just why would anyone be so obtuse to reality as to not understand laughing about, covering up, lying about, degrading others in spite of overwhelming evidence not demand the end of a political reign of any candidate? What am I talking about? The “locker talk” and it was “her husband” that is the reason for acceptance of Rape, sexual abuse, sexual assault and the disgusting womanizing and in some cases “manizing” for power and control.

Everyone is aware that for years, Hillary Clinton not only has covered up for the sexual abuse, assault, and rape realized but has spent numerous hours laughing her way past these accusations of Bill without remorse, or consideration to those who have been affected.

The question mark in hands of the business woman. isolated. question

During an expunging of bluster and blowhard, Donald Trump went on a diatribe of his sexual subjugation of women. He ran off at the mouth about how women loved him doing so because he was gilded, titillating, and adept at it. This during an extra-documented discussion with a news anchor after an interview. The portraiture was no less than disgusting, perverted, and revulsive.

So as of Monday, October 10, 2016, a movement began quietly but is growing with giant strides towards a nationwide discussion about sexual deviancy, perversion, abuse, and rape. the movement is currently using #whyjustwhy, and asking the pertinent questions to both of the major party candidates.

While Hillary did not perpetrate, that we know of, any of the actions, she is one that abetted and fomented the actions of her husband Bill Clinton. This in itself shows her lack of being able to distinguish between what is right and what is wrong. Then we have Donald Trump with over 30 cases of accusation of some type of sexual abuse.

America seems to have chosen two major party candidates that have a lot of sexual abuse baggage included. IT looks like the American voter is desperately looking for answers.