Why President Trump Should Declassify the FISA Warrant NOW!

The public knows that the application and subsequent renewals of the Carter Page FISA warrant would never have been pursued had it not been for the infamous fake “dossier” material that was created in collusion with Russians through the services of a foreign agent was paid for by the DNC and the Hillary Clinton campaign using money laundered through an attorney.

Obama’s intelligence agencies, Department of Justice, and FBI in collusion with the DNC and Hillary Clinton campaign illegally conspired to create an enormous distraction to the new administration’s orderly conduct of its business and the pursuit of President Trump’s campaign promises.

The illegal activity is well known. Operatives of the DoJ and FBI colluded with the DNC and Clinton campaign to use fabricated “evidence” as the basis for a FISA warrant application (and subsequent renewals) to spy on members of the Trump campaign. The fabricated nature of the “evidence” provided to the US Foreign Intelligence Surveillence Court (FISC) was never revealed to the FISC nor was the fact that the material was bought and paid for by the Clinton campaign and DNC. Had such information been included with the FISA warrant application, no FISC judge would have ever approved of such a warrant (information is required to be verified).

How and when events unfolded:

October 2016:  Having duped FISC Judge Rosemary M. Collyer into approving the initial FISA warrant (whose application was approved by FBI Director James B. Comey and Sally Q. Yates). That warrant was used to “unmask” Carter Page, whose innocence of the accusations against him is certifiable. (It is worth noting that the veracity of the information was certified by an FBI “Supervisory Special Agent” whose name is redacted! Is it reasonable to believe that Peter Strzok was not that “Supervisory Special Agent”?)

This action set the table Deep State operatives in the intelligence services, the DoJ, and FBI to, at the first opportunity, launch a Special Counsel investigation of alleged Trump campaign “collusion” with Russia to influence the 2016 election without any real evidence of any such collusion.

January 2017:  Before Trump was inaugurated, a renewal of the expiring October 2016 warrant was applied for using the same unverified material paid for by the DNC and Clinton campaign, which facts were not revealed to the FISC Judge, Rosemary M. Collyer, who signed the renewal whose application had been approved by FBI DirectorComey and Yates.

In early February, as soon as AG Sessions was confirmed and sworn in, Deputy AG Rod Rosenstein (one of the Deep State colluders) convinced AG Sessions that he must recuse himself from any actions associated with the allegations of Trump campaign collusion with Russia to influence the election. Sessions, lacking the decency to speak with President Trump before recusing himself, acquiesced to Rosenstein’s influence and recused himself on no real basis from participating in any action related to alleged Trump campaign collusion with Russia. The carefully planned “insurance policy” was now beginning to pay off.

April 2017:  A second renewal of the expiring January 2017 warrant was applied for, again using the same unverified material paid for by the DNC and Clinton campaign, which facts were (yet again) not revealed to FISC Judge, Anne C. Conway, who signed the renewal that had been approved by Comey and Senior DoJ official Dana Boente, who had replaced Sally Yates as Acting AG when she was fired in January 2017.

On May 9, 2017, President Trump fired FBI Director Comey on the recommendations of Rod Rosenstein and Jeff Sessions.

Within a few days, Rosenstein accompanied Robert Mueller to interview President Trump to be FBI Director. Mueller was another Obama administration insider who had been FBI Director prior to Comey’s appointment. Mueller was Director when Secretary of State Hillary Clinton was selling approvals to foreign interests in exchange for massive cash donations to the corrupt Clinton Foundation.

A week later, under a DoJ procedure (there is no Special Counsel law) DAG Rosenstein appoints Robert Mueller to be Special Counsel to investigate Trump campaign collusion with Russia to influence the 2016 election. However, the DoJ requires strong evidence of a specific crime as a prerequisite to the appointment of a Special Counsel. Rosenstein never specified a crime (“collusion” is not a crime) nor could he have had evidence for an unspecified crime! This alone is sufficient reason to dismiss both Rosenstein and Mueller for failure to follow proper procedures and acting in an unauthorized position, respectively. The use of DoJ funds to support Mueller’s ongoing unauthorized operations is itself, a crime.

Had Jeff Sessions been up to the job, he could have stopped this procedural farce long ago on the grounds that Rosenstein failed to follow proper porcedures (specifying a crime for which there was certifiable evidence). Mr. Sessions tenure at DoJ will be short and go down as one of the most tainted in U.S. history.

June 2017:  The final renewal of the Carter Page FISA warrant was applied for and approved by FISC Judge Raymond J. Dearie after being approved by none other than DAG Rod Rosenstein and Andrew G. McCabe, Deputy Director, FBI.

The facts that are known are clear and point to massive collusion within the DoJ, the FBI, and intelligence agencies to create a narrative of Trump campaign collusion with Russia, launch a Special Counsel investigation, populate that investigation with highly partisan Democrats with questionable ethical backgrounds and drag on a costly “investigation” of an unspecified crime based on unspecified evidence.

The obvious attack by these Deep State colluders on the sanctity of our presidential election and their ongoing detrimental actions to the improvement of American lives through a successful enactment of the Trump election agenda demanded Congressional investigations.

Those investigations ran into repeated stonewalling and slow-walking of evidence required for proper Congressional oversight.

Members of Congress have seen documents unredacted and, when compared with redacted versions have discovered massive abuse of classification guidelines by Deep State operatives attempting to cover-up the collusion within the Obama administration to influence the outcome of an election.

Mr. Rosenstein is at the center of all of this illegal activity.

He had withheld the FISA warrant material used to unmask Carter Page and has consistently refused to release any information that would justify his appointing any Special Counsel to investigate an unspecified crime.

When the crime is alleged to be associated with the President of the United States, it behooves Mr. Rosenstein to bend over backward being cooperative and making full disclosure of everything he knows about (a) the criminal action and (b) evidence of that criminal action.

Mr. Rosenstein has provided the people with nothing constructive. He has been hostile to Congress and abusive of his position.

It is imperative that the following documents be fully declassified and made available to the public without delay:

These documents must be forthcoming without delay. It is an affront to the people of this country to allow this corruption to persist.

As an example of the “in your face” nonsense facilitated by Mr. Rosenstein, below is a typical page from the FISA warrant and renewal documents: 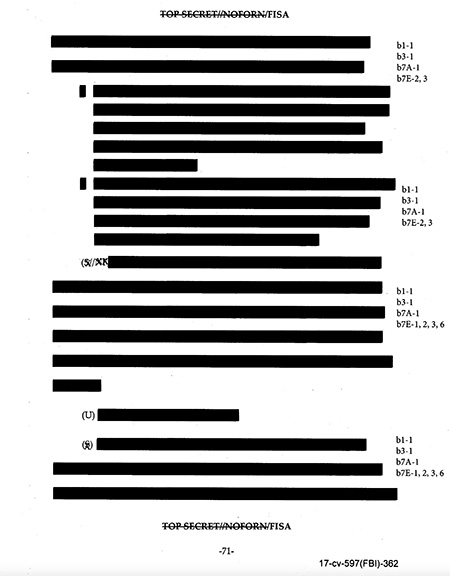 Not only do these unredacted documents need to be made public without delay, there are specific questions that must be answered:

President Trump must immediately declassify all of these documents and insist they be released to the public without delay.

There is nothing more important than rooting out criminal collusion within the highest ranks of government agencies and punishing such criminal activity with the harshest penalties as a deterrent to any future attempts to manipulate an election or post-election administration.