Why Many Americans Are Praying For Trump 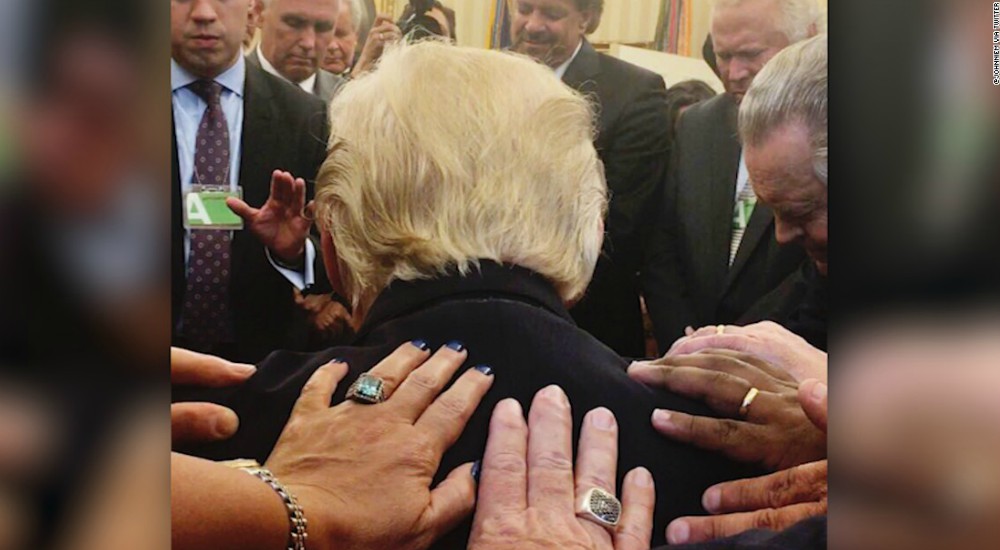 Why Many Americans Are Praying For Trump

Extremely respectful and supportive of Islam, Obama was more hostile to Christianity than any other U.S. president. https://bit.ly/2plTsy0

Mainstream media seek to convince us that a majority of Americans embrace their anti-Christian anything-goes-sexually agenda. The truth is, millions of Americans are disturbed by our nation’s cultural and moral decline. A growing number of TV commercials selling everything from milk to phone services interject homosexuality. I told my wife, “Next they will have men kissing.” Thirty minutes later, a Diet Coke TV commercial featured two men kissing in a cab.

With every new TV drama and sitcom, the question is, in which episode will the show promote homosexuality? LGBTQ are only 3% of the population. https://bit.ly/2CFDyqk Why is there such an intense, relentless push to shove homosexuality into our faces?

While babysitting, my brother overheard the kid video his grandson was watching talk about having two daddies. The video promoted homosexual parents. My brother discarded the DVD.

Some say, Lloyd, get over it. The LGBTQ agenda is the new normal. Why don’t you accept it and move on? Every time we allow ourselves to become desensitized to deviance, Democrats introduce another more evil. Who could imagine Democrats would seek to legalize pedophilia and murdering babies even after they are born?

Rather than backing away from this demonic idea, other Democrat states are pushing to pass laws to murder babies on their birth date. https://fxn.ws/2UyBV41

In a sane world, how could these evil people get elected? Rush Limbaugh theorizes that because Democrats fear the overturn of Roe v Wade, they seek to kill as many babies as possible.

For years, Planned Parenthood claimed abortion was okay because they were only removing an unviable tissue mass, not a baby. Technology confirms that it is a baby. “I knew you before I formed you in your mother’s womb.” Jeremiah 1:5

Planned Parenthood now says it does not matter that it’s a baby. A mother has a moral right to abort her baby for any reason she deems necessary before or after birth. Here is a link to a brief video of an abortion doctor explaining to Congress, in graphic detail, the procedure he used to perform second-trimester D&E abortions. Anyone not extremely disturbed by this video is spiritually ill. https://youtu.be/cjgqfLRuTyo Democrats desiring to murder born alive babies is a whole new level of satanic evil.

Speaking of Democrats rising to new levels of evil, Democrats are pushing to legalize pedophilia. Tom Delay exposed an Obama DOJ secret memo which included pedophilia on a list of 12 perversions it planned to legalize. https://nws.mx/2DUKbGS

Leftists (Democrats) claim pedophilia is a sexual orientation that society should accept. https://bit.ly/2D7pAg9 They will argue that opposing pedophilia is bigotry. They plan to keep forcing pedophilia upon us until we become desensitized or give up pushing back against it. Their narrative is pedophilia is simply another form of love. Who can argue against love? How many Christians will be deceived into embracing pedophilia believing it is what Jesus would do?

“But whoever causes one of these little ones who believe in me to fall away–it would be better for him if a heavy millstone were hung around his neck and he were drowned in the depths of the sea.” Matthew 18:6

The LGBTQ agenda has progressed from supposedly only seeking tolerance to destroying and jailing anyone who does not bow down in worship to their lifestyle.

Americans are beginning to comprehend mainstream media’s unprecedented intense hatred for Trump and his voters. They see fake news media’s 24/7 lies to stop Trump’s America first agenda and to remove him from office. Even some in Trump’s own party are colluding with his enemies.

Americans realize Trump is the only wall between We the People and leftists’ anti-Christian, anti-American and anti-morality tyranny.

Only almighty God can protect Trump. This is why so many Americans feel divinely led to pray for president Trump. Please keep our president in your prayers.