Why is Maria Butina in Prison? 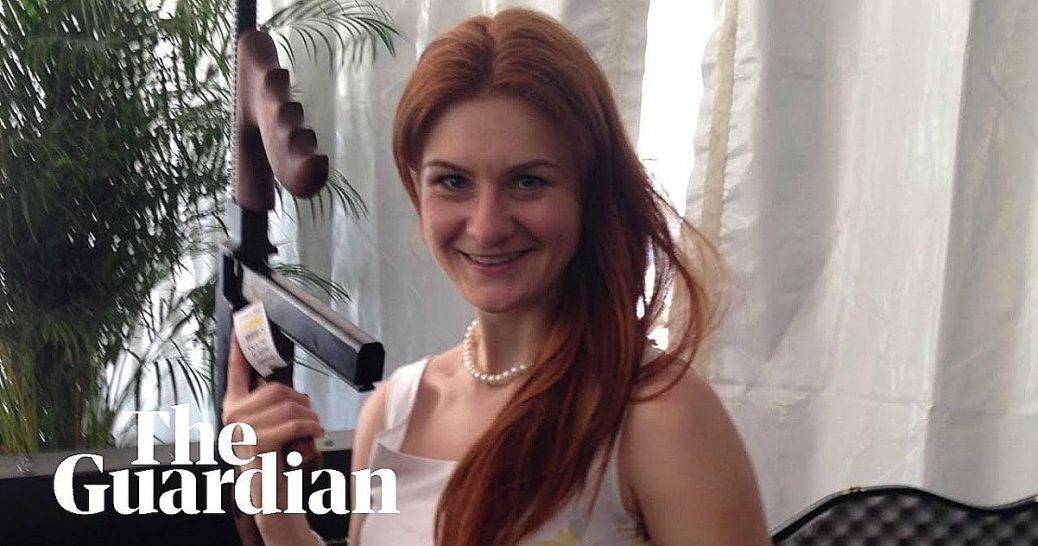 If you believe the mass disinformation media, Maria Butina is just another Russian spy.  She was arrested the day before Trump and Putin met based on the federal statute of being an “unregistered foreign agent.”  It seems that the arrest of Butina is the first time anybody has been arrested on this statute in the history of the United States.  Although the prison term for the lack of registration of a foreign agent exists (five years), so far, the only punishments have been small fines.

There is every reason to believe that Butina is in prison because a lawyer by the name of Veselnitskaya is at large.

These two Russians are not connected by their Russian origin or their suspicious (and suspiciously successful) activities in America.  They are connected because of the inexplicable desire of the Obama administration to see both of them on American soil.

Soon after, Veselnitskaya aggressively began her affairs.  She attended hearings in the Senate and sat on the front row immediately behind the former U.S. ambassador to Russia, Michael McFaul.  Normally, this seat would be reserved for someone who could understand English.  On the eve of her meeting with the Trump team, and right after the meeting, she had dinner with Glenn Simpson – one of the founders of opposition research company Fusion GPS.  This firm, as we now know, acted as an intermediary between the Hillary Clinton campaign and the Russian intelligence services for fabricating the infamous “Russian dossier” on Trump.

Veselnitskaya was invited to dinners and parties with numerous Washington politicians and lobbyists.  Rhetorical question to all readers: “Have you or any of your friends managed not just to get to congressional hearings, but also to sit in the front row, among the most senior guests? How many of you have ever received invitations to dinners and exclusive meetings with the Washington political establishment?”

The answer is unambiguous – Veselnitskaya was directed by those who considered her presence in America in 2016 beneficial.

Now, with Maria Butina, history repeats itself.  She, as we know, unlike ordinary Russians, did not have to wait many months to get an American visa.  She received her visa very quickly, and it looks as though Obama’s secretary of state, John Kerry, helped her.  Just like Veselnitskaya, when Maria Butina arrived in the U.S., all doors were opened for her.  She met with many senior officials of the Obama administration, became a Life Member of the National Rifle Association, and became the mistress of a well known American political operative.

Like Veselnitskaya, this 29-year-old student participated in congressional hearings, not as a spectator, but as a primary participant.  In early 2018, she, for eight hours, voluntarily provided her testimony to the Senate Intelligence Committee.

This did not help her – she was under constant surveillance since her arrival in the U.S.  She was not just watched; she was directed by those who needed her to continue her activities in America in 2016.

It looks as though both Veselnitskaya and Butina worked not for Russian intelligence, but rather for American intelligence, which, under Obama’s leadership, organized full-scale surveillance of his political opponents during the 2016 election campaign.

Of course, they were kept in the dark.  Veselnitskaya and Butina had no idea what kind of work they were doing on behalf of the Obama administration.  Their potential handlers in Moscow also suspected nothing.  As a result, Obama’s FBI used Veselnitskaya and Butina to the greatest extent possible.  By the way, it should be noted here that U.S. intelligence services, which for many decades lagged behind their British, Russian, and Israeli counterparts, still managed to learn a lot.  They advanced in both professionalism and corruption.

After the 2016 elections, political power in America had changed, and Trump’s FBI arrested Butina.  However, embarrassingly for the FBI, Veselnitskaya managed to leave the U.S. in time.

The game in which these two Russians were involved is much more serious than the Magnitsky Act (Veselnitskaya’s primary activity) or the right to bear arms in Russia (Butina’s primary business).  We are talking about Obama’s widespread usage of the state intelligence apparatus to spy on political opponents.  This scandal – Obamagate – is thousands of times bigger than Watergate.

Interestingly, given the wide intended reach of Mueller’s investigation, Butina was arrested not by the special prosecutor’s folks (that is, Obama and Clinton people), but by Trump’s FBI.  Now that Maria Butina is in prison, Trump people work with her.  Furthermore, they made it clear to her: “either you tell us all the details – the who, when, and how – of her being directed to spy on Republicans in 2016, or you’ll get five years in federal prison for not registering as a foreign agent, plus ten years for espionage.  If you cooperate, you will be sentenced for the time you already served in prison, and then you will be deported from the U.S.  It’s your choice.  Either 15 years or you come back home as a hero in just a few months.”

Of course, all of us could be wrong, and maybe Butina is, in fact, a Russian spy like Veselnitskaya.  However, despite circumstances that say the opposite, to be honest, I would very much prefer it.  The point is that the professionalism of these “spies” is much lower than even the level of the clueless Russian spy Anna Chapman.  After all, these Russian “spies” unmasked themselves long before crossing the U.S. border.

If Russian intelligence sends such “spies” to its most important adversary, then America has nothing to fear.