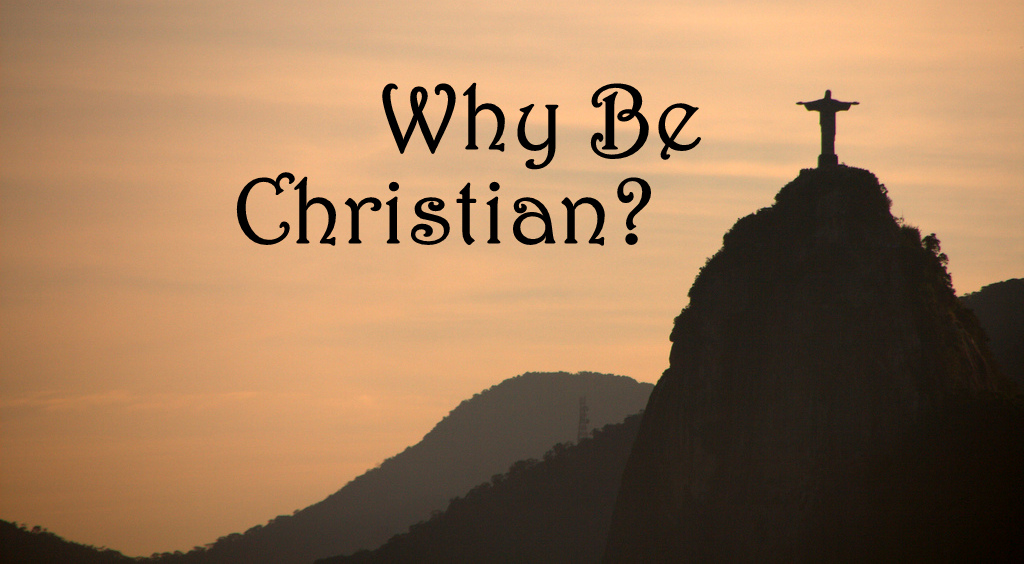 If all religions teach basically the same thing, you know, love your neighbor and all that, what is the point of being a Christian over following some other religion? If all religions are true then what does it matter which one we believe?

Only three of the world’s great religions teach that there is only one god, Judaism, Islam and Christianity. In fact they all trace back to one Patriarch, Abraham. But from there on they began to differ. Islam teaches that the true path is through Abraham’s son Ishmael, while both Judaism and Christianity trace back to Isaac as Abraham’s true heir.

In fact Judaism and Christianity only really differ with their beliefs in Jesus as the Messiah. Christians follow the teaching of Jesus more than the Law of Moses.  But they both come from the same roots.

Both Islam and Judaism accept Jesus as a great prophet. Only Christianity believes He is the long hoped for Messiah, the Son of God.

Many fine books have been written trying to help those who seek an answer to the question of why we should believe Christianity is the right way. I can recommend a couple of them, the first is “Letters from a Skeptic” and the second is “I don’t have enough Faith to be an Atheist.”

These two books answer many of the questions people have about why we as Christians believe what we believe. I can’t possibly do justice to those books and this topic in one short post, but I will, I hope, give you somethings to think about.

The atheist believes that everything just happened, that we are all some kind of cosmic accident. Therefore the Universe and everything in it just came into existence out of nothing. First there was nothing, less than nothing, and then in an instant, everything came into existence for no apparent reason. This oddly enough, is just what the Bible teaches in Genesis, that God spoke the Universe into existence. That is why when the “Big Bang” theory was first postulated, many in the scientific community didn’t want to accept it, because it confirmed the Biblical account.

An atheist though, has to believe that everything came from nothing.

That we just happened to “evolve” on a planet that just happened to be at the right spot in our solar system where the planet was not too hot and not too cold for life to somehow come about.

That the complex human cell and all its parts, that work so well together, just happened.

That there is no real right or wrong, no real and lasting judgement that we have to face once we leave this life, so we should be able to do as we please.

An atheist has to believe that life has no meaning other then what we ourselves give it. No rhyme or reason to existence.

Therefore I have to conclude that there must have been a creator, a master builder and planner and that it’s foolish to believe otherwise.

But who is or was that creator?

Can we know Him?

Does He affect us today?

The Deist believe that there was a creator, but he just got the ball rolling and then stepped back and doesn’t have anything to do with us today. But that view doesn’t explain how many of us have seen or witnessed God’s intervention in our lives. Nor does that belief explain Christ, His birth, death and resurrection.

The complex nature of this world and the interaction of so many species with each other would make it all but impossible for them to have evolved independently of each other. It seems impossible for there not to have been a creator. And this world is so complex and so well designed that it must have had one creator, not many. Just as a fine building has only one creator, one architect, this Universe must have had only one designer.

When was the last time you saw anything complicated designed by a committee, and then work as designed?

All but three of the world’s great religions believe in multiple gods, if they believe in any gods at all. Only Islam, Judaism and Christianity hold to the belief in one God.

Judaism traces its origins back through the Bible, the first 5 books in particular, the Pentateuch, also known as the Torah. Christianity continues those books into the New Testament and claims that Jesus of Nazareth is the Messiah long prophesied in the Old Testament.

Islam on the other hand can only trace its origins back to the early 600’s AD with the teachings of Muhammad who believed that Jesus was a great Prophet, but not the Son of God and did not die on the cross, let alone resurrect three days later. The followers of Islam must believe that both the Jewish and Christian Bibles had to have been altered to a massive degree over the years and that only Muhammad was given the true and final testimony of god.

I for one cannot accept Islam as truth for any number of reasons. It would have us rewrite the Bible starting with the sons of Abraham. It does not, cannot see Jesus as the son of God who came into the world to save it by His death on the cross, followed by His resurrection.

Judaism also does not accept Jesus as Messiah, but at least expects a Messiah to come.  Oddly enough, Jesus fulfills all prophesies regarding the coming Messiah in the Old Testament to a tee.

Both the Old and New Testaments work together to make a complete narrative of God’s message to the world, one of His love and His efforts to reconcile Himself to it.

The Koran on the other hand, sits outside of both Old and New Testaments and must stand or fall on its own.

You have to decide whether or not to accept Jesus as your savior or not. To decide whether Christianity, Judaism or Islam is the correct path, that is a decision that is yours alone.

But to accept the atheistic view that there is no god, no creator and that everything came from nothing is, to my thinking, foolishness.

Just look at the world around you, observe the way it all fits together, not to mention the way the different parts of the body work and fit together and then try to make a case that it is all just some accident.  There is far too much evidence of a creator to believe it all just happened.

Different parts of our bodies, for example, would have to have “evolved” at the same time or to have just sat there doing nothing until other parts somehow manage to finally “evolve” in order to be of any use to the body at all. (How many millions of years would this have had to gone on for?) And this must have happened countless times throughout all the systems of our bodies. And that doesn’t even take into account all the interdependent plants and animals on the planet having to have “evolved” at the same time in order to support each other.

To even think this is what happened is foolishness.

To be Christian comes down to one man, Jesus.

We know that Jesus lived, even if we discount the Bible, there are many other historical sources that talk about Jesus of Nazareth and His life. The fact that a few ex-fishermen, a tax collector and other uneducated men changed the world after their leader was killed is hard to discount. That Paul, brought up in the Jewish traditions, who persecuted the early Christian Church, had an encounter with the risen Jesus on the road to Damascus and went on to write half the New Testament and became, after Jesus Himself, the most important leader of the early Church, is hard to accept as a lie when we have the evidence of his work before our eyes.

As a Christian friend of mine is often heard to say, “You either believe or you don’t.”

The book “Letters from a Skeptic” ends with this sort of question… What if you accept Christianity as true, but it turns out to be false?  If that’s the case, you miss out on nothing. But if you reject Christianity and it is true, you will have missed out on eternity and will forever be separated from God and His Christ.

In the end you have nothing to lose by accepting Christ and everything to gain.

If you have more questions and I am sure that you do, I highly recommend the books, “Letters from Skeptic” and “I don’t have enough Faith to be an atheist.”

May God guide you.

If you still think of Jesus as just a good person, someone with some nice ideas to live by, but refuse to believe He is the Son Of God, then I give you His own words to ponder:

Jesus answered, “I am the way and the truth and the life. No one comes to the Father except through me.”

“I and the Father are one.”

8 Philip said, “Lord, show us the Father and that will be enough for us.” 9 Jesus answered: “Don’t you know me, Philip, even after I have been among you such a long time? Anyone who has seen me has seen the Father. How can you say, ‘Show us the Father’? 10 Don’t you believe that I am in the Father, and that the Father is in me?”

Can anyone who says such things be just a good man we should follow?

Can anyone who says such things be believed in everything else they say, unless they are who they claim to be?

Either Jesus is a liar who claims to be God when He knows He isn’t, or He is insane to believe that He is God when He isn’t.

Or He is who He says He is, “Immanuel” which means “God with us”.

So, which do you believe He is? A liar… a lunatic… or Lord?

If He is Lord, then what are you doing about it?