Why are There Conspiracies? 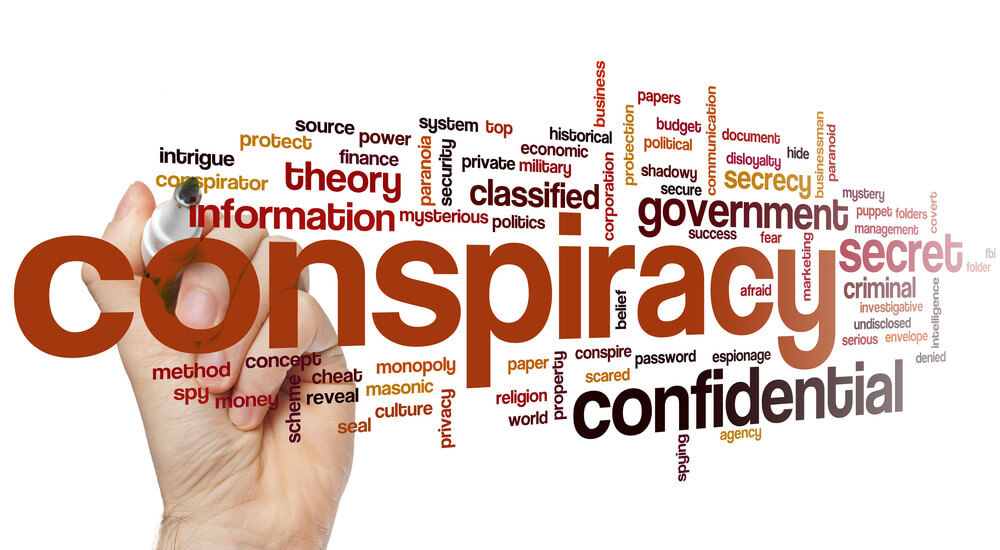 A conspiracy is when a person or group of people secretly plots or plan evil against their fellow man.

Many people just cannot fathom mankind being that evil and the idea of a conspiracy sounds completely absurd.

But, yet, the Bible is loaded with examples of conspiracies. In fact the biggest conspiracy in history happened about 2000 years ago when Judas Iscariot betrayed Jesus Christ for 30 silver coins.

Now there are at least 25 conspiracies recorded in the Bible and I have list them below.

1 Kings 16 – Zimri conspired against Baasha and killed him

2 Kings 14 – the people conspired against Amaziah, son of Joash, and killed him

2 Kings 15 – Shallum conspired against Zechariah, son of Jeroboam III, and killed him

2 Kings 15 – Pekah, an officer of Pekaniah, conspired and killed him

2 Kings 21 – The servants of Amon, son of Manasseh, conspired and killed him

Nehemiah 4 – Sanballet, Tobiah, the Arabs, Amonites and the Ashdodites conspired together to come and attack Jerusalem and create confusion

Esther 3 – Hamon conspired against the Jews

Isaiah 5 – Syria, Ephriaim and the son of Remaliah plotted evil against Judah

Jeremiah 40 – Baalis, the king of the Ammonites, sent Ishmael to murder Gedaliah

Daniel 6 – The administrators and satraps plotted against Daniel

John 12 – The chief priests plotted to put Lazarus to death

As you can see the Bible was definitely not written to praise mankind. But, rather, it was written to expose the evil and wicked side of man and to show that man is a sinner in desperate need of a Savior. And the Savior, of course, is Jesus Christ.

But why do men conspire against their own fellow man? The prophet Jeremiah gave the reason when he said the following.

“The heart is deceitful above all things, and desperately wicked: who can know it?” Jeremiah 17:9

The point of this passage is that man’s heart is so desperately wicked that not even Satan himself knows how evil man’s heart is.

The Apostle Paul, also, explained how evil man’s heart is in Romans 3:9-20 when he said,

<9> What then? are we better than they? No, in no wise: for we have before proved both Jews and Gentiles, that they are all under sin;
<10> As it is written, There is none righteous, no, not one:
<11> There is none that understandeth, there is none that seeketh after God.
<12> They are all gone out of the way, they are together become unprofitable; there is none that doeth good, no, not one.
<13> Their throat is an open sepulchre; with their tongues they have used deceit; the poison of asps is under their lips:
<14> Whose mouth is full of cursing and bitterness:
<15> Their feet are swift to shed blood:
<16> Destruction and misery are in their ways:
<17> And the way of peace have they not known:
<18> There is no fear of God before their eyes.
<19> Now we know that what things soever the law saith, it saith to them who are under the law: that every mouth may be stopped, and all the world may become guilty before God.
<20> Therefore by the deeds of the law there shall no flesh be justified in his sight: for by the law is the knowledge of sin.

Believers in Christ have this same old sin nature (evil heart) that desperately wants to do evil. But when a person becomes a believer in Christ, Jesus imparts His new nature in the new believer. The new nature wants only to seek after righteousness and glorify God while the old sin nature wants to participate in evil and glorify self. Therefore, there is a constant battle in the lives of every believer in Christ (every Christian). That battle will end when Christ returns at the Rapture of the Church. Our old sin natures will be eradicated and we will be given eternal, immortal, glorified bodies that can never sin again.

Therefore Christians, because of their old sin nature and whether they are in government or in the private sector, are not exempt from participating in conspiracies.

Now with the introduction of technology, truth can become suppressed. And, therefore, the more sophisticated methods of technology a country has (especially in the hands of evil people) the easier it becomes to suppress the truth and to deceive the people. So news becomes propaganda and truth becomes a lie. And the common person would never know it.

So what is the answer to this great deception?

The Word of God is the answer to this great deception. God never lies. God loves everyone including the sinner. God loves you and me.

“Sanctify them through Thy Truth: Thy Word is Truth.” John 17:17

“For God so loved the world, that He gave His only begotten Son, that whosoever believeth in Him should not perish, but have everlasting life.” John 3:16