Why Are Leftists Thrilled by Abortion? 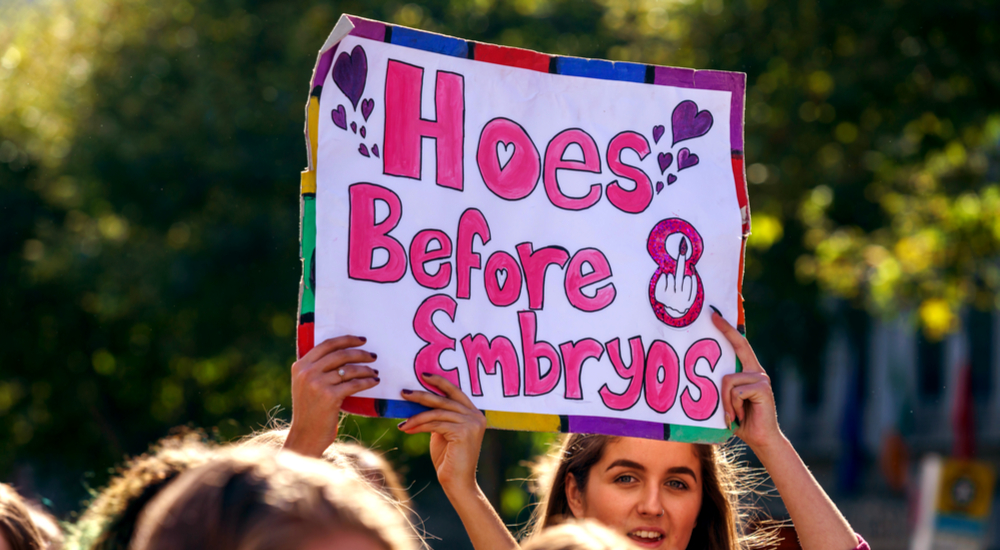 Why Are Leftists Thrilled by Abortion?

Hillary Clinton and New York Gov. Andrew Cuomo announced their satanic bill to allow abortions through all nine months up to birth. The intense jubilant faces of these two Democrats in the photo while launching their baby killing campaign was bone-chillingly evil. Clinton and Cuomo held their joined hands high in the air like an enthusiastic victorious battle-cry as they grinned ear to ear. Why were they so happy? Why were these leftist politicians barely able to contain their excitement over the thought of killing more babies? https://bit.ly/2QGjdFv

During her presidential campaign, Hillary vowed to protect animals from cruelty and abuse. https://wapo.st/2RIzbmR And yet, Hillary is elated over her bill to allow abortion doctors to deliver a nine-month-old baby except for the head; then shove scissors into its brain to kill it. This barbaric, shameful and evil procedure is called partial birth abortion. https://bit.ly/1TQAslN

Abortion zealots fear a conservative majority on the Supreme Court will overturn Roe v. Wade the unconstitutional law which made abortion legal. Here’s how abortion activist Sarah Silverman expressed the urgency of keeping constitutional judge Brett Kavanaugh off the Supreme Court. “This is a position for life, y’all”. In her sad perverted thinking, Silverman infers that women will die if they cannot for whatever reason kill the horrible thing (baby) growing inside them even on the birth date. https://bit.ly/2FnCrhK

Eighty-five-year-old pro-abortion Supreme Court justice Ruth Bader Ginsberg’s health is failing. If she dies or retires, leftists fear Trump’s replacement will be a conservative. Panicked female abortion zealots are offering their body parts to keep Ginsberg alive. Abortion zealot Alyssa Milano offered her ribs, kidneys and a lung to Justice Ginsberg. https://bit.ly/2SR1IEe Notice the intense passion to do whatever necessary to freely kill babies in the womb.

Alyssa Milano through The Fuzzy Pet Foundation compassionately rescued a dog in South Korea being raised for slaughter. It appears that Milano has zero compassion for innocent babies. She is insanely committed to murdering them before birth. https://bit.ly/2H8BawF Also, Milano has not complained about Planned Parenthood profiting from the sales of slaughtered baby body parts.

In 2018, abortion was the number one cause of death worldwide; over 41 million children killed before birth. https://bit.ly/2Rr3SwJ Again I ask, why is this horrifying stat cause for leftists to celebrate?

In a landslide, Ireland voters repealed their anti-abortion laws. Many observers were uncomfortable with the eerie jubilation of thousands of women in the streets hugging while crying tears of sheer joy. https://bit.ly/2sm5FVB

Co-director of the abortion campaign, Orla O’Connor said, “This is a monumental day for women in Ireland. This is about women taking their rightful place in Irish society, finally.”

Another Irish woman thrilled about killing babies said, “ It’s such a great victory for women, for men, for our future generation. It’s just – I’m so emotional.”

“And God blessed them. And God said to them, Be fruitful and multiply and fill the earth…” (Genesis 1:28) Despite God’s command to “be fruitful and multiply”, many youths vow not to have children because leftists have convinced them that childbirth is extremely destructive to the environment. https://ind.pn/2ucA1h2 Leftists foolishly believe they are smarter than God.

Unquestionably, abortion is the holy sacrament of the demonic religion of liberalism. Shockingly, over 20 religious leaders gathered to bless the opening of a new Planned Parenthood abortion facility in Washington DC. President and CEO, Dr Laura Meyers said, “In almost every message to our staff, I talk about our doing sacred work.” https://bit.ly/2RsMSaj What is wrong with these people? How can they claim moral and spiritual high ground killing babies and selling their body parts?

Insanely, a majority of the religious leaders who blessed the new dead-baby-chop-shop are black. A disproportionately high number of aborted babies are blacks. Right thinking black ministers have been sounding the alarm for years how blacks are aborting themselves in extinction. https://bit.ly/1oGRjVA

Leftists are in constant rebellion against God’s natural order. Leftist women act like pregnancy is God’s cursed disease as devastating as cancer and abortion is the life-saving cure.

Abortion zealots do not view abortion as a necessary evil. They are actually thrilled when a mother murders her baby. There is something strange and disturbingly evil about leftists having all the sympathy in the world for animals and not an ounce of sympathy (even disdain) for innocent unborn babies – jubilant when a mother kills her baby.